"Why {are} some people...able to survive the worst and others aren't?" CNN's Anderson Cooper wondered after Cleveland kidnap victim Michelle Knight bravely confronted her adductor Ariel Castro in court.

In a word - RESILIENCE: "an ability to recover from or adjust easily to misfortune or change." 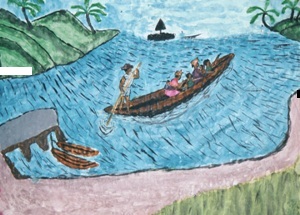 Moving stories of resilience - the Pakistani girl courageously speaking out for girls' rights even after the Taliban shot her in her head or Boston Marathon bombing amputee determined to dance again or traumatized bookkeeper Antoinette Tuff whose empathetic, hopeful words disarmed a disturbed school shooter - inspire us, bring us to tears, and leave us wondering...how we get rebound know-how?

Harvard's Dr. Theresa Betancourt, Associate Professor of Child Health and Human Rights, has devoted herself to answering this question. When we met during a Public Health trip in India, she was fostering resilience in malnourished children of migrant workers. But Betancourt has been fascinated with this topic since her own youth as a 'minority' Caucasian in an Alaskan wilderness Yup'ik community. She proudly described her childhood:

"You saw so much human struggle. The environment and social conditions were challenging. But so many people helped each other through. I became really interested in what you can modify, even in very difficult conditions. Not all kids whose parents were neglectful or struggling with substance abuse or families with violence were doomed to negative life trajectories."

Betancourt continued to observe resilience's "complex ecology of personal characteristics and social influences" while advocating for refugees at the United Nations and International Rescue Committee (IRC). As Director of a Program on Children and Global Adversity at Harvard's Francois-Xavier Bagnoud Center for Health and Human Rights, she has explored resilience in AIDs orphans and Chechen refugees.
International Rescue Committee Center - drawn by former child soldier 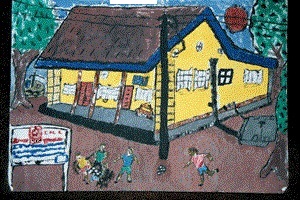 Betancourt's longest resilience project (a collaboration between the Harvard School of Public Health and International Rescue Committee) involves over 500 former child soldiers from the Sierra Leone Civil War. Over 60% witnessed killings, over 1/2 huge massacres, almost 40% were forced to take drugs, almost 1/2 were raped, and over ¼ had killed or injured others. 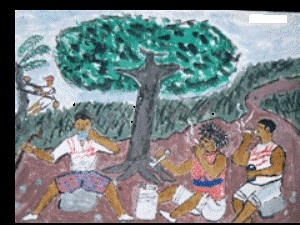 Former girl soldiers faced a "double whammy" - having been part of the violence and being viewed as impure. Amazingly, one girl, Musu, abducted at age 6 by Revolutionary United Front rebels, drugged, forced to commit atrocities, has found her way to medical school. Musu remembers:

"They attacked our village and everybody ran so my mother left me behind because I could not run faster...I was eventually captured by the rebels...During the war,...I saw that the field of medicine was very essential because most of the time people got sick or wounded especially women and children suffered the most during such problems. So I thought if I do medicine I will be helpful to other people."

Although Musu suffered from nightmares, depression, and the community thinking that "anybody who had been with the fighting forces did it voluntarily and they started pointing fingers at you", she focused on her future and intellectual strengths. Musu became a top student and was awarded a government scholarship. Her sister, also a former girl soldier, is studying to become a U.N. humanitarian in war-torn countries, explaining: "I will be able to know their problems because I have also been victim of their same situation." (Interestingly, Cleveland victim Michelle Knight similarly spoke of wanting to help other victims.) 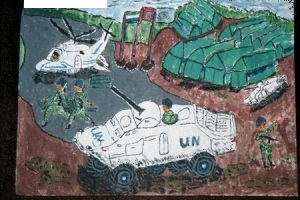 Betancourt feels that the emotional glue connecting those going through trauma together (from abducted child soldier sisters to sister-like Cleveland kidnap victims) helps cultivate resilience. It has an almost fairy-tale feel - children forced into a house of horrors by demented adults escape and live, maybe not happily ever after, but thriving. Betancourt stresses that trauma victims who carve out positive futures often have "strong attachment figures, including mentors". The former girl soldier sisters were emotionally and financially boosted by an uncle en-route to becoming doctor/humanitarians. Ex-child soldiers lacking familial or community support have been less resilient. When Revolutionary United Front rebels threatened 12 year old Sahr's mother, she let them take her son. During his servitude, Sahr was forced to murder innocent individuals and capture others to be raped. After the war, this lost boy struggled to find his way home. When his father died, Sahr became more socially ostracized. A disapproving uncle and community members tried to beat his child soldier ways out of him. Shunned and shamed, Sahr dropped out of school, angrily acted out, and eventually died isolated and alone.

Community stigma, which Betancourt calls "a toxic cocktail for children", leads victims to feel less hopeful about their future. However, if stigma is replaced by support, surviving trauma can result in strengthened self-esteem and optimism. She explains:

"It's a shared vision. We're in a discussion with the Sierra Leonean government and the World Bank to link psychosocial programs to employment programs for more troubled youth who have been struggling since the end of the war."

Betancourt's other current resilience projects include helping underserved people in Haiti, Somalia, Rwanda, the U.S., and India recover from adversity. As she and I walked through a Mumbai slum last spring, she warmly asked resident teenagers, "How do you see your future?" A shy Indian girl thought - this was clearly a new question for her - then suddenly brightened, gazed in the distance past the polluted river/sewer, and shared her dream of one day being a great designer. Later, I asked Dr. Betancourt how she sees her own future. She, too, dreams big - walking the resilient walk towards creating a research hub to nurture resilience tools in children, families, and communities globally: "We've been able to move from on-the-shelf science to real-world realities and say, okay, what can we do?"

With resilience know-how...a hell of a lot.