Joni Blecher is a freelance writer who has spent her career covering tech and a myriad of lifestyle topics. When she's not writing, you can find her exploring the food scene in Portland, Oregon.

In the spirit of Lewis and Clark, the Wright brothers and Charles Lindbergh, April 2, 2015 marked a significant milestone in history: A self-driving car successfully navigated its way across the United States. Sponsored by auto technology company Delphi, the Audi SQ5 drove 3,400 miles, from San Francisco to New York, in nine days.

That's quite a feat, proving that autonomous cars should no longer be relegated to sci-fi movies. The Audi, named "Roadrunner," completed 99 percent of the drive on its own. Engineers only took the wheel when they encountered a few questionable situations, like lane zigzagging. Otherwise, the car managed to steer its way successfully through traffic jams, heat, mountains, and road construction.

This demonstration and many others like it (for example, an autonomous car recently beat a professional race car driver) show the technological advances that have occurred in a relatively short period of time. It was less than 10 years ago that Lexus unveiled a self-parking car that could perform angle and parallel parking. Today, many new vehicles feature self-parking. If a car can park itself, the next logical step is driving itself.

Autonomous cars offer plenty of benefits, including improved safety, increased fuel economy, traffic flow optimization, better road utilization, and of course, all that time people will have on their hands to do other things. According to studies conducted by the National Highway Traffic Safety Administration (NHSTA), driver error was the reason for an estimated 94 percent of all crashes. When you take humans out of the equation and replace them with sensors, multiple cameras, and quick response times, it's easy to see how autonomous cars are safer.

"Barring any catastrophic system failure of the steering, braking, or technology, driverless vehicles will be inarguably safer than what we have today. The real problem is the public perception of such a system failure," said David Carlisle, Chairman of Carlisle & Company, a firm devoted to the global motorized vehicle sector.

While autonomous cars may be safer and better drivers than humans, they aren't the only things on the road. There are pedestrians, bicyclists, motorcycles, commuter buses, 18-wheelers, and kids and pets darting unexpectedly into traffic. These factors need to be taken into account when manufacturers design these systems. Google is already trying to address these issues with a recent cow-avoiding patent. It would help driverless cars identify immovable objects such as a cow, a parked car, or some other obstacle.

New bovine patents aside, some proponents of driverless cars believe that the existing technology (sensors, cameras, on-board navigation systems, and computers) is already fully capable of detecting inanimate objects and responding quickly. While perhaps true, the industry will still need to implement a stringent set of rules and guidelines about how to handle such situations. The players will need to look beyond their own set of interests and work together to create standards and practices. We are in a situation where car manufacturers, technology companies, and other related industries cannot operate in silos. These cars not only need to communicate with each other, but also need to co-exist harmoniously with other elements on the road. 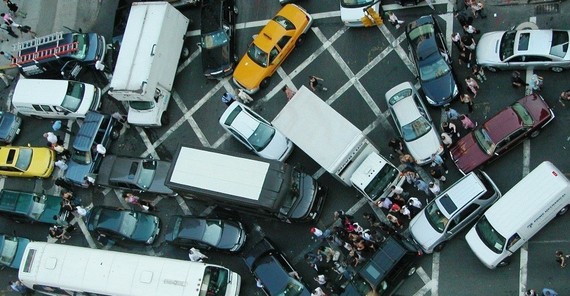 "The more revealing question here is...what does the autonomous car do when it is confronted with something it cannot understand? What's the default?" says Forrest Burnson, Researcher at Software Advice. "Does it just stop right there in the road? If so, it's presumably programmed to stop relatively quickly, and if you're running on the highway at 70 MPH at the time of the event, that's probably not good."

In many ways, the autonomous car is a completely new frontier with its own set of opportunities and challenges. Driverless driving is not just about technology. We need to consider how other industries are affected. Recent research by Carlisle has found that autonomous car technology could lead to a 30 percent decrease in auto collisions. While this will ultimately keep drivers safe, it will also have a major impact on the future of insurance companies, as well as employment in the auto industry, which is projected to drop by 20 percent 2022.

Imagine if today two driverless cars get into an accident. What will determine which vehicle was at fault? Will the autonomous car industry subscribe to its own set of rules? Nevada and California have already begun issuing autonomous drivers' licenses and creating some regulations. While this is a crucial first step, it's hard not to wonder what the driving test encompasses. Lawmakers could be racing against time (and driverless cars) to get new laws into the books.

"By 2017, vehicles from Cadillac and others will offer hands-off self-driving options for highway cruising. What this means is that we are very close to offering cars that operate without driver input for extended periods of time. The sensors are there. The communication protocols are developed. It's safe to say that within five years, most large manufacturers will offer some sort of driverless operation," says Tucker Marion Professor of Technological Entrepreneurship at Northeastern University.

Though we'll see more advanced functionality in high-end cars in the near future, it's unlikely that the public sector will initially be the big adopters. "It may be a long time before affordability enters the picture," says Alex Brisbourne, CEO of telematics company KORE. "For example, the self-driving Prius that Google featured in its 2012 demonstration video costs around $320,000 to build. Adoption would bring incremental cost decreases to be sure, but there's still a long way to go before the technology could realistically fulfill its vision of giving immobile folks a newfound independence and freedom with mobility."

It's more likely that we'll first see adoption of autonomous vehicles in the trucking industry: when taking into consideration fuel consumption, commercial driver costs, and schedules, that industry is likely to reap the benefits from it faster. Autonomous trucks on highways--that's what's most likely in our near future.

"In the U.S., we have approximately four million miles of highways. About three percent of those lane miles are devoted to interstates/freeways/expressways, but that three percent also accounts for about 30 percent of all vehicle miles travelled. Initially, the most likely future will see driverless vehicles using these high-capacity roadways," adds Carlisle. 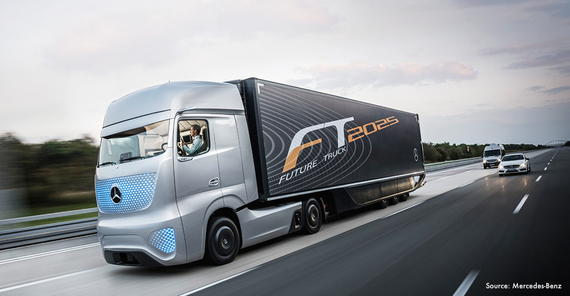 The Mercedes-Benz Future Truck 2025 uses four radar sensors, a 3D camera, and communicates with other vehicles on the road via wireless communication.

Mercedes-Benz has already introduced a self-driving semi-trailer. Dubbed Future Truck 2025, the cabin looks more like a high-end RV rather than a typical trucker's long-haul lodging. In what looks like luxury Virgin Airlines decor, Future Truck is equipped with LED lighting, monitors, tablets, and a seat that rotates 45-degrees. That's right. No need for the trucker to always keep his eyes on the road. On-board is Daimler's Highway Pilot System, which uses four radar sensors and a 3D camera to view the area within 200 feet. Along with this system, the truck uses relevant road data and communicates with other vehicles on the road via wireless communication. In recent tests, Future Truck did well going 53 MPH on the open highway. Still, the company sees this as an aid, not an option for replacing long-haul truckers.

It's not shocking to consider that self-driving cars will likely make their splash in the commercial sector first. That's the technology lifecycle. There's a great idea, but it's expensive to implement, so large businesses find a use for it that drives down the cost enough for the technology to then become accessible to consumers.

What will it take for consumers to jump on this ride? There's definitely a divided sentiment on the topic. Bring it up at a dinner party and you'll quickly be the center of the liveliest conversation in the room. Perhaps the answer lies in another commercial industry: taxis. Google and Uber are both working on a driverless, taxi-like option. Such services create an affordable way for people to "experience" being shuttled around by an autonomous driver. Similarly, convenience will also play a big factor in adoption.

"Full self-parking cars sound pedestrian compared to highway automation, but the capability actually has an outsized impact on convenience (your car picks you up and drops you off), garage space utilization (cars park impossibly close to each other, with no need to exit the vehicle), and even short-range autonomy. Imagine being able to rearrange fleets of corporate or campus vehicles overnight so they're located where they're needed, not where they were left the night before," said Brian Cooley, Editor at large, CNET.com and/or Host, CNET On Cars. 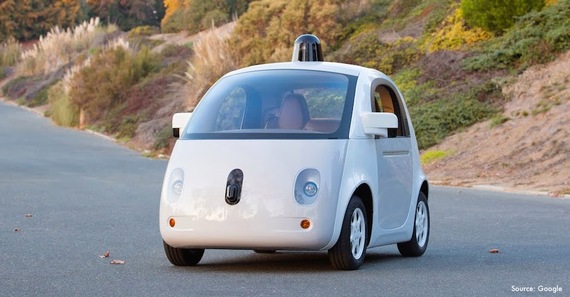 Is the future of transportation filled with small electric pods like this Google Car prototype?

While these are good starting points for garnering public interest, affordability and implementation will be the real keys to success. Consider that automobiles were first created in the early 1800s. However, it wasn't until nearly a hundred years later, when Henry Ford introduced the Ford Model T, a mass-produced car that the working class could afford, that cars became a mainstream commodity. It wasn't an easy task. In order to produce and sell these cars, Ford needed to take the Association of Licensed Automobile Manufacturers (ALAM) to court. At the time, the organization held the patent on the "automobile" and could essentially decide who could build cars and who couldn't.

In much the same way, there may not be patents that act like a monopoly, but other issues will arise. "Being careful about the quality of the engineering is paramount to overall acceptance. The benefits are inarguable. It's all about execution," says Cooley. "The really important part is the new classes of services that will arise around people's behavior and lifestyles when they no longer have to drive. It changes everything. Who will have the best suite of logistic services to take advantage of self-driving cars?"

While it's true that we're seeing more demonstrations of autonomous cars out-performing humans behind the wheel, adoption isn't going to happen overnight. Though when it does, human-driven cars may be relegated to museums. Perhaps Elon Musk, the visionary CEO of Tesla Motors, is correct: "It would be like an elevator. They used to have elevator operators, and then we developed some simple circuitry to have elevators just automatically come to the floor that you're at ... the car is going to be just like that."