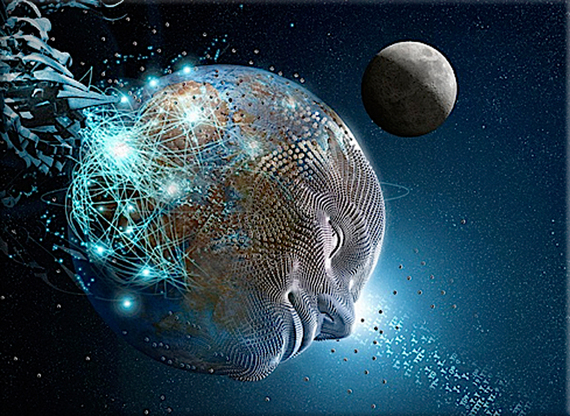 In the 21st century, we are walking an important road. Our species is alone on this road and it has one destination: super-intelligence.

The most forward-thinking visionaries of our species were able to get a vague glimpse of this destination in the early 20th century. Paleontologist Pierre Teilhard de Chardin called this destination Omega Point. Mathematician Stanislaw Ulam called it "singularity":

One conversation on the ever accelerating progress of technology and changes in the mode of human life, which gives the appearance some essential singularity in the history of the race beyond which human affairs, as we know them, could not continue.

For thinkers like Chardin, this vision was spiritual and religious; God using evolution to pull our species closer to our destiny. For others, this vision was a fiercely secular and naturalistic technological utopia designed on scientific principles alone. The rapture for the nerds.

Today the philosophical debates of this vision have become more varied, but also more focused on model building and scientific prediction. The closer we get to our destination, the clearer we can see this world. In the early 20th century Chardin could only generalize about its features. In The Phenomenon of Man he described the Omega Point as "super-personalized" and "infinitely enriched".

It's hard to make real sense of what this means.

In contrast, today we can define the specific mechanisms that could realize a new world. We can actually see the singularity. We can actually touch it in laboratories around the world. Sometimes, we actually experience it in the real world of 2014. Modern theorists can describe it so well that it becomes real to the mind, making our present world seem hopelessly barbaric and painfully primitive. Even embarrassing.

One of the best descriptors of our potential future world was explored in a recent paper by cyberneticist Francis Heylighen titled: Return to Eden? Promises and Perils on the Road to Superintelligence.

Here I summarize the main technological mechanisms as described by Heylighen. I hope you will quickly realize the point of this exercise. In 2014, we live in a world with global brain technology. We live in a world where the consequences of our technological actions demonstrate that the possibilities of utopia come dangerously close to the possibilities of destruction. For example, drones can give us an automated distributed network with the ability to give anyone, anything they want, in a negligible amount of time and for negligible cost. Or... drones could be used to kill children in the developing world.

So far we've chosen the peril first, and planned for the promises second. With the technology yet to come, we must do better. We must prudently walk this road towards the promises, while avoiding the perils in their entirety.

Global brain technologies give us the possibility to have the entirety of humanity interacting with omniscient knowledge bases. We are building computers to learn and communicate with humans in a personalized way. The more stored data we have to play with, the better we can design technologies to harness these data. Every single individual, from birth-to-death, can interact with a system that knows what they know, and knows what they need to know. Every individual can have a omniscient personal assistant to guide them through life and help direct them towards their desired goals. The omniscient knowledge base may even be able to recognize an individual's desired goals better than the individual, and make suggestions for future contemplation.

We have a whole host of emerging technology to enable practical omnipresence. As we start the construction of a planet with *everything* connected to the internet, we take steps towards turning humanity into a *single-information-processing-unit*. This is the essence of global brain. Wirelessly communicating smart-technology should be able to immediately recognize any perturbation within our system, whether that be a fire, a murder, a transportation disaster and deploy the necessary mechanisms to resolve the situation or prevent it from ever happening in the first place. This grid should also allow for the efficient regulation of our entire transportation and energy grids, eliminating any physical friction so common within industrial transportation and energy grids.

Our present-level of abundance has almost everything to do with industry. Today, we are building the industrial internet, and this will transform production in ways that should give us practical omnipotence. We should be able to manufacture anything we want, for negligible cost, right from our own homes, within a negligible amount of time. This will transform production and consumption of all physical objects (e.g., food, organs, homes, vehicles) in a similar way to how digital technologies have transformed books, movies, and music in the past 20 years. In the global brain, anyone can be Henry Ford.

This is the hardest to justify with mechanisms. We need extrapolated trends, correlations, and natural philosophy to help us justify the assertion that practical omnibenevolence is achievable in the global brain. From what we can tell, the better educated people are, the greater their collective wealth, and the more they know about other peoples and cultures, the less violent and competitive they become. In a world of abundant education, resources, and hyper-connectivity, we should see a system emerge that is built on cooperation and abundance, as opposed to zero-sum competition and scarcity. Global brain should be the end of murder, war, slavery, prejudice, suppression, dictatorship, corruption. We should see a flourishing of human potential and justice.

This Road has Perils

This is not an easy road to walk. Super-intelligence is within our grasp. Temporally speaking, we're closer than most realize. The last few metaphorical kilometers may be the most difficult, or they may be surprisingly easy. No one really knows. But we do know that emergent technology can theoretically be used for global horrors, just as they can be used for global paradise. From my perspective the road can't be avoided, as evolution can't be stopped. But there is no way of knowing with 100% certainty whether we will successfully make the journey. It will take intelligent decision-making from our most powerful institutions. That takes evidence-based distributed decision-making, as opposed to ideology-driven centralized decision-making. They must be willing to make this change now. And yet I fear they won't. Maybe technology will re-structure them for us, or maybe we must actively change them ourselves. Maybe a combination of both approaches is the key. We do see signs of hope.

For more read: Return to Eden? Promises and Perils on the Road to Superintelligence