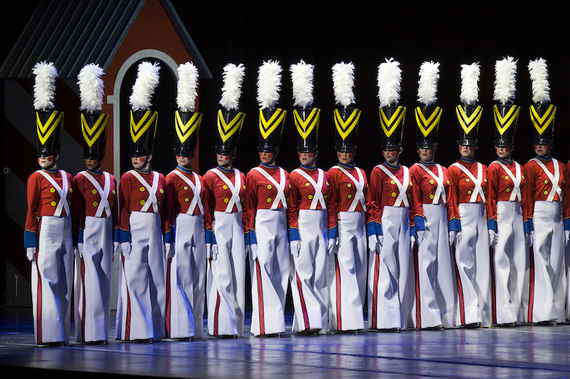 The New York annual holiday tradition of the Radio City Christmas Spectacular returns in all its glory. Rockefeller Center is without question the heart of Christmas in New York City. The Christmas Spectacular is a big part of what makes it so magical. The show closely resembles last year's top-notch production with some slight modifications that only enhance the extravaganza.

The iconic Rockettes remain supreme with their eye-high kicks, razor-sharp precision and synchronized choreography. They prance as reindeer, dance as teddy bears, march as wooden soldiers, and tap as rag dolls, all to stunning effect.

The show's kid-friendly story revolves around two brothers searching for a Christmas present for their sister. They run into Santa who offers his help despite the older brother's disbelief. Thanks to Santa's magic they're whisked off to the North Pole where they find the perfect gift.

Santa, played by the engaging Charles Edward Hall, remains Radio City's quintessential jolly old elf. He effortlessly interacts with the audience and has the children in the palm of his hands. The brothers, Patrick and Ben (played with enthusiasm by Mateo Lizcano and Landon Maas at this performance) hit just the right notes and wisely avoid being too precocious.

But the show is more spectacle than story, with the Rockettes as it's most valuable players. Their signature "Parade of The Wooden Soldiers" is still, after eighty-three years, a feast for the eyes. It's hard to pick a favorite considering the sheer variety of fascinating numbers they do. The multiplying Santa's in "Here Comes Santa Claus" and the tap dance count down to "The Twelve Days Of Christmas," are both showstoppers.

Video projections and state of the art technology add to the holiday proceedings. Choo-choo train images ride the walls of the theatre and GPS-guided snowflakes fly over the audience. Squeals of delight from the children around me were infectious. Yet it's the 3-D animated film sequence "Santa Flies to New York" that's the most eye-popping. It continues to be one of the technical highlights of the production.

Director-choreographer Julie Branam holds tight on the reins, expertly guiding her enthusiastic cast. The numbers are crisp and full of vitality. Not a misstep throughout, the show seamlessly transitions from scene to scene. It also looks like there's been some sprucing up in the choreography for the ensemble members. Their dancing is much more fluid and utilizes their technical prowess. Kudos to the dancers and singers who add an extra sparkle this year.

Take your cue from Harold Arlen's famous song, "Get Happy"--"Forget your troubles, come on get happy" at the Radio City Christmas Spectacular this holiday season! It's guaranteed to chase all your cares away.

For more information on the Radio City Christmas Spectacular, which runs through January 2nd, click here.

Bob Rizzo, a Contributing Writer for ZEALnyc writes frequently on Broadway and Dance. More information is available at his website, The Dance Coach.

'Natalia Osipova and Artists' Present a Mixed-Bill with Mixed Results