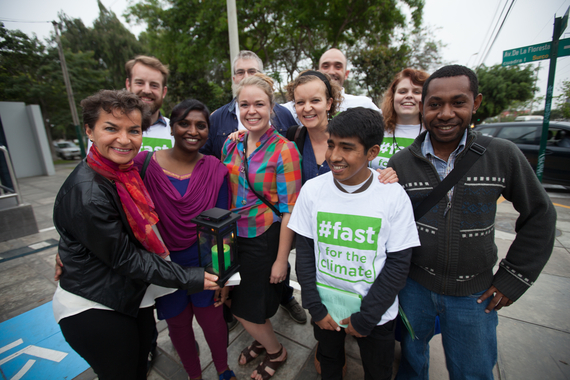 Young Lutherans from all over the world with the UNFCCC Executive Secretary Christiana Figueres. Photo by LWF/Sean Hawkey

This is a story about a green candle. And about some of the religious impact during the last UN Conference on Climate Change.

I participated by leading the delegation of the Lutheran World Federation and working with the international movement Fast for the Climate.

So, what can religious actors and people of faith bring to these negotiations?

Is there any use for a Faith Based Organization (FBO) at all to spend time, money, energy in these conferences?

I have been at COP20 for two weeks now, and I've watched everyone gradually grow weary. There have been exciting and enthusiastic moments, but none of them have lasted long enough to make up for the frustrations, the moments of doubt. At the end of the Conference, when a "meaningful outcome" should have been negotiated and agreed upon, the fatigue was visible on everyone's faces.

Also, many of my colleagues from different FBOs have grown tired two long weeks of continuous meetings, discussions and campaigns.

As a believer, this is what has helped me during the difficult moments: Stepping back, finding myself and my God in the silence, finding reassurance in the beliefs of my Christian values and reflecting on the responsibilities that we all carry. Doing this does make a difference.

However, could there be also a difference for the negotiators and for the negotiations itself? I dare offer one individual, incomplete perspective on the role of religions, starting from the individual level up to the collective impact.

Along with their political identities, most of the negotiators are also believers. This was visible in the COP20 prayer room where individuals came regularly to pray or meditate.

Sometimes I would ask myself: How does everyone face their God with the heavy decisions they need to take? What would they pray? Don't they need a pastor, imam or rabbi to listen to them, sometimes? Some confidential place where they can share the burden and concerns they carry?

As people of faith in this conference, we could offer some of those accompaniment. It might relieve some of the stress and harsh tone that we often witness during the COP.

2.The peaceful message of protecting creation in all paths of life

During the Climate Change Conference, there were regular meetings between people of faith. By working together we learned from each other.

Did you know that in Buddhism the three unwholesome roots are ignorance, anger and attachment (which we would today translate to greed)?

And that in the Koran it says "Corruption has flourished on land and sea as a result of people's actions and He will make them taste the consequences of some of their own actions so that they may turn back." (Qur'an 30:41)

Or, that Pope Francis recently mentioned that the biggest threat to humankind today is "globalized indifference"?

There are so many more sacred texts and believers that also could be quoted.

There are, after all, other forms of wisdom that encapsulate more than just knowing where to locate the commas and period in the negotiations' texts. 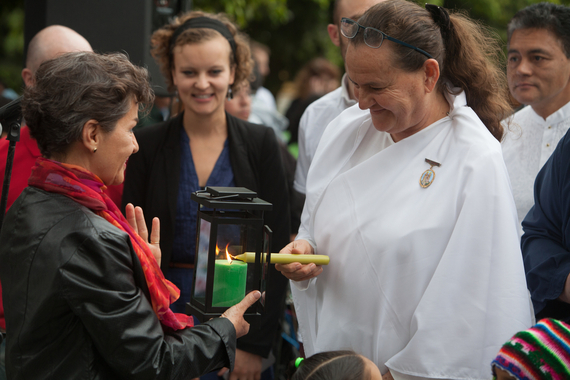 Handing over the candle as a symbol of prayer, hope and communion. Photo by LWF/Sean Hawkey

3.Changing the tone of the conference

One of my Buddhist colleagues shared his vision with me, "If we could make every one of the negotiators share only once about their own opinion, about their personal, spiritual and human motivation and worries about climate change, then we might have an outcome after one day."

Maybe the artificial system of such a conference is not enough to discuss and find solutions for the climate crisis. We need more valuing of the creation in all its expressions and our relationship to our neighbors, the creatures, and the nature. This togetherness and connectedness might bring about the change that the stacked negotiations need.

It was interesting to witness, how in this summer season in Peru, informal meetings and briefings would take place outside and chairs were moved to the grass areas and under the tress instead of being seated on concrete or inside the rooms.

Those meetings where normally filled with a different spirit, as well as a sense for the elements and creatures surrounding us.

4.Expressing our concerns together

As young LWF delegation we also organized - for a third time, more specific "interfaith youth meetings" in order to invite young people of faith at the negotiations to come together.

Inside the Conference, there were regular interfaith network meetings. What set the tone was prayer or a moment of silence at the beginning and at the end. Between those observances of a divine power in the room and also in the conference itself, we had our interfaith conversations.

The main challenge of the FBOs was to not have an official status as "religions" within this process. There were nine official civil society groups (Business and industry; Children and youth; Farmers; Indigenous Peoples and their communities; Local Authorities; Non-governmental organizations; the scientific and technological communities; Women; Workers and Trade Unions) but no official representation from a sector which comprises religions. This gave us limited access to the negotiations itself, and hindered us from having the ability to speak out and make the voices from the people of faith heard.

Yet, there was high interest in the role of religions in the climate change negotiations.

The direct and regular communication between the UNFCCC Secretariat and the Interfaith Network was one proof of curiosity, urgency and hope.

There was one more perspective: Religious communities had an impact on the daily lives of their members. The major decisions of the climate negotiations are not taken during COP, but on the national level. This was where religious communities could have a strong impact when advocating effectively and passionately for climate justice.

Finally, there could be a direct impact and you may decide if you consider this example as symbolic or religious.

In Lima, the interfaith community of Peru organized several events, including an Interfaith Candlelit Vigil on the eve of the opening of COP20. They invited the president and the UNFCCC Executive Secretary and to join, speak to the believers and to share a light.

This light was carried inside the Conference venue. We were moved to see that very candle on the panel during the opening ceremony. 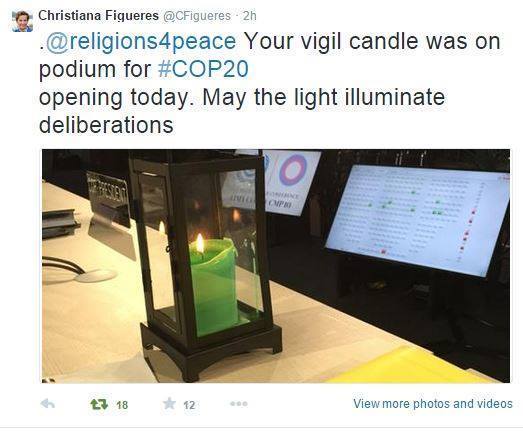