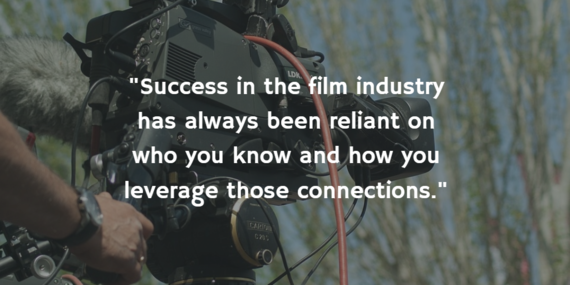 Films are about bringing people together and sharing ideas. We watch trailers, connect with our social circles, and then share the cinematic experience. Before the advent of social media, word of mouth was the only true method of accomplishing this -- aided in part by previews and ads in periodicals. As Hollywood and technology progressed together, newer and more modern ways of reaching the public were adopted. Television and the internet expanded that reach to homes across the globe. The most recent permutation can be found in modern social media. Facebook, Twitter, and the mobile phones they're accessed from all play an important role. Millions are connected and seemingly immediately accessible. Social networks are an excellent location to build awareness and promote a film. Social media was what made it possible for the Star Wars: The Force Awakens trailer to garner over 1 million views in the first 23 minutes.

The internet is filled with clearly defined groups and fandoms that frequently overlap. 20 years ago, marketing a brand new sci-fi film could take significant market research to determine where and when to market it. Social media groups, categories, and hashtags allow you to specifically target a particular demographic with similar interests. The process is the same -- connect to your audience and provide compelling content for them to share. A Pew Research Center study indicates that the average Facebook user is connected with 338 friends. Sharing a movie trailer across that network has a much wider reach than word of mouth alone.

When videos or marketing campaigns go viral, all bets are off. This type of reach isn't limited to big studios either. Savvy independent filmmakers that build up a large social media presence can promote their own films and projects. Not all indie filmmakers will have an audience of thousands or millions, but even a grassroots marketing campaign can spread like wildfire if the right group catches wind. One particularly effective tactic is is reaching out to a dedicated fanbase (hint, it's a built-in market). If you're producing a paranormal thriller that features horror-film creatures, why not reach out to the ever-dedicated Supernatural fan community?

You never know, you just might reach the attention of a big name with large influence. Social media has the power to generate buzz with fans, but it also can connect you directly to producers, actors, and writers -- all very handy to have in your corner. Success in the film industry has always been reliant on who you know and how you leverage those connections. Think of social media as a direct line to individuals and groups you'd never have access to otherwise. This is an opportunity to build trust and cultivate relationships with influential brands and groups. This comes with a caveat -- poor interactions can backfire in the worst way.

If you're building a social media presence as a production studio, you should be particularly careful in how you handle social interactions online. Sensitive topics must be handled with care and empathy. If your film contains age-restricted material, be sure to clearly label it. This warning extends to your tweets and posts: Don't do anything you'll regret later. When in doubt, remember that positivity and professionalism win out in nearly every situation.When films are released, fans are eager to share their opinions online. Praise and criticism may both be directed toward official pages of films, production crew, or actors. Legitimate complaints shouldn't be ignored, though a quick reference with your PR professionals beforehand is advisable. Generally speaking, it's best to be cautious when engaging critics in any way other than to thank them for their feedback.

Social media is a vital part of engaging filmgoing audiences. The business has always been about who you know and who you can reach, and social media expands your capability to build connections. Engaging your fans directly can build excitement and trust in your projects by making them feel like they are part of the process. With a smart strategy and an open mind, social media can catapult your project into the spotlight.