The Brooklyn of hipster Williamsburg, hip hop and hoops at the Barclays Center, and literary Park Slope has made living there now a haven for the young, svelte, super cool and artsy. But there was a time when Brooklyn evoked nothing but reminiscences of classic egg creams and the heart-breaking Dodgers, ethic strivers and working class families with nothing but dreams of departure from their beloved borough. 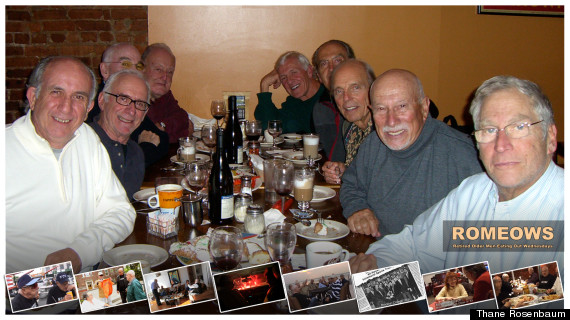 The ROMEOWS (Retired Old Men Eating Out Wednesdays), directed by filmmaker Robert Sarnoff, is a valentine to Brooklyn and to the men who came of age there in the 1950s -- in this case, all Jews who have known each other for over 50 years since their Brooklyn College days when they lived in the same dorm and essentially created their own unofficial frat house. (Some of them actually met in grade school.) Through divorces, disappointments and playing out the plot lines of their lives, the one constant has been their commitment to each other -- and the weekly Wednesday night dinners at restaurants all over Brooklyn.

Part Seinfeld, part My Dinner with Andre, and with a dash of That Championship Season just for seasoning, Sarnoff (who is also one of the ROMEOWS) and his band of merry Jewish men leave no subject unturned: politics, the economy, happiness, the success and failures of children, sports, their past and present dating foibles, even the comfort of toilet seats.

The conversations are lively, witty and humorous, and since their excellent genes are very much on display, I feel that it is important to compliment their cast-iron stomachs. Not only do they not shy away from any topic of conversation, for a bunch of older guys they seemingly have no compunctions about cuisine. They'll eat anything (yes, of course, we see them eat hot dogs while arguing at Nathan's Famous in Coney Island), but I've never seen this many Jewish men of a certain age consume so much unkosher shrimp.

There are a few honorary women, also from the Brooklyn College classes of the late 1950s, who are occasionally invited to these ROMEOWS' senior soirees. And so the perspective of what it meant to grow up in Brooklyn as a Jewish girl and attend Brooklyn College is not left out of the film. And since these older men don't shy away from sex, either, it's important that we seen them interact with women -- even their wives, who also make a few brief cameos with their ROMEOW beaus. (Back in the day, the ROMEOWS were far cuter and more athletic, which we see a glimpse of in watching them shoot foul shots and throw a football without any complaints about the arthritis in their knees.)

United States Senator Barbara Boxer, from California, appears in the film, not to discuss politics but to reminisce along with the ROMEOWS about what made their insular Jewish Brooklyn such a special place. And Boxer is not the only one who travels long distances just for these ROMEOW reunions.

The documentary is really a love story masquerading as a period piece. These Wednesday night dinners offers an intimacy and weekly homecoming that few people truly experience in their lives, and as one of them, who happens to be a doctor, suggests, this human connection has no doubt contributed to their robust longevity.

Sitting in Brooklyn College's cafeteria, occupying the very same seats from long ago and recalling all the various Jewish cliques that still feel alive to them, one of the ROMEOWS says wistfully, "This cafeteria is where we got our education, where we learned about life."

Indeed, their return to Brooklyn College for their 50th Reunion in 2009, all dressed in their golden caps and gowns, intercut with black and white photos of the same men, fifty years earlier holding their diplomas, is one of the true highlights of the film.

The world was all theirs in 1959, and yet as the children of immigrants they carried around that obligatory look of fear, promise and wonder. Not a single one of them could have imagined that they would one day all star in a movie, over fifty years later, that pays tribute to their long-lasting friendship, and how they simply refused to abandon Brooklyn, that borough that so lovingly made them.