A few months ago, I took 20 of my University of Tennessee students to New York for a drama course that included, among other things, Lin-Manuel Miranda's Hamilton. If you happen to have missed it, run--don't walk--to your favorite music app and download the soundtrack now; tickets to the show are all but impossible to get. This brilliant retelling of the American revolution and the pivotal role that Carribean immigrant Alexander Hamilton played in it features only one white actor in the principal cast, and he plays King George III. I once had someone ask me if the musical was meant as a parody or a satire. It's not; it's as serious as a heart-attack about the American story. Interest in the musical (largely through the cast recording) has exploded because of the genius writing and stellar performances, but also because people of color get to take part in the mythologized story of our upstart nation, young, scrappy, and hungry, where anyone could make it. They don't have to play the slaves, the servants, or be invisible, though it took a revolutionary American musical to imagine it. In this version, George Washington is a 6'2'' black man with a shaved head, and believe me, when they sing "here comes the General," he is George Washington. It's a revelation.

Today, three of the students from this class (one white, one black, one a Korean exchange student) presented me with a hand-crafted sign for my office door that says "The room where it happens," with a finger pointing to the doorknob. 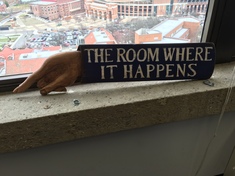 I started to cry. I believe that the university is the room where it happens, but I'm starting to worry about who will get to be in that room. The wealth gap, declining public funds, and a virulent new strain of hateful anti-intellectualism that labels respect for human rights as "political correctness" are real threats. Just last April, neo-confederates and KKK members threatened one of our students organizing a Stand With Baltimore rally with such vile, viciously racist messages that my stomach still clenches at the memory. They then vowed to show up with guns to the protest and "shoot some n---." Her sense of urgency in planning the rally was spurred by the fact that a few weeks before, a student had flown a rebel flag off a dorm balcony. Other students I know have endured slurs hurled from passing cars and the day-to-day struggles of being suspected, misread, or generally treated as second-class citizens because of their race or gender presentation.

On March 2, 2016, the Tennessee Senate Education Committee (which, believe me, I wish were a committee designed to educate the Tennessee Senate) voted to strip funding for diversity efforts at UT. The move comes as the university is attempting to rectify long-standing racial imbalances in our student population and to address our embarrassing and rising ranking as one of the most homophobic schools in the country. This big-government meddling could also cost us our accreditation. We're working to improve access, to prepare our students for a more interconnected and global society, and to foster a culture of civility and meaningful debate, but we're undercut by legislators' attempts to score points with manufactured campus crises, like the fake war on Christmas or FOX News' false story that everyone on campus had to use gender-neutral pronouns. The problem is that the fake crises have generated real legislative threats to the university's budget (only about 18 percent of which is state-funded) at a time when state tax revenues are up. There is no fiscal emergency. There is no war on Christmas or mandatory pronoun change. But there is a real threat to our shared future that comes from paranoia, xenophobia, and old-fashioned racism.

The tone is even worse in the presidential race, where the American dream of democratic self-governance may be slipping away. Instead of debate and policy, we have insults, meme wars, 3-second videos, political rallies at which young black people are literally pushed and shoved out of the room by white men, and a candidate who talks about his penis size. In such a degraded climate, education becomes a target because, when we get to do what we do best, we produce strong citizens. Education is not elitist; it's American. But there are those who would rather have a more tractable, easily swayed, and less educated public, consumers and customers rather than students and citizens. When someone can't tell the difference between an argument and an assertion, between a platform and an empty platitude, between a fact and a falsehood, it makes fear mongering easier. It's easier to distract people from the cavernous economic gap between the rich and rest of the 90 percent of us, the environmental degradation that continues to profit large corporations, and an election system so twisted by gerrymandering and money that only the most persistent and optimistic will participate. Politics (which was never a pure business) becomes the theatre of affect. Politicians succeed by stirring and then manipulating strong negative emotions, directing them at convenient targets and demonizing whole groups. Leaders give way to demagogues who stir wars of citizen against citizen to keep the adrenaline up. The most common and most paranoid narrative being peddled is that immigrants are a threat, whites are under assault, women's rights are not important, and education is corrupting your children. The nostalgic ideal is the 1950s; never mind the whites only fountains, the gay suicides, or the Appalachian poverty.

Back to a story that has a happy ending. At the protest my student helped to organize last spring, over 100 students and faculty stared down 9 scraggly disaffected, allegedly armed neo-confederates who waved their flags, squeaked out a musically-challenged rendition of "Dixie," and mostly looked confused. UT and KPD officers, there to defend people who had gathered peacefully to protest police brutality, formed a human shield when the neo-cons marched up across the street. As one particularly burly, older cop said, "I want to make sure they see me first." He stayed out there all afternoon. The kids and the cops talked and showed each other respect in a way that was itself an education and an act of healing. That same officer also assured the students that he had lived in Knoxville a long time and that "if this were 40 years ago, the numbers would be reversed." I'm sure he's right, and I appreciate this guy and his fellow officers like crazy. I also want to set the bar higher than just better than 40 years ago in the south.

The Tennessee General Assembly has yet to vote on this budget, the implications of which will touch the lives of thousands of first-generation, economically vulnerable, veteran, black, brown, and white students when access to higher education is declining for the first time in generations. Our elected officials have an obligation to find ways to support, educate, and see to the flourishing all of the people in their state, even though gerrymandering has left some groups less visible and less enfranchised. Hamilton says it well: Are we a nation of states? What's the state of our nation? Well, if you've got skin in the game, you stay in the game. I, for one, am not throwing away my shot. America, you great unfinished symphony.