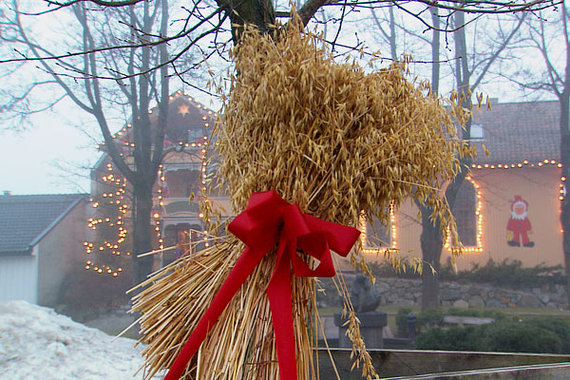 As I'm reflecting on the making of my Rick Steves' European Christmas television special, CD, and companion book, I wanted to share this book excerpt, which outlines how much of our contemporary notion of celebrating Christmas actually has prehistoric and pagan roots:

For as long as people have shivered in the winter, they've celebrated the beginning of its end. For ancient people of Europe, midwinter was known as the Yuletide, meaning the "turning of the sun."

Imagine you're living in the cold of northern Europe before the birth of Christ. Your gods are the mysterious forces of nature: the sun, rain, and wind. In summer, it's warm, plants grow, and food is plentiful. Then it gets cold and dark, and the earth becomes frozen and bleak.

Just when everything looks darkest -- around December 21st, the winter solstice, the longest night of the year -- what do you do? You throw a party! And, slowly but surely, the cycle turns. Your sun god, who'd been weak and sick, is now on the mend, spring is coming, and once again life is returning to your world.

For the prehistoric people of Europe, late December -- though dreary and dark -- was the perfect time to celebrate. Why? Because they had fresh meat and good grog to celebrate with: In December, villagers often slaughtered the cattle they couldn't afford to feed through the winter, so this was the only time of year when many of them had fresh meat. Also, wine and beer made earlier in the year had finally fermented and were ready to drink. Time to party!

The pagan Romans conquered the pagan Celtic people around 50 B.C. The Romans called their solstice festival Saturnalia, and it was marked by feasting and good-natured goofiness. Then, as Christianity slowly spread through Rome -- becoming the empire's chief religion by the fourth century A.D . -- the midwinter celebration got a new twist.

In the first few centuries of Christianity, Easter was the primary holiday -- Jesus' birthday wasn't even celebrated. The Bible doesn't say exactly when Jesus was born, and what it does say -- that "shepherds were herding their flocks" -- suggests spring rather than winter. But in the year 350, Pope Julius I decided to make the birth of Jesus a holiday, choosing December 25th.
Politically, it was a clever choice, because the young religion (legal for less than a century) could then adopt and absorb the traditions of the immensely popular Saturnalia. The fun-loving spirit of the pagan festival dovetailed nicely with the joyous welcome given to the Christ child. By the mid-fifth century, the Feast of the Nativity -- as Christmas was first called -- was celebrated from Egypt to England.

By the Middle Ages, Christianity had largely replaced pagan religions. But the hedonistic partying of pre-Christian religions was inextricably woven into Christian celebrations. On Christmas, believers attended church, and then got wild and crazy.

Though church leaders would have preferred to celebrate with more reverence than revelry, pagan customs survived: People still sang in roving bands, shared bowls of wassail (spiced wine), performed farcical plays, and exchanged gifts at New Year. Most medieval lords provided a Christmas feast for their tenants and made the 12 days of Christmas a holiday from work, so for many people, Christmas was as much about feeding the body as feeding the soul. From these festive rituals -- long celebrated around the winter Christian holy days -- many sacred observances emerged that are still beloved by the faithful as integral parts of their Christmas celebrations.