In a galvanizing, hair-raising performance, the Boston Symphony Orchestra arrived at Carnegie Hall on Wednesday night a hundred strong and with a vengeance that could only be befitting of one character and the opera that was named for her: Richard Strauss' Elektra. 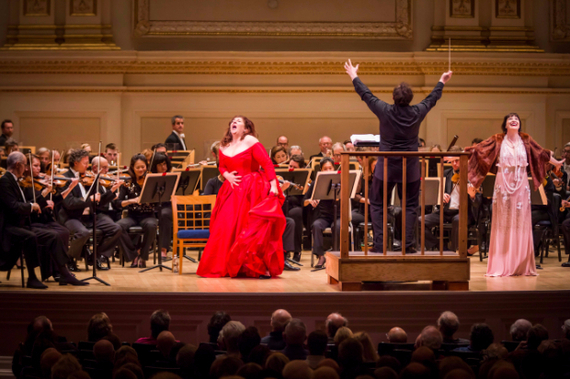 The libretto by Hugo von Hofmannstahl, the first one of his many successful collaborations with Strauss, is an adaptation of Sophocles's play of the same name. To avenge the sacrifice of her daughter Iphegenia, the queen Klytamnestra has murdered her husband, the king Agamemnon, with the help of her lover Aegisth. Klytamnestra has three other children from her marriage to Agamemnon: Elektra, who is fiercely loyal to her father's memory and vehemently hates her mother, Chrysothemis, who longs for peace and domesticity and has remained in the good graces of Klytamnestra and Aegisth, and Orest, a son despised by Klytamnestra and allied with Elektra who is believed to have been dead. The opera is set in the courtyard of the palace in Mycenae where Elektra lives, having rejected her life as a princess. The series of interactions between Elektra has her brother, sister, and mother, that make up the opera all lead up to the opera's thrilling climax: Elektra's manic dance of joy and death once Orest has slain their mother.

A cornerstone of the dramatic soprano repertoire, Elektra is famously demanding. It utilizes the singer's entire range from piercing high notes to commanding low notes, and Elektra is onstage singing nearly the whole night. There are very few people who can do justice to the role, but fortunately we live in the age of Christine Goerke. Bringing the role with which she re-exploded onto the scene as a dramatic soprano in 2012 to New York for the first time, Goerke has made Elektra her calling card and she inhabits the part entirely. In a production performed in concert, Goerke was given a chance to interpret the part without a director's influence, and the nuances she brings to this deeply angered woman make her both more human and more terrifying. This was an Elektra who was tender at one moment and furious at the next. Goal oriented but self-conscious. Alternately skulking and striding across Cagengie Hall's stage in a striking crimson gown, her stage-animal instincts blended perfectly with the feral Elektra. Goerke's voice rose to match her characterization on every level. It easily filled the hall with her powerful, glinting soprano and idiomatic interpretation of Hofmannsthal's text. She had no trouble transitioning between registers, and only at the end of Elektra's lengthy first aria did she seem to lose some steam. Otherwise, Goerke was completely in control of the performance and will surely be seen as the definitive Elektra for this generation. And deservedly so.

As Chrysothemis, Gun-Brit Barkmin lent her beautiful yet powerful voice to the part of Elektra's long-suffering sister. Her singing was sensitive when she dreamed of motherhood and powerful when she rose to match Goerke at the end of their scene. Barkmin's aesthetic exudes old Hollywood and she was equally expressive onstage as Goerke, glamorously decked out in a fur coat and ropes of pearls. She was every inch a princess nearing the end of her resources.

Klytamnestra is a role many singers grow into. It's a rich character role with fifteen minutes of thrilling music. Jane Henschel, while not emerging as many Klytamnestras do in stage productions with an entourage and weighed down with jewelry and amulets, gave an incisive dignity to the tortured queen and alternated pin-pointedly accurate singing with penetrating sprechstimme, a German speak-singing technique that's rarely done or done well these days. Growing progressively more sinister in her confrontation with Elektra, this haughty Klytamnestra gave substance to the underlying tension between Elektra and her mother. As any good scene partner should do, Henschel's Klytamnestra validated Goerke's Elektra. 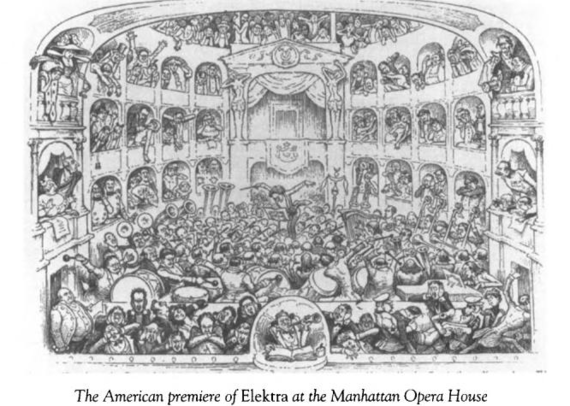 The men were uniformly good as well, though this night belonged to the women. Gerhard Siegel brought a pinging Straussian tenor to the part of Aegsith, and James Rutherford brought an expressive and soft-grained baritone to the part of Orest, though a part like Orest could benefit from a certain grittiness that Rutherford lacked. Rebecca Nash voice was pretty and powerful as the fifth maid, and Nadine Secunda was a distinguished overseer of the maids.

Part of what makes Elektra such an intense piece is the orchestra. Strauss scored over 100 instruments in the opera, and the musicians of the BSO filled the entire stage. But all of this would have been for naught had it not been for Andris Nelsons, the maestro who held it all together. This was a company that moved as one the entire night, which is a credit to Nelsons. He revealed every nuance in Strauss' complex score and never skimped on the loud, bombastic moments that make Elektra the exciting piece of music-drama that it is. The piece seemed like second nature to the musicians who delivered an unequivocally immersive performance.

Unfortunately, nights as fulfilling as this are the exception and not the norm in New York City. It will be interesting to see what Nina Stemme brings to the part at the Met in the spring. But Carnegie Hall's Elektra represented a return to the much belabored "golden age" of opera: no-holds-barred singing, a churning orchestral accompaniment, and an audience that loved every minute of it.