This is the second of a short series highlighting the personal experiences of the U.S. diplomatic community in France in 1914. Read Part One, "A Rendez-Vous With History."

William Henry Hunt, president of Racing Club Stéphanois, bid adieu to his rugby players as they departed St. Étienne for the battlefields of northern France a century ago. He did not see most of them again as so many perished in the Great War's carnage. The esteemed president did, however, help their families and others through his leadership and position as U.S. Consul. As a result, Hunt's standing reached new heights during the war. His influence served to cement rugby's place amongst the Stéphanois.

Hunt was the rare African American consul in Europe when war broke out in 1914. Since 1844, when William Leidesdorff was appointed Vice Consul at Yerba Buena (today's San Francisco), African Americans served at consular posts overseas. Strides towards expanding their opportunities and presence were made during the McKinley, Roosevelt, and Taft presidencies. Between 1880 and 1920, there were 50 African American consuls. The majority were assigned to posts in the Global South, particularly within the French Empire. Yet, a few served in France, such as Yale-trained doctor George H. Jackson (La Rochelle 1898-1908; Cognac 1908-1914), where attitudes about race were more welcoming than other parts of Europe and the United States.

Hunt benefitted from this period of promotion. First appointed Vice Consul at Tamatave, Madagascar, in 1899, he succeeded his future father-in-law Mifflin Wistar Gibbs as U.S. Consul there in 1901. The island was remote, but Hunt developed a close personal relationship with Madagascar's then-governor, General Joseph Gallieni. This steadfast friendship deepened after Hunt was posted to France. Gallieni sent a warm welcoming post card shortly after the consul's January 1907 arrival at 5, Place de l'Hôtel de Ville in St. Étienne.

The American quickly became a pillar of Stéphanois society. He gave speeches and lectures in fluent French, and joined several clubs. He easily blended in, perhaps aided by his appearance. While labelled "colored" in Department of State records of the era, Hunt was light enough to "pass," a result of his white, black, and Native American ancestry. According to his biographer, Adele Logan Alexander, Hunt was an athletic man -- tall and good-looking -- who didn't outwardly fit into any one identifying category other than "American." 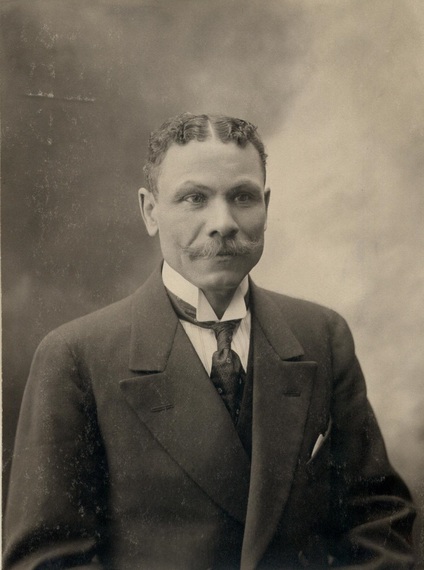 Hunt led in other ways. He became involved in Racing Club Stéphanois shortly after his arrival. The consul was a self-styled sportsman and avid horseman rumored to have taught the Malagasy Queen how to ride. This was an era that idealized "muscular Christianity," the Protestant belief that sports developed character and leadership traits as epitomized by Theodore Roosevelt. Hunt was thus very much a byproduct of the movement.

Rugby held a privileged place in France at the time. It was esteemed by the elites as a true gentleman's game and regarded as "modern" thanks to its English roots. Moreover, the sport had a strong presence in the pre-war Loire region. Thus, it made sense that Hunt grew involved. When Racing fused with another local club, Stade Forézien, in 1915, Hunt was made president of the new team, which was eventually renamed Stade Forézien Universitaire (SFU).

Hunt used his presidency to benefit the community throughout the war. On March 26, 1916, he presided over a journée sportive at the Hippodrome de Villars. The day's athletic competitions and entertainment raised much-needed funds for soldiers' families. The American helped in other ways. He visited relatives of the war's casualties and tried to ease their pain. The consul obtained information about loved ones missing in action behind enemy lines through the International Red Cross network. Accordingly, Hunt's influence and popularity amongst the Stéphanois skyrocketed.

Such measures were conducted alongside his normal consular duties. Hunt helped evacuate U.S. citizens during the war's first weeks, issued emergency consular passports, and contended with left-behind luggage. He remained in frequent contact with the U.S. Embassy in Paris, and visited several times while Gallieni was charged with the capitol's September 1914 defense. As a representative of a neutral nation, Hunt acquired responsibility for German, Austro-Hungarian, and Turkish subjects. Thus, he visited and inspected internment and prisoner-of-war camps within the St. Etienne district. Hunt also facilitated trade between U.S. manufacturers and French consumers.

After the war, the American consul used his high stature to help heal and mend the community through rugby. His standing and sponsorship drew more fans to SFU's matches, where the communal experience of cheering the team helped renew bonds. The local press noted that Hunt cemented the game into the city's social fabric through his sportsmanship, authority, kindness, and devotion.

In the spring of 1927, as Hunt's departure for his onward assignment in Guadeloupe neared, SFU held a series of going-away celebrations. The long-serving president's farewell fête was held at Brasserie Januel on Saturday, April 23. Numerous toasts extolled Hunt's virtues and recalled how he helped St. Étienne during the war's darkest hours. Many diners noted the American's success in reinforcing rugby's stature, which as one local paper wrote, would be his lasting glory. A plaque to commemorate Stade Forézin's 32 war dead was laid at Stade Geoffroy-Guichard in 1931. In some ways, perhaps it was also testament to the efforts and influence of one American consul during and after the war.

To learn more, we invite you to read "Views From the Embassy" and visit U.S. Embassy Paris' World War One Centenary page.