Will the downing of the Russian fighter jet by the Turkish armed forces over Turkey's war-torn border with Syria on 24 November go down in history as the 'Franz Ferdinand moment' of our century? Could it trigger a chain of events culminating in the next big confrontation between great powers? The short answer is no: despite the severity of the crisis (this is the first time a NATO member has shot down a Russian war plane in over fifty years) none of the actors involved have an interest in escalating military tensions. 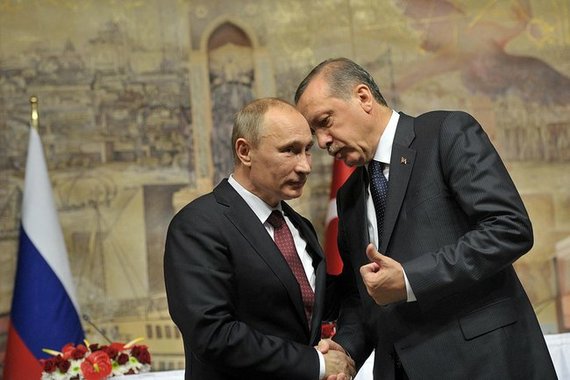 Yet those tensions do not seem to be going away either. Russia's President Vladimir Putin has already stepped up the political war by calling Turkey's Islamist government "an accomplice of terrorists", accusing it of supporting jihadist groups in Syria, buying oil from ISIS and driving Turkey towards the path of radical Islam. He has also turned down Turkish President Recep Tayyip Erdoğan's request to meet in Paris, where world heads of state have gathered for the UN Climate Change Conference.

Russian officials have announced they are suspending military cooperation with Ankara and cancelling visa free travel for Turkish citizens. Moscow has advised its own citizens - millions of whom visit Turkey's Mediterranean coast every year - to stay away from the country, raided a number of Turkish firms and sent back imports, hinted at halting joint energy and infrastructure projects, and even submitted a draft law to the Duma that would criminalize the denial of the 1915 genocide of Armenians by the Ottoman Empire; a charge that Turkey officially rejects.

Meanwhile, President Erdoğan has ruled out any apology for what his government insists was a legitimate reaction to the alleged violation of its airspace by a foreign warplane. This is the official Turkish justification for its role in the crisis. The underlying motive, however, is Ankara's frustration with Russia's recent military operations in Syria, officially against ISIS, but in fact targeting a wide range of groups fighting the regime of Bashar al-Assad, including those supported by Turkey and the US.

Nationalist sentiments have been swelling among Turks on the back of pro-government media reporting of alleged Russian atrocities against the Turkmen community of northwest Syria, which has ethnic and historical ties to Turkey. (Moscow claims it is targeting jihadists fighting alongside ISIS or the al-Qaeda affiliated al-Nusra Front, Ankara argues that these are civilians defending themselves against the Syrian regime). It was in this mountainous area that the Russian plane was shot down. As costly as his action might prove, by standing up to Putin, Erdoğan has already reinforced his cult status among his religious-nationalist supporters.

Some of this might be posturing, but the Turkish and Russian leaders' excessive pride and hubris stand in the way of containing the damage to bilateral ties, which have been flourishing in recent years. Two macho men with autocratic ways and oversized egos, Erdoğan and Putin see themselves as the heirs to the defunct Ottoman and Russian empires, driven by a sense of mission to restore their nations' past imperial glory.

Throughout their troubled history, those empires saw periods of peace broken by frequent wars. Between the 18th and the early 20th centuries, long and often unsuccessful defensive campaigns against Russia drained the Ottoman resources and precipitated its collapse. The only major Turkish victory came in the Crimean War of 1853 - 1856, when Britain and France formed an alliance with the so-called 'Sick Man of Europe' to halt Russia's imperialist expansion under Tsar Nicholas I.

In a similar vein, Erdoğan appealed to Turkey's western allies after the shooting of the Russian jet. Yet despite official statements of solidarity, NATO countries appear confused and divided. While some in Washington and London may have quietly grinned at watching Putin finally get his nose bloodied, no one is eager to see the Syrian war do what the Cold War couldn't: starting a direct conflict between NATO and Russia. In continental Europe, there is growing support for Putin's Syria policy in the wake of the Paris attacks, and little trust or sympathy for the ruling Islamists in Ankara - even though the same Europeans are also courting Erdoğan's increasingly authoritarian government to stem the flow of refugees into the continent.

Meanwhile, there is no new sign of restraint in Russia's military operations in Syria. Having recently secured support from French President François Hollande, Putin's fist can now fall harder upon the enemies of Bashar al-Assad, including the Turkmens. His benevolent hand is likely to reach out to the Kurds who are locked in a three-decade conflict with the Turkish state, while carving out an autonomous region in northern Syria and fighting ISIS with the support of the US. How far Erdoğan dares to challenge Putin and what course of action the US takes in response (if any) remain an enigma.

All these new knots and twists bode ill for the future of the world's already most violent and contagious conflict, which has reached a new level of complexity with the Russo-Turkish crisis. In a sense, the Syrian war has already gone global. The world may yet be far away from a conflagration like the one that engulfed it a century ago, but the direction it is steadily moving is far from reassuring.