The Rust Belt landscape shoves you. If a suburb in Florida serves to take the edge off, Cleveland cuts you into corners. And depending on your poison, this can be a good thing, especially if you are an artist. 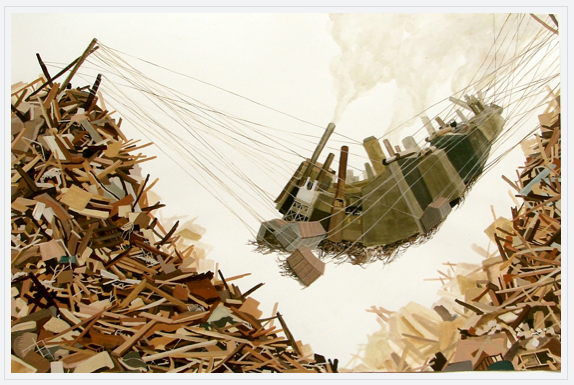 Take Cleveland painter Amy Casey. Much of her work is fueled by structural vulnerability, particularly related to the amount of vacancy that gives Cleveland its surreal yet still-present look. Houses strung together by rope. Industrial scenes uprooted. It's obvious her outside comes through her. Speaking to San Francisco Chronicle, Casey states:

It's not too uncommon to find people here who sort of love the broken-down industrial history of the area. It's very bittersweet, which may be a Midwestern thing. There are people here transforming leftover remnants -- old manufacturing commercial buildings into studios and apartments and other interesting projects. It's a pretty slow process, though I find a great deal of inspiration from the landscape. 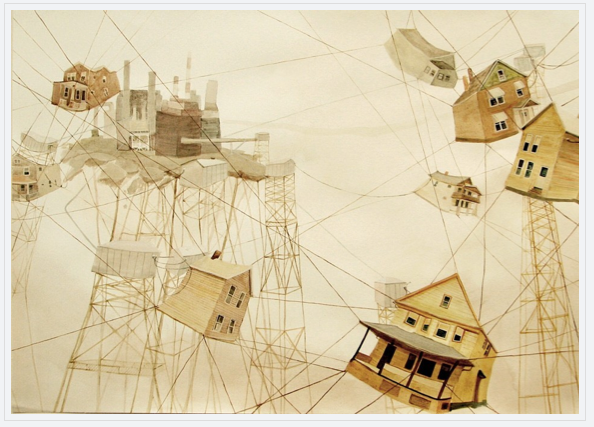 From Bukowski's skid-rowed L.A. to artists squatting in Berlin, the ability to create has long been tied to one's surroundings. Grit is in. And that's what made the Taxi Driver New York so special, or that New York of Warhol's warehouse, for it didn't bleed the imagination out of you as it got it flowing. But that New York is dying: the mass marketing, the Park Slope moms whining about the ice cream carts -- the spread of the everyday is squeezing New York's art scene into its diminishing edges, and the Rust Belt stands to be the beneficiary.

For instance, at New York's Cooper Union, the legendary Patti Smith was asked about the current environment for young artists in New York. Her response was blunt:

New York has closed itself off to the young and the struggling. But there are other cities. Detroit. Poughkeepsie. New York City has been taken away from you. So my advice is: Find a new city.

Many artists are listening. For instance, in Cleveland, Seth Beattie of the Community Partnership for Arts and Culture (CPAC) shared his anecdotal experiences with in-migrating artists:

I think the response [of arriving artists] would amaze people... We've had artists relocate from Brooklyn, Nova Scotia, even New Zealand. When you ask this group of people why they're interested in Cleveland, nine times out of 10, it's not an employment opportunity... it's a relatively high quality of life at a relatively low cost of living, opposite a growing arts community.

About that growing arts community -- it isn't simply about cheap space. It's also about the mythical geography that is rust belt chic: the widespread yet often beautiful abandonment, the wear and unevenness of the sidewalks and bridges, or more generally, the untidy ambiguity that comes with a rusty transition. Of course it's all the result of a system breaking-but that breakage can be downright liberating. Because when you're living in Cleveland or Detroit you're forced to accept that shit happens, and with that comes a freedom to creatively make sense of what's happening. That's art in a nutshell: the burning to make meaning out of failed plans and ruin. Said Parisian mystic Simone Weil:

Art is the symbol of the two noblest human efforts: to construct and to refrain from destruction.

Now contrast this with Park Slope New York: there's less urge to re-create what is perceived as being kosher. Call it complacency. Call it uncreative non-destruction. What you can't call it is edge. This isn't to say there's no edge in New York. But it's increasingly managed, fostered like a mom gelling her 3-year-old son's mohawk. For instance, in the article "City fathers scramble to keep mini-Patti Smiths from choosing...Detroit?" grit is being massaged from high-level meetings in an advertising agency. From Capital New York:

Industry and government agencies -- the sorts of institutions that Patti Smith and company were, years ago, busy subverting -- are now studying the lives of all the mini-Patti Smiths of New York today, and trying to figure out how to make them stay...

The underlying premise of the panel was that if art no longer acted as this benign bacteria on the organism of New York real-estate, it would have to be made in vitro and injected.

Contrast this with the "benign bacteria" on the un-real estate scene in Detroit. It's a landscape serving to give a fork-in-the-eye shock to convention, which can urge folks to paint, create, spill words, or -- in the case of Hygienic Dress League -- set up fake board room meetings amidst the backdrop of hulking capitalistic failure. Indeed, a case of art bred by the what-the-fuck around you. 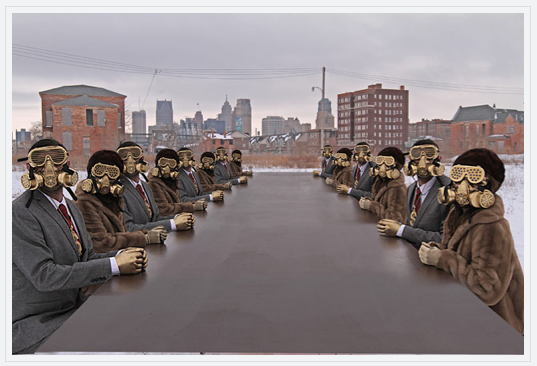