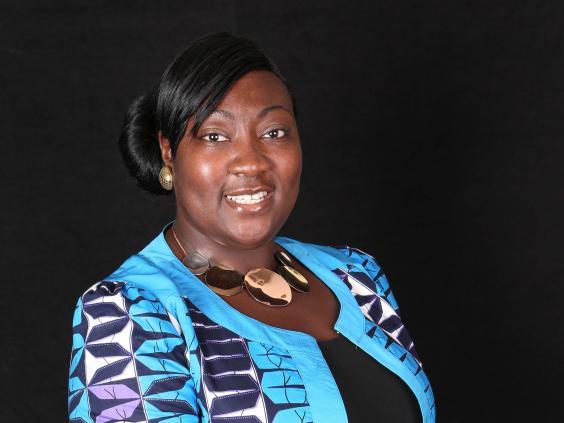 As Australia begins to make moves towards an attempt legalize same-sex marriage, it appears to stand alone as one of the last English-speaking majority nations in the World to be dragging its heels on extending marriage rights to its LGBT citizens.

With Canada leading the way in 2005, the rest of the Commonwealth (and the World) seemed sluggish in catching up, with the year 2015 being a landmark year for LGBT marriage movements around the globe. At a glance, it seems like Britain and its former colonies have only suddenly come a long way in the past decade and that Australia is now lingering all alone in its anti-same-sex marriage closet.

As a former temporary resident of Australia, it certainly feels that a majority of Australian citizens would be in favor of extending marriage rights to their LGBT countrymen and women but it might also be observed that outside of Australia's ever shifting political power focuses, an underlying culture of Australian machoism has thrived, rendering a plebiscite victory for marriage equality far from a foregone conclusion.

During ten months spent there, I discovered that I could walk around hand-in-hand with the man I was dating without any incident, but after dark, events could very easily take a turn for the combative and dedicated LGBT spaces would become the safest and less stressful option for LGBT bodies to socialize.

Unfortunately -- at a time where India currently struggles to even legalize same-sex activity -- and excepting Britain, Canada, Australia, New Zealand and arguably South Africa, the rest of the Commonwealth appear to persist, often to the extreme, in abnegation of a lot of basic rights to their LGBT citizens.

In the UK, in early January of this year, Phyll Opoku-Gyimah -- a UK-based LGBT activist best known for founding UK Black Pride -- was one of 1,200 notables listed in the Queens New Year's Honors List.

Inclusion on the list, which singles out artists, activists and individuals that are doing exceptional work in the United Kingdom, comes with the title of MBE, or Member of the British Empire.

In reaction to the honor, Opoku-Gyimah told the UK.'s Diva magazine:

If you're a member of a minority -- or multiple minorities -- it's important to be visible as a role model for others [and] for your successes to be seen. An honor is a very public statement that the establishment has decided that you, and what you do, are valued by the wider society. You've worked hard, and they've actually noticed.

However, accepting the honor wasn't quite a clear cut issue for Opoku-Gyimah, who further explained:

I don't believe in empire. I don't believe in, and actively resist, colonialism and its toxic and enduring legacy in the Commonwealth, where -- among many other injustices - LGBTQI people are still being persecuted, tortured and even killed because of sodomy laws, including in Ghana, where I am from, that were put in place by British imperialists. I'm honored and grateful, but I have to say no thank you.

The plainest way to further underline these points would be to visualize the compartmental influence of the British Empire on the terms that Opuku-Gyimah mentions.

The Commonwealth of the United Kingdom is made up of 53 member states comprised of 71 former or current colonial regions of the British Empire, wherein colonial-era laws were enforced by the British government.

To this day, these laws continue to actively and adversely affect the lives of LGBT citizens.

The below visualization does not distinguish between former and current colonies and protectorates (for example, Northern Ireland is a part of the UK and Australia is not but both are included as individual incidences in the data).

Island territories, such as The Cook Islands and Jersey, are also included as individual data points. 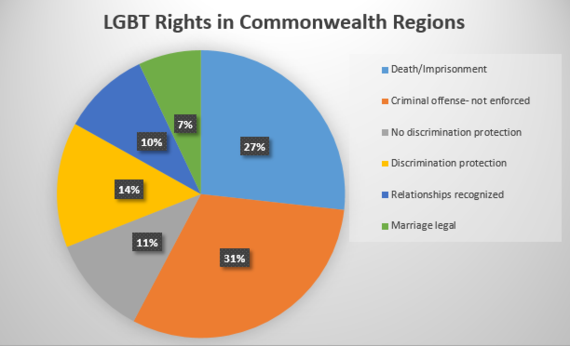 In percentages, 58 percent of Commonwealth regions (including UK territories) support laws where homosexual activity is criminalized, with 27 percent punishable by death or imprisonment, and Brunei and Southern Nigeria being the only two regions that carry a death penalty for same-sex activity.

A further 35 percent of Commonwealth regions purport to uphold laws that point to somewhat toxic social climates for their LGBT citizens, namely where there are limited LGBT protections in employment or in acquiring goods and services, as well as in availing of legal recognition for their domestic partnerships.

7 percent of the Commonwealth (Britain, Canada, New Zealand, South Africa, as well as the Pitcairn Islands, which is the last British-governed territory in the Pacific Isles) can boast something close to full legal protections for their LGBT populations that extend as far as same-sex marriage.

So in essence, we're looking at 93 percent of an Empire that is still struggling to come of from under the damaging legacy of British colonialism, which illustrates the veracity of Opoku-Gyimah's reasoning in rejecting the MBE accolade as a somewhat poorly thought out honor, on her own all-inclusive LGBT terms.

Looking at this data on a member state-by-member state basis paints an even more shocking portrait of the legacy of the British Empire.

It outlines that a frightening 75 percent of Commonwealth member states are still in a somewhat extreme stasis where same-sex activity is still a criminal offence, and that a vast minority -- mainly the more westernized states -- have adopted legal provisions of any sort for their LGBT citizens.

According to John Fingleton of the Kaleidoscope Trust, the changes for LGBT people living in Commonwealth member states have merely been incremental, with Mozambique having recently revised its colonial era penal code to legalize same-sex intimacy, and Malta having introduced a law that establishes rights for transgender and intersex people.

In Kaleidoscope's Speaking Out 2015 report, which included testimonies from LGBT people in almost every Commonwealth country that reveal pervasive and debilitating discrimination and violence, a trans activist in Papua New Guinea named Elizabeth Taylor stated:

Stigma, discrimination, abuse and violence are part of my daily life. It is not safe for me to walk around freely in my own country. My voice has not been heard when fronted up at the police station. I am not utilising my rights as a human because I am in fear.

It seems indeed like it's been a tough legacy to outlive for LGBT people in these locations, regardless of any possible developmental, economic or political factors. It can be argued that cultural facets of homophobia may have been built up around archaic colonial systems of interconnected legal, social and religious oppression.

As previously stated, Australia languishes glaringly behind the rest of the Western world regarding LGBT rights, including its close neighbor and fellow Commonwealth member, New Zealand, which -- somewhat beautifully -- legalized same-sex marriage in 2013.

Closer to Britain, Cyprus has long been known to be one of the least progressive European countries in terms of LGBT rights and has only gained the right to LGBT civil unions since December 2015. Recent progress may be due to the fact that since Cyprus began to seek membership to the European Union it has been urged to change its laws regarding sexual orientation and gender identity, as well as with other human rights areas.

It is noteworthy that despite gaining independence from Britain in 1960, it took until 1993 for any legal challenges to arise against British colonial-era law regarding LGBT rights in Cyprus, and these challenges were actually made through the European Court of Human Rights.

It was only in January 2014, in Northern Cyprus, Turkish Cypriot deputies passed an amendment repealing a colonial-era law that punished homosexual acts with up to five years in prison.

Notably, the website 76 Crimes has been tireless in documenting human rights abuses against LGBT people in countries with both colonial and neo-colonial histories through looking at individual stories and using social media in an attempt to both engage and build visibility on how LGBT lives are affected around the World.

Imaginably these are stories that Opoku-Gyimah seeks to draw attention to, by extension of her refusal to garner individual plaudits and tokens of exceptionalism from the British Empire, in favor of highlighting where we truly are as an international community and what still needs to be done for grassroots LGBT rights everywhere.