Mostly, I played outside with other kids from my neighborhood -- it's what we did in the early '80s.

Yes, there was a small group of kids who were the children of some teachers my mom taught with, and we would play in our sunny backyard in the summer, when our moms weren't working -- but generally, I played with other kids in my neighborhood.

I don't live in a neighborhood now. Instead, I live up on a hill on a couple of acres, in a semi-rural setting. Yet even if I did live in a house next to others like it, not much would be different.

My friends who live in subdivisions have the same "problem" I do: We have to create "playdates" in order for our kids to have any friends.

It's unfair, really; it's unfair to all involved.

My child has relatively few friends compared to my own little childhood gang, because back then, if our parents were friends, that was a perk rather than a necessary component to my getting to play with other kids my age.

Yet society -- and, in particular, mommyhood -- has comfortably moved entirely away from hanging-out-with-the-kid-down-the-street, to this playdate mentality, where we need to invite people with other children over for a short span of hours.

We are supposed to then engage in slightly awkward small talk while our children interact. Afterward, we part and go back home, across town or to different towns.

The best parts of playing outside as a kid were those times when the sun would dip down and the sky would begin to get dark. Hide-and-go-seek was much more fun then, as was just about any game, because it was that perfect evening light and it always cooled down just a touch.

In the winter, in Ohio at least, the snow would at times be furious, and my friend across the street would come over to cozily play dolls upstairs on the softly carpeted balcony outside of my bedroom. She, my twin sister and I were the best of friends; all these years later, we're still close. And I only remember our moms spending a handful of moments together.

I'm not saying that there's anything wrong with our "playdate society," or that I expect things to go backward and be different -- I know that they can't. 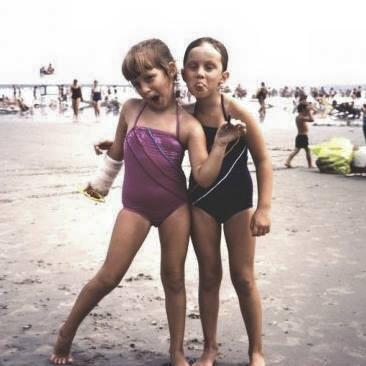 Regardless, I do feel sorry for my daughter, that she's missing out on close-knit friends -- and I feel bad because it feels like my fault.

She doesn't have friends because I don't -- this is how modern motherhood feels.

She doesn't have other little girls she's known since she was 4, because of me.

Yet my own longterm friendships were all built around us being neighbors and playing together -- not because we had to at our scheduled time, but because we wanted to. And that's the saddest thing of all.

We no longer live in a world where we send our kids out on bikes, with curfews of "before dark." Whether we like it or not, the world seems noticeably scarier than it was in the '80s.

To be fair, it wasn't perfect then, either -- but many innovations, including the Internet, have led to a culture where we simply know more about things like crime, about what's going on in the world, outside of our (unlocked) front doors. Unlike neon colors and androgynous pantsuits, the '80s aren't coming back; "playdates" are likely here to stay.

Still, looking at my daughter as she plays with her baby sister and reads to her dolls, I can't help feeling a pang of remorse when, for the umpteenth time, my baby's naptime doesn't mesh with another mother's, or I pick up my kid from school at this time, when she's free, and, finally, we just altogether give up trying to "play."

I miss having what I've never personally had: a group of children running around my backyard, with another mom somewhere in her own house looking out at them. Every time I question whether it's my living up on a quiet hill that has caused this, I speak with other moms who have neighbors a lemonade cup's throw away, but are still going on "playdates."

Yes, we all know people who live in that one, quaint American neighborhood, who still leave their doors unlocked and let their kids ride bikes down the street to so-and-so's house. But, for the most part, this is not what our kids' childhoods look like anymore.

Instead, we have ongoing discussions about things like, Is wine appropriate for mothers on playdates? Can you come over while the baby naps? I only have from 2 to 4 on Tuesday, or after 10 on Wednesday, but before I take so-and-so to such-and-such.

The world is different from how it was when I was small. My children's early lives are vastly different, too.

For the most part, I'm OK with that, but sometimes I'm not, and when I think about that one little gleaming seed of truth at the heart of why, it's often because I don't think it's "fair" that I have to be a popular playdate mom in order for my kid to have some friends.

But I'll keep on trying.

I'll keep trying to meet other people with kids of similar ages.

I'll keep uncomfortably putting myself out there to people I otherwise wouldn't. I'll keep wishing, also, in my mommy-heart of hearts, that my social butterfly of a daughter had more room to fly. But in addition, I'll store away for later the reality that, yes, her childhood in a snapshot is totally unlike my Polaroids -- but she doesn't know any different.

I'm comparing what I had to what she'll probably never have, and so she doesn't even miss it. As it turns out, that's the saddest thing of all.