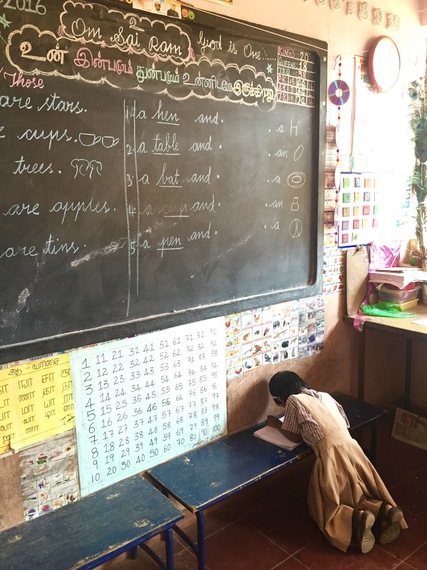 In the kindergarten classroom at the Kuyilapalayam Higher Secondary School the children are learning to write in Tamil, English and Hindi. Today on the board, Tamil letters dominate and the children practice in composition books. They come up one by one to the teacher and make the corrections she asks for.

Tamil has over 200 letters in the alphabet. The teacher tells me, "It's not like English, 26 letters only."

In the classroom where students are working on English, my eleven-year-old is shocked. "These kindergartners have better handwriting than I do. They could teach me." The alphabet is on the board in cursive. There's no printing-first philosophy here.

Here in Pondicherry, small-town India, the surf instructor speaks four languages, shifting between French and English for clients and Spanish and Tamil with his fellow teachers. Mr. Sircar, who allowed me to visit his class at the ashram, speaks English, French, Bengali, Italian, and possibly another language. Our landlord who tells us how terrible his actually very good English is, speaks French, Tamil, and Vietnamese. My advisor speaks French, English, and Tamil. All the students at the College of Education learn English, Tamil and a third language.

All I have is English. I tell the teachers I wish I had another language, that I wish my children could have learned a language in primary school, like the children in India do. "But your accent is perfect," says one teacher. My American ummms, likes, and tendency toward hyperbole seem far from perfection to me.

The phrase "mother tongue" comes up often in discussions of education in India. It's the language that carried a person through babyhood, and it's important. People talk passionately about their mother tongue, visceral, in the body. I don't see that connection with English among English speakers in the US. In fact, I've heard more regret over whatever ancestral language was lost. It would be difficult to use the phrase "mother tongue" in the US without sounding ironic. Our country's history (and continued policy) of linguistic genocide casts too long of a shadow. We could be offering Indigenous languages in early grades beside a second foreign language and using English as the medium of instruction. It's possible. Other countries do it.

Our educational focus on one language hasn't helped anyone get along either. It's clear reading the daily news that we don't understand each other. I'm beginning to believe the opposite. The more languages each of us speak, the more likely we are to find connection and commonality. When we don't offer students in the United States second and third languages in primary school, we limit them. Waiting until middle school, brains awash in hormones and bodies soaked in self-consciousness doesn't work.

I wonder with the recent unveiling of President Obama's "Computer Science for All Initiative" if we're missing something deeper in the United States. Yes, job readiness. Yes, money. Yes, that's what shapes curriculum. Yes, we are capitalists first. Speakers of languages second. Recent calls to have coding replace foreign language in US schools hammers that fact home.

Today I'm thinking about the understanding of self and the world. Knowing another language allows a child a view into another culture, a depth of understanding allows us to navigate the distance between people in a very personal way. Whether it's being able to switch languages to help someone who needs directions or it's arriving at a deeper connection that can only be found through sharing the music and grammar of words.

And for lost connection, I'm mourning alone in my office this afternoon. Every time I come to work here, one of the College's assistants comes in to turn on the air. I've traveled from Alaska and they don't want me to be uncomfortable, so they blast it the moment arrive. For South Indians, it's not even that hot yet, so the fans aren't even on yet in other rooms.

I'm trying to adapt. Yesterday I went to have chai in the canteen. Professor Annie sat next to me and talked. The chai burned my throat and I didn't know how to ask for a silver cup to pour it back and forth to cool it. The room felt like a sauna. Partway through our conversation, Annie said, "Nicole, you're sweating! You have to go back to your room now!" She grabbed my hand and told me to go, that we'd talk another time.

Here I am writing in my office with the air conditioner on. That's what it's like with only one language. Alone, in my climate-controlled world, while my friends, kind and so adaptable, work hard to make things easier for me. That's the sadness of speaking only one language.

I'm going to shut off the air and go get some chai. I will see if I can find Annie. I'll try not to sweat so much today.

Nicole Stellon O'Donnell is a 2015-2016 Fulbright Distinguished Award in Teaching recipient and is currently researching education in India. Her book, Steam Laundry, won the 2013 Willa Award for Poetry. She teaches English at a school of incarcerated youth in Fairbanks, Alaska. More of her writing is available at her blog. The opinions in this article are her own and do not represent the views of the Fulbright Program or the US Department of State.