It is a FREE and great opportunity to meet new people while working out! Hosted by Celebrity Series of Boston, "Let's Dance/Bailemos Boston" is a fun-filled, family event encouraging individuals of all ages and dance backgrounds to join talented musicians for five consecutive nights under the city lights. The weekend began with the latin rhythms of Eguie Castrillo & His Orchestra and ended with a bang on Sunday night with Vince Giordano and the Nighthawks' swing music. "Let's Dance/Bailemos Boston" commenced each night with a public (and did I mention FREE) group dance lesson related to that night's theme. Immediately following the dance lesson, the public enjoyed the summer night dancing to live music and meeting other dance fanatics within the greater Boston area. 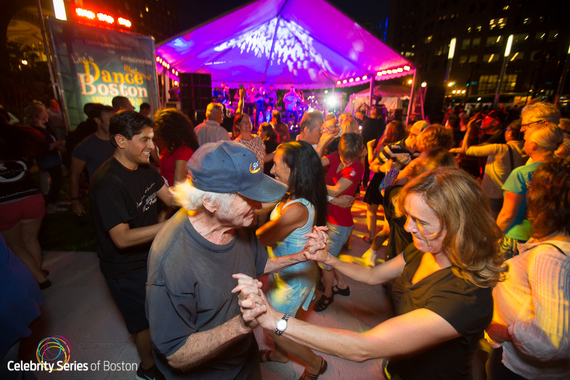 Jenna, a St. Louis native, attended various salsa night socials shortly after relocating to the greater Boston area. She met a few dancers in a company that helped her transition into a professional dance career and later take on the challenge of teaching. Similar to Jenna's background, Luis, originally from Puerto Rico and passionate about Hip Hop dance, met Jenna at a salsa night social. Soon after meeting Jenna, Luis joined a dance company and soon enough, Luis and Jenna discovered a great chemistry when performing together.

Slowly but surely, Jenna and Luis began teaching and now they instruct and perform all over Boston with hopes of starting a nationwide tour someday. Their repertoire ranges from Salsa to Bachata to even Hip Hop! Luckily, Celebrity Series of Boston got a hold of them and they were able to collaborate for a second consecutive year. In addition to this power team, Celebrity Series invited New York-based salsa orchestra, Orquesta SCC (Salsa Con Conciencia), known as salsa music with a conscience.

Interrupting the sounds of cars driving past the Greenway and people socializing on the dance floor was the sharp sound of the percussion accompanied by the trumpet. Without giving the public a chance to distinguish the sound, lead vocalist, Edwin Perez (Owner & Co-Founder) took hold of the mic and immediately transmitted his energy onto the stage. Within a matter of milliseconds, the public broke out into dance. Although two instructors stood at the front of the dance floor to lead everyone in a spicy, salsa routine, many dancers took the music into their own hands. Dancing salsa with Celebrity Series of Boston has no age limit! From an experienced couple that took the limelight with their turns and tricks to 7 year olds learning how to partner dance with Jenna and Luis, everyone enjoyed Orquesta SCC's latin rhythms inspired from Latin America but born in the Bronx, NY. 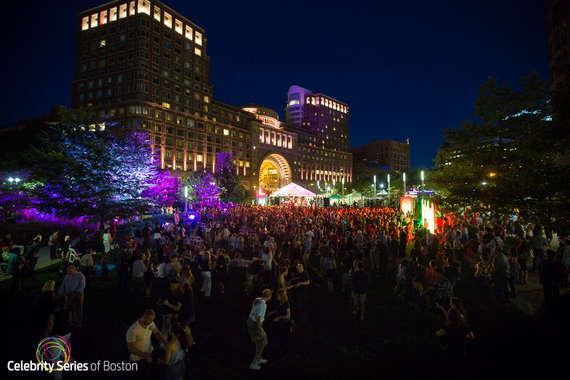 Although it was their first time in Boston with Celebrity Series of Boston, Orquesta SCC has traveled the world with their unique "sabor" (or flavor) and I assure you Boston will be seeing them again in the future. As Gary Dunning, President and Executive Director of the Celebrity Series, said, "the arts are a necessity." Thanks to the Celebrity Series team, Boston was able to enjoy yet another event promoting and exposing its residents to multicultural arts.

Be sure to check out images from Saturday night's Salsa Party and the other nights Let's Dance/Bailemos Boston here!