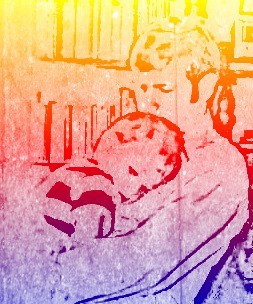 "Despite feeling totally normal about being gay, I feel weird about dancing with my mom." --Woman engaged to another woman, wondering which parent she should dance with at her wedding.

Standard wedding traditions have advantages to be sure. They give your guests something familiar to hold onto and orient them to the big event. Where are we? Oh, we're at a wedding. But the more mindful you are about the traditions you deploy, the less likely you'll be to find yourself staring at the crowd, gobsmacked, wondering what's going on. So as you plan your wedding--or any other celebration, really--break down the meaning of each tradition you choose to include, and reflect on why you're using it. This will connect you to its purpose. One of the most significant of which is to celebrate where you've come from and to pay homage to those who have contributed to the life and love that you enjoy. In many cases, that means honoring your parents.

The most popular Western tradition of this kind is the father-daughter dance. Why? Most likely due to that good ol' history of weddings as property transaction, a bride getting passed from a father to a husband. Although, the mother-son dance has almost caught up in popularity over the years. But you see, I would have liked to dance with my father at my wedding, had he been alive at the time.

The topic of same-sex parent-child dancing at weddings is never discussed--especially with two men. And on the very rare occasion that it is, our internal normative police are instantly summoned, handcuffing us in discomfort, confusion, and fear at the thought of this unprecedented proposition--I've never heard of that.

I once asked my friends X and her wife M, if either would have considered doing a mother-daughter dance at their reception. (They chose to dance with a father and a brother respectively.) They both winced, as if smelling something foul or getting squirted in the eye with a lemon.

X instantly said,"No. That would be sad. It would suggest that we were two old ladies who had been passed over that nobody wanted." I'd like to take a moment to reflect on her reaction. X is a fiercely intelligent, superhero advocate of LGBT rights, and has fought passionately, like a titan, for her own freedom and happiness. In other words, she is known to be incredibly self-reflective. So her statement here is notably out of character. I mean, why would the absence of a man in a parent-child dance indicate either bride was "passed over" and not "wanted"? The whole premise of their wedding was that she and M wanted and had chosen each other. But this shows just how strong a headlock the gender binary/heteronormativity holds on us all, especially regarding parent-child narratives. Even the smartest, most passionate, and insightful among us are easily possessed by such narratives, like a deep sleep from which we are cursed to never wake up.

M's response was also delivered from the clutches of fear, though less reactive, and more reflective. She said:

"My mother had already come a long way as far as accepting me as a lesbian, accepting our relationship, and accepting our wedding--announcing it to all her family and friends. I wanted to respect her efforts, and wouldn't have wanted to rock the boat by pulling her out into the spotlight like that. But, truthfully . . . I wouldn't have been comfortable with it either . . ."

M thought of several strong reasons to spare her mother the discomfort of a mother-daughter dance. Yet when it came to her own discomfort, she was blocked.

I'm not saying that she should have wanted to dance with her mom. But, as with every ritual we consider, it behooves us to understand all the options and our own feelings about them.This way we avoid saying yay or nay to anything based on a knee-jerk reaction alone.

To be fair to X and M, their choices in this case reflect great efforts to include their families in their celebration (which I found to be absolutely wonderful) without alienating them. And I'm not even sure I would have been comfortable asking my dad to dance in reality, though I would have wanted to. I can talk a big game now, given I didn't have the option, but I likely would have felt a discomfort similar to theirs.

So what is this plaguing discomfort, and how can we get past it?

My friend Lyn--having danced with her mother (who raised her) at her bat mitzvah, but danced with her father (who did not raise her) at her wedding--says,"I think brides in particular want that father-daughter dance so we can feel, I hesitate to say . . .'normal.'" She then added,"In a . . . heterosexual way . . ."

Emphasis on "sexual. And therein lies our answer. The sexual implications of Daddy's Little Girl are considered to be so "normal" that we never even notice them. For instance, my mother's favorite memory of her father--which she frequently, indiscriminately, and proudly shares with any kind stranger who will listen--is of her having breakfast with him as a child, during which he would allow her to call him by his first name,"But only until your mother wakes up," he'd say. (Oedipal theory anyone?) By contrast, with Daddy's Little Boy, the sexual element is all we think about, immediately concerning ourselves with words like incest and pedophilia.

In other words, due to social conditioning, we consider a child's erotic/sexual fantasies about a parent to be perfectly normal if they are co-ed, but we consider them to be sick, disturbed, and problematic if the sexes are the same. (This might help us understand X's knee-jerk reaction to Mommy's Little Girl and how "sad"--sexless?--she found that idea.)

Though you won't hear too many people describe it like that. Yet. (Try Googling father-son dance. You'll get a lot of,"huh?") If this had all been broken down for me when I got married, and my dad were alive, I would have definitely elected to dance with him. I would then be confident that the implications are really no different from traditional father-daughter or mother-son dances.

There are, of course, various ways to dance with your parents, or to honor your roots at your wedding, if you so choose. But however you perform a ritual of this kind, and whoever you choose as a partner, know that it will be more significant if you are aware of its meaning and intentional in your presentation.

For example, my husband and I had very specific intent when we each danced with our moms at our wedding reception. As we swayed to Mama Cass's "Dream a Little Dream of Me," I recalled how my mother sang that song to me as a kid when she'd tuck me in at night, preparing me to dream. Her constant encouragement of my dream life was perhaps her greatest gift to me. It inspired me to try and change the world, so that I could live and love in it more openly, fully, and more freely. And I got to honor that with this dance.

*This post has been adapted from Mark O'Connell, LCSW's book, Modern Brides & Modern Grooms: A Guide to Planning Straight, Gay, and Other Nontraditional, 21st Century Weddings.

More:
weddings
Newsletter Sign Up
A weekly guide to improving all of the relationships in your life
Subscribe to HuffPost’s relationships email
Successfully Subscribed!
Realness delivered to your inbox