So, let's talk about gay marriage.

First of all, let me say that I hate to even have to call it "gay marriage," because in reality, it's just marriage. But, I am using it here for simplicity sake. Also note that I mean it as an umbrella term to cover any marriage involving LGBT folks.

I want us to have a short conversation, because I have a fear. I have a fear that since the ruling to allow same-sex marriage, something will happen (and is happening): a lot of people will get married on a whim, just because they can. 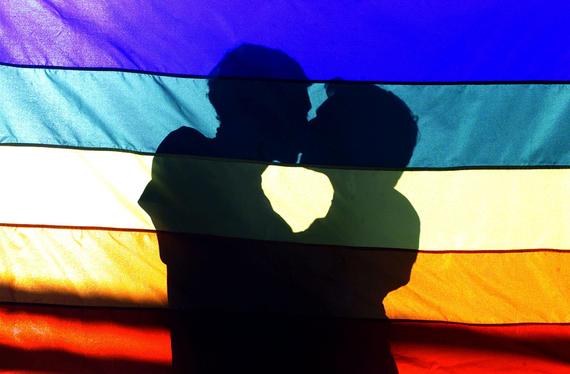 Now, don't get me wrong, if you feel like your current partner is "The One," and you've already been together for a long time, then by all means, slap a ring on that finger and go get hitched. But, I urge all of you LGBT couples to really think hard before you do so.

For years (decades even), the conservatives have cried and bemoaned the "sanctity of marriage." So much so, that that term even carries its own bad connotations. But, at the end of the day, I still believe there is a sanctity of marriage that must be respected. Even though I am gay, I still consider myself a Christian, and I still believe that marriage is a social contract, as well as a spiritual one. Now, don't get me wrong, I'm not so fundamentalist to say that once you're married, there is never any grounds for divorce, etc. However, I do think that when you take that step and form a union that we call marriage, you are forming a bond that, in a sense, is never broken, even through divorce. Marriage is not something that suddenly stops.

I am with a boyfriend now of over six months. However, prior to that, I was in a relationship for two and a half years. I sometimes still feel the effects of that break-up, and we weren't even married! I can only imagine the impact that the breakup would have had if we had taken that plunge. But, this very reason is the reason I am writing this article! If marriage were legal in our state, there's a chance that we could have gotten married at one point. I'm not saying we would have, but I see how easy it would have been to have gotten swooped in to the excitement of the new opportunity, and to have jumped up and made it official. I worry that a lot of couples are doing this across the nation. I'm worried that they are getting swept into the grandeur of the excitement, and they are taking that jump way too soon. And that scares me.

I'm not scared that they're going to ruin the "sanctity of marriage" for all of the other couples, because I don't think that's even possible. If you truly believe marriage is a sacred contract and union, then nothing can ever mess that up. It just is what it is. What I'm scared about is that they are making these decisions on a whim and not taking the time to really get to know one another first and knowing, without a shadow of a doubt, that this person is the person that they want to spend the rest of their lives with, and that they know they truly want to call this person their husband or wife.

Now, I'm an idealist, but I'm also pragmatic. I know that in the end, the divorce rate is going to be the same for LGBT couples as they are for straight, cis-gender couples. I know that this advice I'm giving to same-sex couples is advice that has been given to straight couples for over a century. But, for us, it's new advice, and it's one that I hope people have an ear to hear.

Please, don't just get married because you can!

But, please, do not just get married because you can. Respect the union, because it is a very real union that is not easily undone. Think about it. Talk about it. Pray about it. Go to pre-marital counseling. Heed the advice of those that you love. Respect what others have to say about the marriage, and don't rush it. Take the time to truly be engaged to one another, and know that since same-sex marriage is available, it's not going away. You have time to take it slow, and make sure that you know it's the right decision.

And once you have taken the time, and you know that it really is the right decision, say "I do" without any regrets!

This post was originally from Brandon's website, TheGayChristian.com. Brandon is the author of the new book, Straight-Face, which chronicles the psychological, deeply emotional, and spiritual aspects of his incredible journey from Southern Baptist minister to out-and-proud gay man. You can find Straight-Face on Amazon.