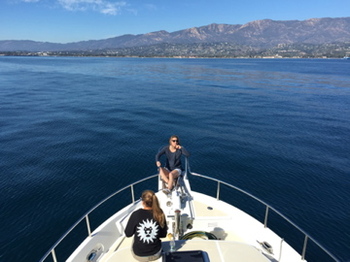 If you love films and like to wake up in the most beautiful setting imaginable, otherwise known as the "American Riviera", the Santa Barbara International Film Festival is where you should be January 27th-February 7th, atleast that is where you will find me! This year is the 30th Anniversary of the Festival, as always, set in the actual birthplace of American cinema where the heart of film in this country began beating before the industry moved a little further down the coast. Every venue, where films representing 54 countries will be seen, is seeped in film lore, whether it be silent film, Charlie Chaplin, Mary Pickford, "old Hollywood", just know there is a story there. So as we wind our way through, that is if you are coming along with me to take in the 23 World and 53 U.S. premieres, a range of genres and subject matter, panels of talented artists in the industry, Awards and Tributes, just keep remembering, this is the soil where our country's movie industry began! The Santa Barbara International Film Festival is the Reel Deal. 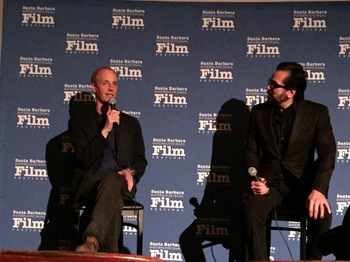 For those of us lucky enough to be a part of the Santa Barbara Cinema Society and/or to have purchased a SBIFF Platinum pass, the Kick-Off to the Festival began last Saturday at 11:00 a.m. at the Riviera Theatre with a screening of "Nightcrawler," the film written and directed by Dan Gilroy, set in Los Angeles. Mr. Gilroy is nominated for an Oscar in the original screenplay category this year for this picture. The screening was followed by a discussion led by the incomparable Roger Durling, the Executive Director of the Festival and the Cinema Society. "Nightcrawler was one of my favorite films from last year," Roger opened with. "The film made an incredible commentary about today's society. The character, Lou Bloom, (played by Jake Gyllenhaal) reminds me of Travis Bickle in 'Taxi Driver'."

In the discussion, Roger's first question to Mr. Gilroy was, "What inspired the film?" Gilroy said that he was influenced by seeing Weegee's graphic crime photos of the forties and interested about the intersection of art and commerce. He learned about "stringers," those nightcrawlers who chase sensational stories for newscasts and papers. Gilroy said that he didn't want to make a "message film" but that he did want to say something. He was nostalgic for the movies coming out of the 70's post Vietnam War when filmmakers were trying to make sense of things and speak to that. He sees that period of filmmaking as being very different from today's film environment which is "so commercially driven." "Nightcrawler" is a reaction to that.

Gilroy said originally he wanted to create a character that was a hero. "I tried many times, kept trying to plug in a hero and it didn't work," saying it is tough to write "a message" film. "I wrote it to be entertaining and engaging." Gilroy focused on a person who is struggling to have a successful business. "I did not want to judge the character. It was too reductive to have you think 'this is a psychopath'. Maybe the problem isn't Lou but the world that rewards Lou. I didn't want to make 'American Psycho.' Jake (playing the character, Lou) walks that line. What Jake is doing is a highwire act. If he goes one step he is a psychopath and the other it is a satire."

"The Lou's of the world today are winning, that is what is different. Sociopaths are often in positions of power and money. Hypercapitalism is the jungle today. The strong survive and the weak get killed. In terms of the 70's thing, I was consciously saying something. In the 70's if you didn't put out what you were saying, filmmakers would ask what are you doing? Now there is much more commercialism."

Tony Gilroy is married to Rene Russo who also stars in the film. Tony talked about her character which he wrote for the film. "Can't believe I gave her that name, 'Nina Romino'! There is an innocence to Lou, caught somewhere between autism and aspergers. Nina is desperate and works in a system reflective where all of us are needing to find jobs and keep jobs, making choices based on desperation. She needs that health insurance." When she and Lou get together "it is one bad person gets with another bad person and makes it exponentially worse." Incidentally, it was great for the audience to see Rene Russo in the film. People sitting near me in the screening were saying that afterwards. We want to see Rene in more films! She is so good in "Nightcrawler." 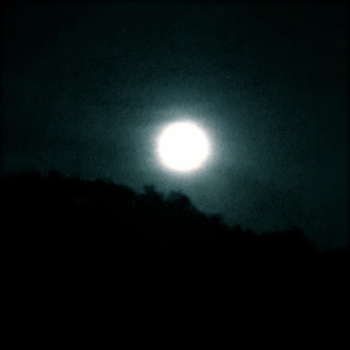 Roger asked about the cinematography. Tony talked about Robert Elswit, the cinematographer, and shooting Los Angeles with "an untamed energy to it. We were doing as much deep focus as possible." The film opens with a foreboding full moon and there are shots of coyotes in the film to further push that wildness.

Hearing from the Writer/Director of the film is always the greatest advantage. It keeps you thinking even more after watching the film about what went into making it and why the filmmaker made it.

Well, now it is time to head off to the official Opening Night Film Screening of "Desert Dancer" followed by the Gala at the Paseo Nuevo Shopping Center. I will let you know how it goes!