Late last week we learned that Personal Income rose at a respectable pace of +0.4% in March, exceeding the consensus estimate of +0.3%. As has become a recurring theme, though, the pace of consumer spending was unable to keep up with the growth in income. Personal Spending rose just +0.1% in March, below the consensus estimate of +0.2%. The net effect? The savings rate rose again, this time to a 13-month high of 5.4%. For the full first quarter of 2016, the savings rate of 5.2% matched the highest level since the fourth quarter of 2012.

We have been talking about the likelihood of a higher savings rate for several years, and we continue to believe that further increases will be a significant drag on economic growth for at least the next several years. Why? Well the quickest explanation is that leading up the financial crisis, the savings rate had fallen far too low relative to historical averages. Since World War Two, the US consumer has saved an average of 8.7% of his Disposable Personal Income (DPI) on an annual basis. That rate fell to a low of 2.6% in 2005 but has since rebounded to 5.1% in 2015 - still well below the long-term average. So the recent increases in saving may simply be that the consumer is compensating for years of profligate spending and under-saving. 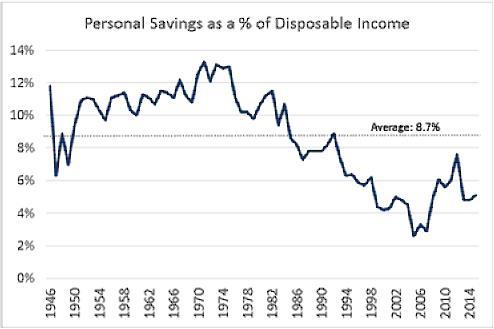 But simply showing that the savings rate is low relative to history is not a great explanation for why we think the savings rate will continue rising from here. The consumer savings rate can be affected by a number of different variables, including income levels, unemployment rates, housing prices, stock prices, inflation rates, consumer confidence, lending standards (access to credit), gas prices, interest rates, etc. Given that many of these variables have been supportive of consumer spending in recent years, most economists have been somewhat confounded by the recent increases in the savings rate. For example, the unemployment rate has been cut in half, incomes have risen, stock prices have tripled since March, 2009, the housing market has rebounded nicely, inflation is low, confidence has rebounded, lending standards have loosened, and gas prices and interest rates are very low. There is not much in these indicators that would "spook" consumers into saving more. So why the sudden urge to put more aside for a rainy day?

In our view, the most logical explanation is that many of the economic indicators cited above are not an accurate depiction of the typical middle-class family. Most notably, middle-class incomes have risen at a much slower pace than the cost of non-discretionary expenditures, such as health care, education, child care, housing, and yes, saving for retirement (the cost of which goes up as asset prices rise and expected future returns go down). The squeezing of the middle class has been a decades-long trend that shows little sign of reversing. The average American is in precarious financial condition, without the means to address a minor short-term financial emergency much less fund a 30-year retirement. The cover story in this month's The Atlantic magazine ("The Secret Shame of Middle-Class Americans", by Neal Gabler) is just the latest in a long series of news pieces that have shed light on this issue. The entire article can be found at this link: http://www.theatlantic.com/magazine/archive/2016/05/my-secret-shame/476415/.

But let me offer some quotations taken directly from the article:
Again, it has become abundantly clear that the large majority of Americans are financially prepared for neither a major crisis nor retirement. Moreover, the big increases in asset prices we've seen in recent years (stocks, real estate, bonds), combined with the very low level of interest rates, means that those underprepared Americans will have to set aside more money, not less, in order to reach their retirement and security goals. Unfortunately, this is one cost that the Fed refuses to consider in its assessment of inflation. If we can't expect to earn the historical 10%+ on stocks and something reasonable like 4%-5% on bonds, then we need to save more, especially if we have deferred the process of saving for retirement until now. Setting aside more for retirement or an emergency is a very real cost that needs to be considered. As always when I discuss this topic, I ask you to please not mistake this as a political commentary. I am simply trying to shed additional light on the problem as it relates to our future economic growth prospects. A little less than 70% of our economy is comprised of consumer spending, so the consumer's financial condition is of utmost importance. Possible solutions to the problem are outside the scope of this Market Commentary, but I'll give you a clue. Congress...get your act together!
Download
Calling all HuffPost superfans!
Sign up for membership to become a founding member and help shape HuffPost's next chapter
Join HuffPost