What do you get when you have Pierre Hermé, Massimo Bottura, Andoni Luis Aduriz, Grant Achatz, Jeffrey Steingarten, Elizabeth Falkner and Johnny Iuzzini all under the same roof? The StarChefs International Chefs Congress, one of the most intriguing culinary industry events around.

The theme of this year's ICC was "The Sixth Sense," so to hear a conversation with Grant Achatz of Chicago's Alinea about cooking with his sixth sense was a moving experience. Achatz is a cancer survivor, specifically, cancer of the tongue. During his illness, Achatz couldn't taste anything, and he spoke of how he had to rely on his sixth sense in the kitchen. For any chef to lose their sense of taste is a terrible thing, for a giant talent like Achatz, it seemed even more of a tragedy. But Achatz struggled through, cooking with his sixth sense, and eventually conquering the cancer. Today he continues to create a transcendental dining experience at Alinea. 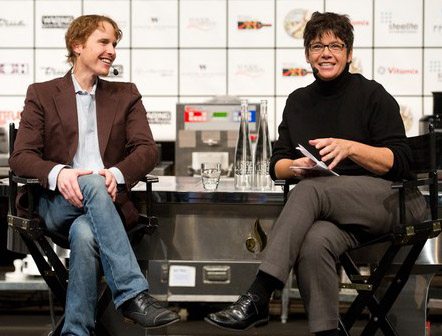 Achatz also spoke of another interpretation of the sixth sense, the way a person feels when they experience his food. He said for him it's not enough to make great food, he wants to evoke a reaction from his customers, to take them places they've never been before, to move them mentally, conceptually, even physically. He sees his work as a chef possessing the same potential to move people as does the work of a painter or musician.

For me, the most eye-opening, and entertaining, demonstration of this year's ICC was that of Andoni Luis Aduriz of Mugaritz in Errenteria, Spain. Like many globe-trotting chefs with a message, Aduriz brought a film with him about his restaurant, specifically about the sources of its ingredients. The film took us to the coast where his fishermen/women catch just for Mugaritz, into the hills surrounding Mugaritz to the shepherds, and into the valley to the farmers. To put distance into perspective, the film showed a regional map, marking the location of Mugaritz in relation to the sources of its products, demonstrating the local nature of all that Mugaritz offers its customers. 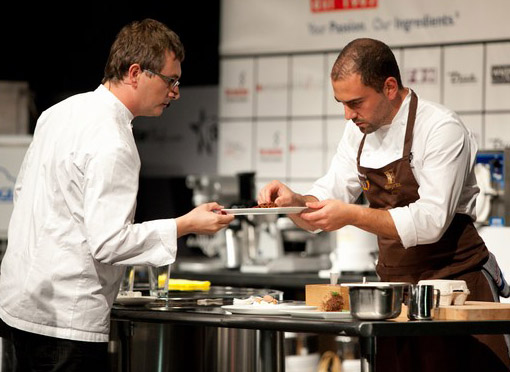 Then in films that demonstrated techniques, Aduriz showed us how to make his "Rusty Nails," his "Walnut," and a dish called "Shhh, Cat's Got Your Tongue," a composition of lamb's tongue, caramelized onions, herbs and garlic flowers. The film also demonstrated his dessert entitled "The Broken Egg, The Frozen Yolk, and The White Flowers," saying it took him four years to come up with the perfect way to make the edible egg shell. Then he pitched his "egg shells" into the audience, most of which shattered when grabbed. I managed a taste of one myself, it was a bit mind-bending how it truly had the texture and appearance of an egg shell but tasted sweet. And of course eating it wasn't at all like the unpleasant experience of accidentally biting into a bit of eggshell in an omelette! 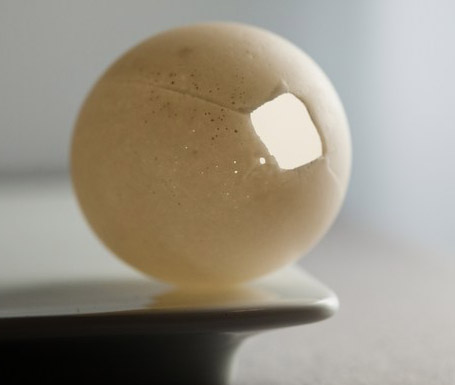 For me, it was an exceptionally special ICC because the most famous chef in Italy today, Massimo Bottura of Osteria Francescana in Modena--one town away from where my family lives in Reggio Emilia--made the journey to share a film he made on the Po River Valley. The film, entitled "Il Riturno" (Going Back), motivated Italian politicians to put millions of Euros into cleaning up the Po River and restoring the centuries-old agricultural Mecca that is the Po Valley. Appropriately, his film transported me back to the region of Emilia Romagna, to its people, landscape, and produce, and I laughed when one of the locals in the film said "You can't talk about Emilia without talking about pigs."

Bottura is a chef on a mission to take all chefs--and all people--in the direction of sustainability. Interpreting the theme of The Sixth Sense as an ethical dimension, Bottura said, "If as chefs we don't have an ethical approach to food, then we don't have an aesthetic. To be chefs in the 21st century we must be conscious of our actions and our ideas because the world is watching us." Bottura spoke of supporting small farmers, sustainable fishing, family dairy producers, and of bringing back the ways of the past so we can actually have a future. 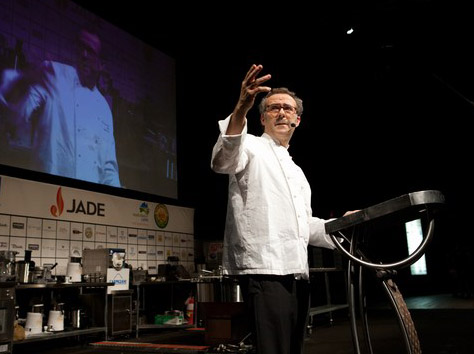 Will Blunt, Managing Editor of StarChefs.com, echoed the message of both Bottura and Aduriz, telling me, "The world is changing, and so is this industry. Now more than ever, we're examining not only our products and methods, but our motivations--and our place in the greater social community. The Sixth Sense will become the central commodity of the responsible, ambitious professional."

StarChefs ICC filled everyone with food for thought. And Antoinette Bruno, StarChefs.com Editor-in-Chief reflected on her global journey to find this year's presenters, presenters that would fit the theme of The Sixth Sense. "This year, we've seen evidence of the sixth sense all over the world, not just in temples of avant-garde cuisine, but anywhere the hospitality industry reaches deep."

Fortunately, in addition to food for thought, the ICC also fills everyone with food for the tummy too. From all of the booths offering lunch and samples throughout the day, to the evening events like the Presenters Welcome Dinner and The New York Rising Stars Gala, I tasted a world of different foods.

Among my favorites was, of course, the Prosciutto di Parma. I just couldn't pass by that booth without helping myself to a few mouthfuls of the glistening, moist cured ham. In the States it's hard to find Prosciutto di Parma that hasn't had all of the exterior fat cut away. I've complained to deli workers about doing this because the outer layer of fat is what prevents the ham from drying out. Thankfully at StarChefs ICC, that outer layer of fat remained in tact. 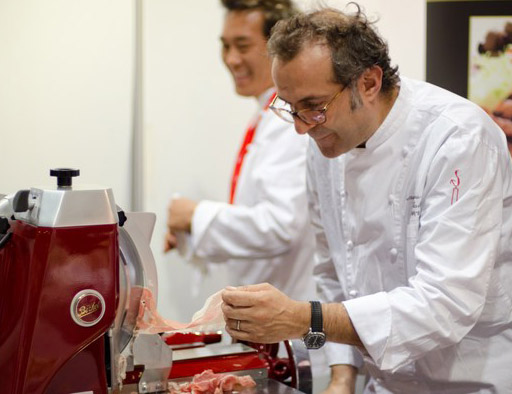 Proving itself competition for the Prosciutto di Parma was the Jamòn Ibèrico from Cinco Jotas (5J). A new-comer to the ICC's Spanish Pavilion, Cinco Jotas is widely considered the best Jamòn Ibèrico in Spain, and it's only now poised to hit the U.S. market. Made from pure-bred Ibèrico pigs who roam the pastures of Jabugo, their diet consists of wild-growing corn oaks, thyme and rosemary. The flavor and marbling were exceptional, and I suspect it won't be long before Cinco Jotas is a top selling item in high-end delis across America. It's that good. 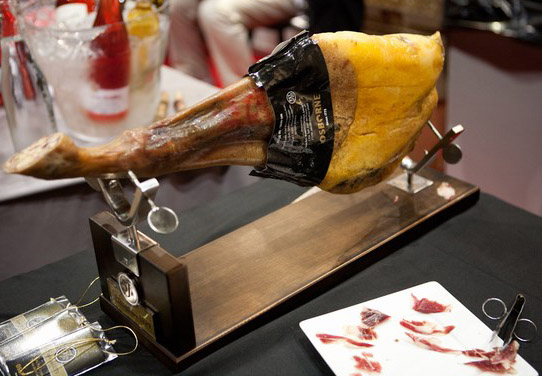 One very cool item was the Foie Gras Lollypop from Chefs Claudio Ferrer and Alex Martinez of Electrolux. I'm not sure how many of these chilled spheres of fluffy fois I actually ate, but after a little while, when I would circle back yet again, they gave me knowing look. While more simplistic and down to Earth, the perfection of the Roasted Australian Lamb with Lentils from Meat & Livestock Australia was another dish I helped myself to repeatedly. With so much cutting-edge cuisine all around, it was nice to have some comfort food that allowed top quality ingredients, rather than innovative techniques, take center stage. 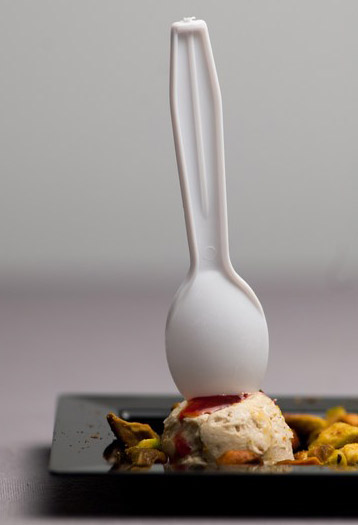 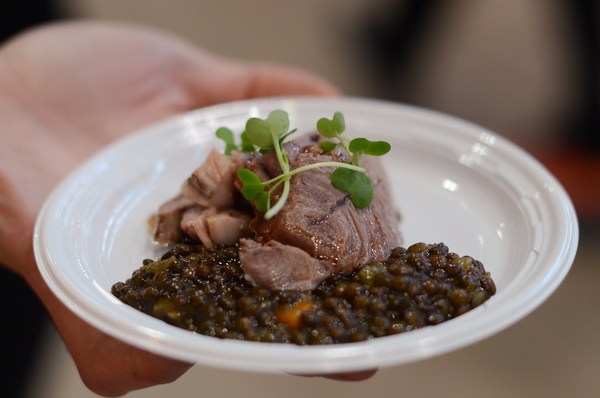 At the StarChefs ICC Presenters Welcome Dinner, my favorite dish was host chef Ken Oringer's White Orchid Root Gazpacho. Oringer, Chef-Owner of Boston's Clio and Uni Sashimi Bar, has been a familiar face at StarChefs ICC for years, and every year he manages to make dishes that are always my favorite. 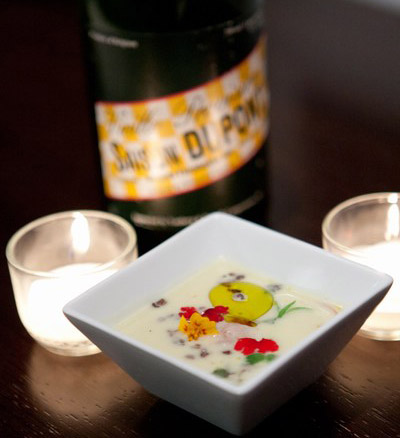 At the New York Rising Stars Gala, hosted by Chef Yuhi Fujinaga, despite the packed space, I managed to elbow my way through the crowd and taste the dishes of all the Rising Star chefs. My favorite, which also happened to be voted the favorite by the crowd, was the Octopus a la Plancha by Chef Aaron Chambers of Boulud Sud. A close second was the Peruvian Chicken, Aji Verde, Huancaina Sauce and Papas Fritas by Chef Adam Schop of Nuela. 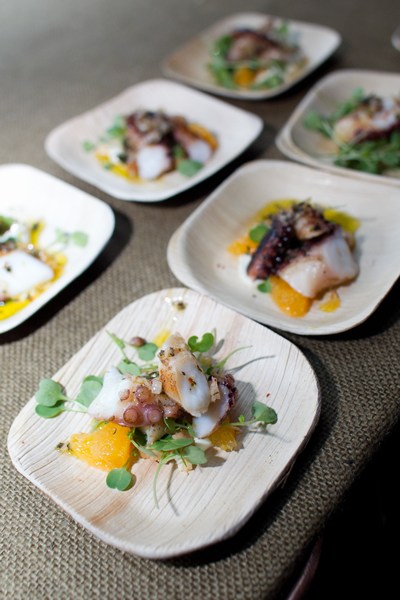 You can find the recipes of all the Rising Stars Gala dishes on StarChefs.com, just click on the chef's name and you'll see the name of their dish next to their bio.

The savory side of StarChefs International Chefs Congress made my mouth water and at times--hearing Grant Achatz speak and watching the film Il Riturno--it made my eyes water too. From start to finish, all that was the savory side of the ICC proved a moving and unforgettable experience. But, the International Chefs Congress didn't stop at this, there was a sweet side too. So I hope you saved room for dessert, because my next article will cover the sweet highlights from Pierre Hermé gracing the main stage and doing a demo on French macarons, to the Second Annual StarChefs International Pastry Competition.