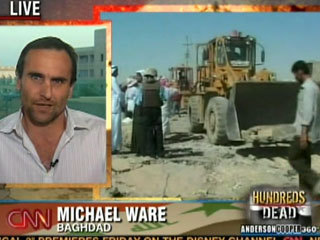 CNN's Michael Ware, formerly Time's Baghdad correspondent, rarely has good news. Not really surprising, since he's one of the few — very few — journalists who has been in Baghdad since before the U.S. invasion. His reports are often bluntly pessimistic and contradictory of the official version, and all too often, right.

Who remembers the kerfuffle over whether to call the "sectarian violence in Iraq" a "civil war?" Sounds ludicrous now, to have even questioned it; it sounded ludicrous to Ware then, too. When John McCain proclaimed that Baghdad was safe and stroll-worthy, Ware smacked him down swiftly and furiously ("I don't know what part of Neverland Senator McCain is talking about when he says we can go strolling in Baghdad"). Ditto Joe Lieberman's sunny-side-of-the-street take. Ware's the Cassandra who said WaPo's dire take on the insurgent-controlled Anbar province was way worse than written, and Ware who realized early how deadly and coordinated the insurgents were — because they were his contacts (at some points uncomfortably close as they passed him videos of their violence). That was in June 2004; in May 2005 Cheney made his infamous "the insurgency is in its last throes" comment. Alas, we know how that turned out.

And there's more: Six months later, the White House proclaimed that, hooray! Iraqis were totally ready to stand up and lead the charge! Here was Ware's balloon-popping take: "Whoever from the White House is saying [that Iraqis are ready to defend themselves] is one of two things. Clearly, they have never been in Iraq. And, clearly, they have never been in a firefight with an Iraqi unit. Secondly, they're clearly lying, whether they know it or not." The White House must love Michael Ware. (Conservatives don't; most recently, he was accused on Drudge of heckling John McCain at a press conference and being an alcoholic.) Smear tactics, we have seen, are often reserved for those who are telling the truth.

Upshot: The guy may be a pessimist, but he's unfortunately rarely wrong. So it is with trepidation that we revist Ware's comments on CNN from this past Monday night on Anderson Cooper 360. The topic? The official line that, thanks to the Surge, violence in Iraq was on the decline. This was Monday night; on Tuesday, four coordinated suicide bombs exploded in Northern Iraq, killing at least 400, with the death toll still rising. Ware was, not surprisingly, skeptical that the relative drop in violence was a sign of improvement; he saw it more as borrowing from Peter to pay Paul. See below:

MICHAEL WARE, CNN CORRESPONDENT: Well, Anderson, the surge is a part of it. Militarily, the surge is designed to deny al Qaeda and the Shia death squads the freedom of movement they once had in Baghdad.

Are they doing that? Yes, to some degree. The surge has shown some successes.

But the real success, Anderson, is coming from something totally different, and that is coming from America cutting deals with its former enemies, principally the Ba'athist insurgents, the Sunni insurgents.

What the U.S. troops are doing is giving a set of numbers, a series of data, a number of lowered attack figures that may give the military the political cover it needs in Washington. But at the end of the day by cutting these deals the seeds are being sown for a much broader more entrenched civil war that America will leave behind.

Hard to say whether Cooper expected that; he tried to steer Ware toward some good news, but to no avail:

COOPER: In terms of talking about big al Qaeda-style attacks and this number reduction, in terms of the success story, what about sectarian violence? Has this escalation of troops had an impact on that?

WARE: No, not really. It's forced it to displace. It's forced morph and to adapt as we always expected it will.

Now the number of bodies tortured, mutilated, victims of sectarian death squads that are showing up on the streets of Baghdad continue to rise and fall. Right now, there's less than there used to be, but by less that's still 20 tortured people showing up every morning.

Now the numbers are down for a number of reasons. One is two million people have fled the country. Another two million are displaced internally in refugee camps, so there's simply fewer targets. And of those who remain in the capital and in the villages surrounding, they now must live in segregated communities, heavily defended by their own militias, be they American-backed Sunni militias or Iranian-backed Shia militias. No one lives together anymore, very, very few people. This place has been ethnically cleansed and segregated.

So deaths are down because it's much harder to kill each other until the Americans withdraw and the real battle begins.

COOPER: Complicated picture. Michael Ware, we appreciate it. Thanks, Michael.

Complicated picture, indeed! Thanks, Anderson! This place has been ethnically cleansed and segregated! Standby for a report on the world's new tallest man! (I am not joking. Behold the transcript. It's at the bottom of the hour, where crazy reports from Iraq belong, apparently.) Meanwhile, one day after Ware described the shadow-boxing between the U.S. in Iran via whichever civil war faction they were respectively arming, four car bombs cause mayhem in Iraq, and the Bush administration announces that they're toying with the idea of explicitly labeling the Iranian Revolutionary Guard a foreign terrorist organization. (We're pretty sure that was one of the Iraq Study Group recommendations.) Complicated picture! Good thing we have Michael Ware over there, so we can learn more about the World's Tallest Man over here.

p.s. Nice work on the "Hundreds Dead" bug down in the right-hand corner there, CNN! Classseeeeeee.