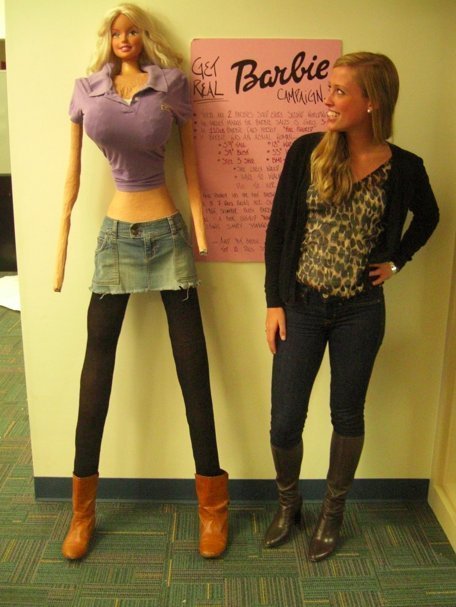 •There are two Barbie dolls sold every second in the world.
•The target market for Barbie doll sales is young girls ages 3-12 years of age.
•A girl usually has her first Barbie by age 3, and collects a total of seven dolls during her childhood.
•Over a billion dollars worth of Barbie dolls and accessories were sold in 1993, making this doll big business and one of the top 10 toys sold.
•If Barbie were an actual women, she would be 5'9" tall, have a 39" bust, an 18" waist, 33" hips and a size 3 shoe.
•Barbie calls this a "full figure" and likes her weight at 110 lbs.
•At 5'9" tall and weighing 110 lbs, Barbie would have a BMI of 16.24 and fit the weight criteria for anorexia. She likely would not menstruate.
•If Barbie was a real woman, she'd have to walk on all fours due to her proportions.
•Slumber Party Barbie was introduced in 1965 and came with a bathroom scale permanently set at 110 lbs with a book entitled "How to Lose Weight" with directions inside stating simply "Don't eat."