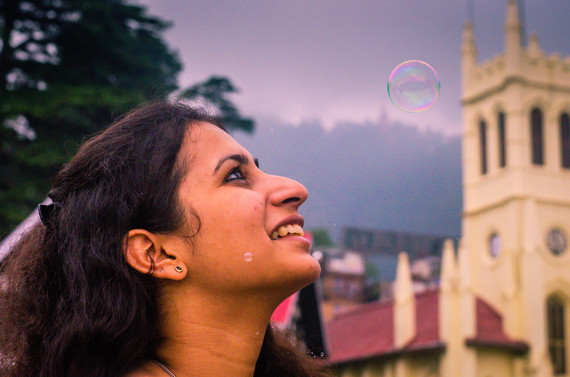 Facing a health crisis, either our own or that of a loved one, makes us feel rattled with fear. Somehow, in spite of that fear, we muster the fortitude and rally the forces to move forward with a deliberate plan for healing. We persevere even when the daunting obstacles we face make us feel paralyzed and full of doubt. Perhaps we are able to do this because we are hard-wired for hope.

In her book Help, Thanks, Wow, Anne Lamott describes the power of hope this way: "Hope begins in the dark .. .the stubborn hope that if you just show up and try to do the right thing, the dawn will come. You don't give up."

In our more doubtful and defensive moments, we might eschew our own or another's sense of hope as we level the accusation, "Oh, don't be such a Pollyanna!" This phrase harkens back to the classic novel Pollyanna by Eleanor H. Porter and the subsequent 1960 Disney film starring child actress Haley Mills. It's the story of a 12-year-old orphan, Pollyanna, who is described as a "cheerful, optimistic youngster" who doggedly focuses on the goodness of life. She is always "glad." She teaches a wide variety of doubters in her new community "how to be glad no matter what."

When she suffers a paralyzing accident, the formerly resistant, crabby, decidedly un-glad community undergoes a change of heart. They come to her assistance by returning the optimism that she had shared so generously with each of them. Everyone is transformed in the giving and receiving of hope.

Over the decades, in everyday conversation, the pejorative stance on being a "Pollyanna" translates to being viewed as a cock-eyed, cheerful-for-no-good-reason, goody-two-shoe. The research, however, does not support this cynical, bah-humbug attitude. Quite to the contrary, scientific studies have revealed a clear bias toward positivity in the way we communicate with one another.

It began in 1969, when researchers, Boucher and Osgood put forth The Pollyanna Hypothesis. Their research included small-scale, cross-cultural studies, which suggested that a universal positivity bias exists in human communication. They uncovered evidence that positive words are not only prevalent, but have a significant impact and ability to shape our thinking and behaviors in a positive direction.

Fast forwarding to this present year, in a study in the Proceedings of The National Academy of Sciences, researchers confirmed the Pollyanna Hypothesis using an exhaustive, data-driven analysis of 5 million individual human scores. They concluded: "Overall, our major scientific finding is that .. .words, which are the atoms of human language, present an emotional spectrum with a universal, positive bias."

When considered only philosophically, hope, more often than not, seems to be at odds with rational, analytical thinking. But due to its proactive nature, hope in action touches the heart and creates its own validation. A good example of this is found in the philanthropic work of Microsoft co-founder Bill Gates. In the 2015 Annual Gates Letter he wrote: "Optimism for me isn't that things will get better; it's a conviction that we can make things better -- that whatever suffering we see, no matter how bad it is we can help people if we don't lose hope and we don't look away."

Hope and a positive outlook embody a creative and contagious quality. This can be seen in the work of the Los Angeles artist Mary Beth Heffernan. The images of the scary-looking suits that the health care workers on the front lines of the Ebola epidemic wore disturbed her. She felt that they made the selfless workers look like "menacing, storm troopers." She wondered how difficult it would be for Ebola patients to not be able to see a person's face for days on end. She believed that there must be a way to alleviate this problem.

This hope led her to create photo kits. Her idea was to take a photo of the smiling health worker and then print the picture on large stickers. Each time the worker donned the protective gear, they would affix the photo sticker onto the chest of the suit. She relayed her idea across the world and succeeded in getting her photo kits to West Africa. Hope and determination trumped each setback and eventually the project started working. The photos have made a huge difference for both the suffering patients and for the tireless workers previously hidden in those massive, protective suits. The health care heroes are no longer faceless. The brave patients feel less isolated and alone because now they can see the warm, friendly human underneath the suits delivering hope.

When all is said and done, we don't need scientific studies to prove to us the inestimable value of having, sustaining and sharing hope. For those of us working hard to improve our health, in spite of huge challenges, hope forms an indispensable infrastructure of internal love and support. Hope tends to beget more hope. By keeping hope alive within us, we are automatically inducted into the Pollyanna Hall of Fame. There we join ranks with Bill Gates and Mary Beth Heffernan and countless others who are determined to bring life and light into places of loss and darkness. It starts with our own hearts.

How do you keep hope alive during challenging times?

This article was originally published on Ornish Living.