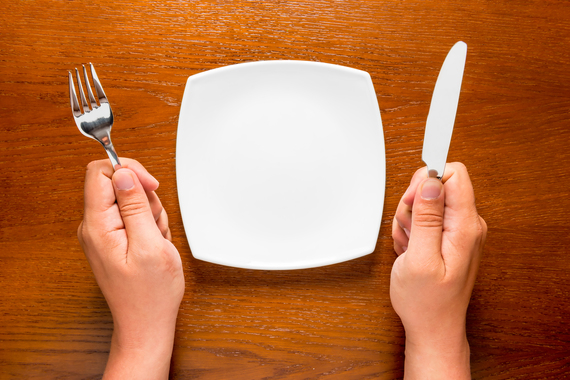 By Kelly Fitzpatrick for Life by Daily Burn

You know the feeling: You were in a rush out the door and skipped breakfast, or maybe you have a huge dinner planned so you're skimping on your usual afternoon snacks. Slowly but surely, your plain old hunger turns into a simmering grouchiness and you're officially "hangry."

While it's not yet a valid defense in court, hanger is a real, physiological phenomenon. When the body is deprived of blood glucose -- which happens when you haven't eaten recently -- the brain receives all kinds of signals to behave aggressively. Here's what's really going on when your empty stomach triggers that rage-y feeling in your head.

What Does It Mean When You're Hangry?

We've all been there: You're snapping at your partner and shooting death stares at the waiter who's slow to take your order. But why? Well, as one study puts it, "Aggressive and violent behaviors are restrained by self-control. Self-control consumes a lot of glucose in the brain, suggesting that low glucose and poor glucose metabolism are linked to aggression and violence." (Watch out, dinner companions.)

Exercising self-control all day long uses a lot of energy, largely in the form of glucose. As Medical News Today explains, our bodies break down food to make glucose, which helps the brain function. A simple shortage of this essential sugar (like when you haven't eaten in the past, say, eight hours) can hamper the brain's ability to exercise self-control, one study suggests.

But there's more to it than that. Lauren Slayton, MS, RD, founder of Foodtrainers, a nutrition practice in NYC, adds, "The body tries to compensate when blood glucose decreases by releasing certain hormones." These hormones, like cortisol and adrenaline, increase aggressiveness, amping up your hangry behavior.

The Consequences of Getting Hangry

Your hanger can manifest in many ways. One study actually measured couples' aggressive urges and behaviors by having them stick pins into a voodoo doll, or blast each other with an air horn through headphones. Researchers found that couples were more likely to behave aggressively toward each other when their blood sugar was low. Even crazier: In one study, researchers cited the Quolla Indians of Peru as historical evidence that hanger is for real. Plagued with chronically low blood glucose, the tribe had a reputation for violence. Unpremeditated murder was common!

Aside from potentially putting you in couples counseling (or...jail), a low blood sugar supply to the brain has other negative side effects, too, including fatigue and impaired concentration, say Slayton. Even if you don't necessarily have an aggressive response to low blood sugar, you may not be firing on all cylinders.

How to Stop Hanger in Its Tracks

The best way to avoid getting hangry is to eat regularly. Slayton suggests a "four-hour rule" -- never go more than four hours without something to eat. It's important to note, Slayton adds, a genuine need to increase blood glucose is not necessarily associated with a grumbling stomach. So you should try to stay ahead of your hunger pangs. (Just stick to healthy snacks like these to avoid consuming too many calories.)

To maintain steady energy levels, foods that are high in slow-burning carbohydrates (like fiber), as well as protein, are your best bet. And while prevention is the best medicine here, you're not totally up the creek if you missed a meal. Fruit, which offers the body lots of easily accessible sugars in addition to having other nutritional benefits, is a great choice for getting your brain a quick hit of energy, Slayton says.

More from Life by Daily Burn:
My Food Diary: What This Super-Fit Trainer Eats in a Day
6 Signs That You're Exhausted, Not Just Tired
9 Weight Loss Success Stories You're Going to Want to See