I came out as gay during my first year in graduate school in molecular biology at Harvard Medical School. In the four decades of the movement for LGBT visibility and rights since then, I have become accustomed to the illogic, deceptions and half-truths used by religious fundamentalists and right-wing politicians to foster homophobia. But I've always held my fellow scientists to a higher standard, expecting them, at a bare minimum, to be rational and factual in their arguments.

Sadly this is not always the case, as was illustrated by the recent Presidential Address delivered by Dr. Neil Risch at the annual conference of the American Society for Human Genetics, the primary professional organization for specialists in human genetics worldwide. His paper, entitled "All in the Family -- or 'Gee our old LaSalle ran great,'" was meant to address the issue of diversity in the field, but instead muddied the water with a series of questionable comparisons, puzzling comments and unsupported speculations about sex and gender that seemed better suited to the era of his favorite car than the oldest and largest international human genetics conference in the world.

In the past, I ignored Risch's attempts to belittle and minimize those of us who study the role of the genome in human sexuality and focused on our own research. But given his power as President of the ASHG to derail the entire field, it is time for people to understand the history of his opposition and the potential impact of his misconceptions. 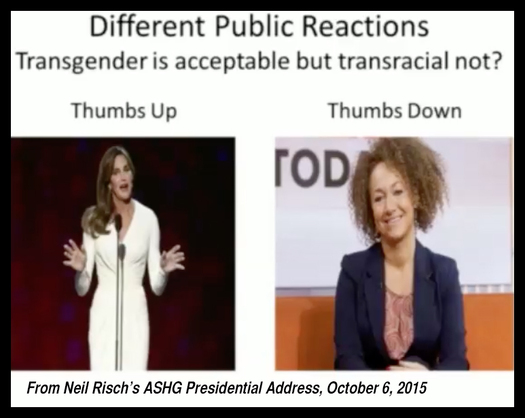 Risch began his discussion of "social identities" -- a term that in and of itself regards LGBT people as members of a club rather than unique individuals -- by showing a slide of Caitlin Jenner next to Rachel Dolezal and saying that he was "struck by the great difference in the public reaction" to them.

Really? It's difficult to imagine how anyone, let alone the leader of an important scientific society, could fail to understand the difference between a person who, after many years of inner torment, finally had the courage to express their deeply felt sense of gender identity and a woman who lied about her parentage to get ahead in her career. Whatever the intent of such a juxtaposition, the consequence is to reinforce the persistent and damaging trope of trans people as deceivers; it doesn't lessen the damage to mislabel Dolezal as "transracial," a term that specifically refers to adoptees raised in a family of a different race.

I was disappointed by Risch's insensitivity, but not surprised. He and I have a history that began more than twenty years ago, when my group at the National Institutes of Health was just beginning our first genetic study of sexual orientation. When I told him about our preliminary results, the response was  "I don't care what the data shows, it can't be right."

Although I was surprised by his lack of scientific curiosity, it didn't deter me from continuing the research. In 1993 we published a paper in Science showing linkage between sexual orientation and a region of the X chromosome called Xq28 in a group of gay brothers, a result that was supported by a second study in 1995 that included heterosexual family members and was published in Nature Genetics.

Risch's own work on sexual orientation was published a few years later in 1999. It was a weak study: there was no formal criterion for determining the sexual orientation of the subjects, just the impression of a "gay interviewer;" the sample size was too small to detect a modest level of linkage; there was no consideration of family structure, despite a previous study showing that this was essential; and the study was limited to just a few markers, ignoring most of the X chromosome. It seemed like the researchers were more interested in discrediting our results than in finding anything new.

Sure enough, their study failed to replicate the original Xq28 findings, delighting the anti-gay forces who trumpeted the news as proof of a "gay gene hoax" and "fraudulent science." To this day, this is one of the most widely known of Risch's scientific publications to the general public, mostly on extreme anti-gay websites.

As it turned out, it was Risch's study that could not be repeated. In 2014, a multi-disciplinary team of scientists supported by the National Institute of Child Health and Human Development reported on by far the largest linkage study to date, scanning the entire human genome of 409 pairs of gay brothers. The results provided a striking confirmation of the Xq28 link, with the most significant association mapping to precisely the same spot that we had discovered twenty-one years before. I was gratified when Science reported on my "vindication."

Although Risch has not published any further research on sexual orientation, he has continued to criticize the field at every opportunity. In his Presidential Address, he questioned the impact of "The Problematic Hunt for a Gay Gene" by quoting Daily Beast columnist Samantha Allen: "In terms of promoting LGBT equality, it doesn't seem to matter as much whether people believe that gay people were 'born that way' as it does if they simply know someone who is currently gay, no matter how they were born. Friendship is the trump card in the movement for equality, not etiology."

It's snappy writing, but is it true?

As it turns out, we actually have data to test this claim. Since 1977, Gallup has conducted large, representative national surveys that include various items about sexual orientation, including the question "Just your opinion, is homosexuality something a person is born with or is homosexuality due to other factors such as upbringing or environment?"

Between 1977 and 2013, the fraction of respondents who believed people were "born with" homosexuality increased from 12 percent to 43 percent, while those who consider homosexuality "morally wrong" decreased from 63 percent to 38 percent. While this temporal correlation is suggestive, a more rigorous analyses is to stratify the population according to their belief about attribution and compare the groups responses to a series of questions about their opinions about same-sex marriage, support for same-sex relations and attitudes toward moral acceptability.

The results are striking. For every one of these questions, people's belief about the origins of sexual orientation is the single most important factor in determining their opinions about equal rights. It is more important, by a large margin, than sex, age, education, religiosity and even self-identification as "born again." And although having gay friends is an important contributor to having a gay-friendly attitudes, it is significantly less so than belief in genetic attribution. For those of us who believe that data is important, etiology trumps friendship, not the other way around.

Risch continued his critique by obliquely raising the possibility that scientific research on sexuality could make LGBT people feel "less than human." That certainly doesn't jibe with my experience of talking, interviewing and engaging with LGBT people and their families and friends, first as a researcher and now as a anti-bullying advocate touring the country with documentary films about gay life in rural America and the Hawaiian tradition of gender diversity.

What I hear over and over again is how a lack of scientific knowledge and understanding hurts the LGBT community: A gay man, about my age, who went through years of electroshock therapy to cure his "disease;" the mother who was beating herself up for "making her son gay" by loving and protecting him; and so very, very many of my close friends who were killed by AIDS because of the lack of rational, evidence-based education and prevention methods. The alternative to studying the origins of human sexuality is to not to study it at all; but since when has ignorance and lack of knowledge ever helped anyone?

The attendees of the Presidential Address were also offered this advice: "Geneticists should in no way contribute to... negative feelings on the part of anyone, no matter who they are or what their life choices are." While it's difficult to disagree with such a piety, the use of the term "choice" in the context of a scientific discussion of sexual orientation is questionable at best. No matter what one believes about the origins of sexual orientation, it is clearly not a conscious choice -- like deciding what outfit to wear or where to have dinner -- but a realization of a deeply ingrained part of one's identity.

In one of the most stinging moments in the speech, Risch again quoted Allen: "Biological explanations for homosexuality are like iPhones -- a new one comes out every year." But given this concern, why did the ASHG press office elect to issue a provocative press release about a preliminary study on epigenetic markers for sexual orientation that was presented at the conference, and then insist on holding a press conference even after the principal investigator asked them not to? The President of the Society knew at least a week previous about the press plans, which resulted in a predictable and quite unnecessary furor in the press and on social media.

Despite my personal history with Risch, I do agree with him on two important points. First, that "social justice and equality are normative values." In my view, gay rights are fundamental, inalienable rights to which we are all entitled in recognition of our dignity as members of the human family. But while science must never play a role in determining these human rights, understanding the biological roots of sexuality does have tangible impact on people's understanding of the LGBT community, and as such helps to shape attitudes, laws and, ultimately, the ability of people to live free and open lives. To ignore this fact is a disservice to both science and human rights.

Second, mentorship in the field is important. Risch mentioned how torn he felt when an African American student told him that he had no role models. But what about the young gay, lesbian, bisexual, intersex, questioning, transgender, gender-queer or non-binary student?

In the most embarrassing moment of the afternoon, Risch attempted to address this issue by saying that "I can assure you that there is at least one individual who has served both on the board of directors and as president who is from the LGBT community." Presumably he was referring to himself, but instead of actually saying so, he cracked a lame joke: "Do I hear those tweets going?" The not-so-subliminal message was that even if it's OK to be gay as a scientist, it must never be talked about or discussed openly -- a reinforcement of the code of silence that has so long held back LGBT people in every walk of life.

There were also gay-supportive aspects to Risch's talk including support for marriage equality. But when the president of a leading scientific society so willingly ignores facts and belittles the entire field of human sexuality research, it sends a chilling signal to both the scientific and LGBT communities. We deserve better than that.