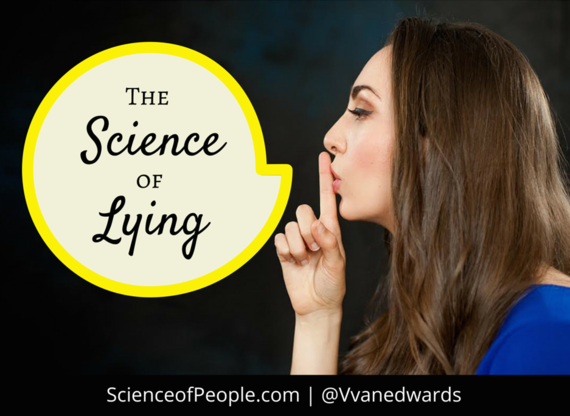 I want to bust some myths about lying by unveiling the truth about dishonesty. Some questions answered in this article:

In this post I am going to take some of the best learnings from our February Book Club book, The Honest Truth About Dishonesty (by Dan Ariely) and the most interesting tidbits from the research on deception.

Lying is a part of human nature.

Even if we don't want to admit it, we all lie. You're a liar. I'm a liar. We lie to others and we lie to ourselves. But here's what's interesting-lying is not rational.

There is some surprising science about lying that will not only help you understand your fellow human beings, but it will also show you how to have more honest relationships, communication and work environments. Read on to find out why.

1. Lying Is Not Rational

Do you believe in SMORC? The Simple Model of Rational Crime (SMORC) says that we decide whether or not to lie or cheat based on an internal cost benefit analysis of 3 factors:

In other words, we don't really think about what is moral or ethical; we decide to cheat or not based on a rational cost benefit analysis. If this were the case, the simple answer to curbing crime and lying would be to have extremely high punishments and lots of watchdogs-police, surveillance cameras and audits. But here's the problem. SMORC is false. Dan Ariely tested the SMORC principle in the lab and found that our cheating is not rational and has very little to do with a cost benefit analysis. Lying is not an internal struggle with pros and cons, it is an internal struggle about how you view yourself...

Remember when I called you a liar at the beginning of this article? Did that make you flinch? Mentally uncomfortable? Angry? We hate to think of ourselves as liars. Research about dishonesty finds that we have 2 conflicting impulses:

Our survive and thrive instincts tell us to cheat, lie and steal to be on top of the food chain. But our communal instincts tell us to be an honest, kind and authentic person. So, while the threat of getting caught or a big punishment can dissuade us from telling the truth, our desire to be a good person is even more powerful. However, there are times when the reward for lying or cheating is higher than our desire to be a good person. And that's where the Fudge Factor comes in.

In order to get the benefits of lying without the shame of feeling like a liar, our brain engages in some tricky rationalization and self-deception. The Fudge Factor is what we do when we allow ourselves to engage in small amounts of cheating or lying so we still feel like a good person. Ariely says it nicely, "We cheat up to the level that allows us to retain our self-image as reasonable honest individuals." In this way, we rationalize small amounts of lying without feeling too guilty. This is because we don't want to miss out on the small rewards cheating might give us, but at the end of the day we still want to be able to look at ourselves in the mirror and feel good. The amount of cheating that happens is equal to the desire for gain minus the desire to be a good person.

4. What Makes Us Lie More

There are certain things that make the Fudge Factor grow. Ariely found that when people feel distanced from the consequences they steal more. For example, using tokens instead of money distances people from feeling like they are actually stealing money, and they therefore take more. Ariely also found that when you remind someone of their past achievements (even if those are false) people steal more because they rationalize that they deserve it. Or perhaps their internal 'good person' thermometer is already high, so stealing or cheating a little bit is ok-hence a larger Fudge Factor. If we think we can benefit others with our lies, we lie more. Altruistic motives make us feel that we are still good people so the Fudge Factor is larger. For example, if one trick-or-treater was getting candy for himself and his baby sister, he would be inclined to take even more candy from the bowl.

5. What Makes Us Lie Less

Luckily, there are a number of things we can do to encourage people to lie less. These center around reminding someone that they are a good person and the need for honesty should be upheld.

6. Do Liars Have Higher IQ?

When Ariely tested liars' IQ, he found that liars are not smarter than non-liars. However, they are more creative. Really good liars are creative and strategic about both rationalization and self-deception. They can come up with (and believe) elaborate tales that both convince them of their morality and justify their lying (extreme Fudge Factor behavior ensues). The more creative a person, the more they tend to cheat. Ariely even found that when he primed average subjects to feel more creative, their lying behavior increased.

When someone has already cheated a little bit, they might have the tendency to keep going. In other words, they think "I'm already a cheater, so what the hell, I'm going all the way." People who were told that they were wearing fake designer sunglasses while completing a challenge cheated more than people who were wearing genuine sunglasses (they were actually identical). Once someone thought they were already 'cheating' by wearing fake sunglasses they cheated more on the task.

Some other interesting findings about lying.

Now that you know the science of lying, how are you going to encourage more honesty in your relationships?

Want to learn to be a human lie detector?

Check out our article on the 7 steps of deception detection.