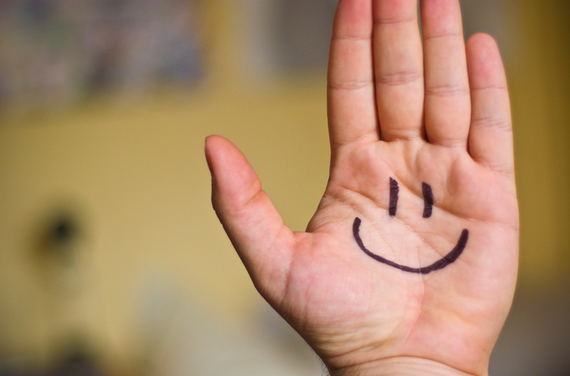 In fact, even faking or forcing a smile reduces stress and makes you happier.

That's what psychological scientists Tara Kraft and Sarah Pressman found when they conducted a clever study to test this connection. The researchers had their participants put chopsticks in their mouths to produce one of three facial expressions: a neutral expression, a standard smile (a "half" smile that stays located by the mouth), or a Duchenne smile (a big one, ear to ear). Only half of the 169 total participants were instructed to smile.

Then the participants were asked to do a series of stressful, multi-tasking activities (such as tracing a star with their non-dominant hand by looking at a reflection of the star in a mirror). The researchers monitored the heart rates and self-reported stress levels of the subjects while they completed the tasks.

The results showed that the people who were instructed to smile had lower heart rate levels and less stress after the activities, and this was especially true for those with the biggest Duchenne smiles. But even those who weren't told to smile, yet had their mouths forced into a smile by the chopsticks, came out of the tasks feeling more content and less stressed than the neutral expression subjects.

Based on the findings, Sarah Pressman (one of the researchers who led the study) said, "The next time you are stuck in traffic or are experiencing some other type of stress, you might try to hold your face in a smile for a moment. Not only will it help you 'grin and bear it' psychologically, but it might actually help your heart health as well!"

Another study looked at the effect of facial expression on depression. The experimenters, Eric Finzi (cosmetic dermatologist) and Norman Rosenthal (professor of psychiatry at Georgetown Medical School) worked with 74 subjects who all had major depression, and either gave them a Botox injection between the eyebrows that prevented frowning, or a placebo saline injection that did not affect the facial muscles.

The findings showed that, six weeks after the injection, 52 percent of the non-frowning Botox group showed a reduction in their depression, compared to only a 15 percent improvement rate for the placebo group. The results indicate that putting on a happy face actually makes you happier.

It seems that the simple act of a physical smile, authentic or not, tricks your brain into thinking you're actually happy. Smiling also triggers us to think back to joyful memories, further improving mood.

In addition to lifting mood and reducing stress, other research has shown that people who smile are thought to be more friendly and likeable, and smiling actually makes those around you cheerier as well.

All of this shows that the old sayings actually deliver great advice -- it's time to turn that frown upside down, grin and bear it, and say cheese!