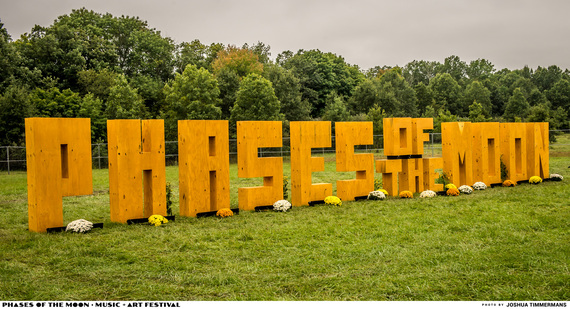 In the world of science as well as metaphysics, the moon is always a divine symbol of transition, synchronicity, and illumination. Its many lunar cycles affect the planet itself as well as the creatures who populate it. What better symbol to represent the theme of a transformational music festival than the cycles of the night sky's incandescent orb.

Illuminating the southern region of the United States is the second annual Phases of the Moon Music & Arts Festival. Taking place on the beautiful Mulberry Mountain near Ozark, Arkansas during the weekend of October 16th-18th, this multi-day camping event will feature live music, performance and visual art, as well as an eclectic array of attractions and activities. The South is unlike any other region in America, adding its own special flavor to an already delicious festival. 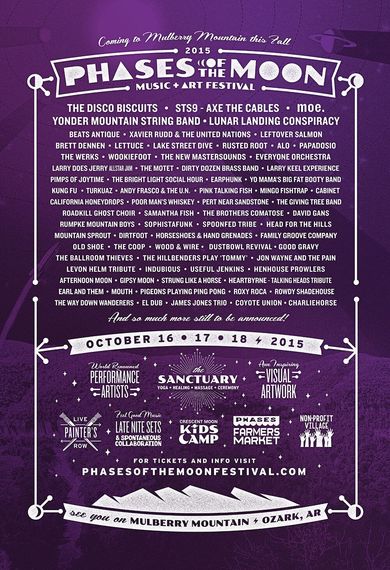 Comprised mostly of (but not only of) jam bands and livetronica, Phases of the Moon's 2015 headliners include The Disco Biscuits, STS9, Papadosio, moe, Yonder Mountain String Band, Lunar Landing Conspiracy, and Beats Antique, among many others. Also, Warren Haynes and The Ashes & Dust Band, Karl Denson's Tiny Universe, Birdcloud and Blaine Cartwright have just been added to the lineup. The ever popular STS9 will perform a rare set of "Axe The Cables" which was last performed over two legendary nights at Red Rocks Amphitheater in September 2014. Revolutionizing the genre of livetronica, STS9 has one of the largest and most loyal fan-bases in the musical underground.

Unlike most festivals, Phases of the Moon's signature event revolves around featuring a new musical "curator" each year whose challenge is to conceptualize and orchestrate a full concert set utilizing the talented cast of musicians, performers and artists present at Phases of the Moon Festival. Returning for their second year, Lunar Landing Conspiracy will be 2015's featured curator. The String Cheese Incident, who was 2014's curator, performed an entire set of "Moon Tunes" with contributions from aerialists, artists and an assortment of well-known musical comrades. Lunar Landing Conspiracy's highly anticipated set creates a unified excitement as a standout performance that is not to be missed. 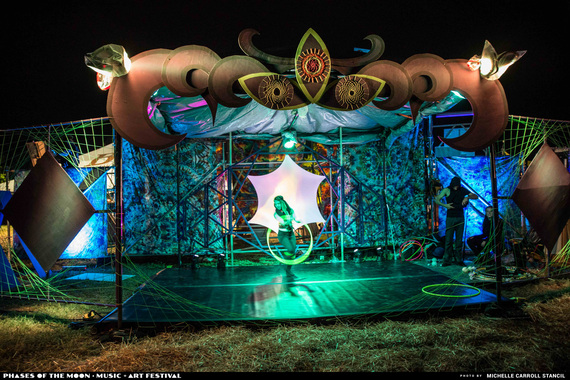 In addition to an intergalactic lineup, an inspirational array of visual stimulation will be displayed from aerialists, fire spinners, stilt-walkers and traveling performance troupes, to large interactive sculptures, major installations and live art. Featuring local and international artists, Phases of the Moon reaches to and from the minds of many cultures. Yet another chapter to add to the grand novel of the festival community, Phases of the Moon is a one-of-a-kind festival with a familiar atmosphere. A perfect fusion of the adventure of discovery and the comfort of community. 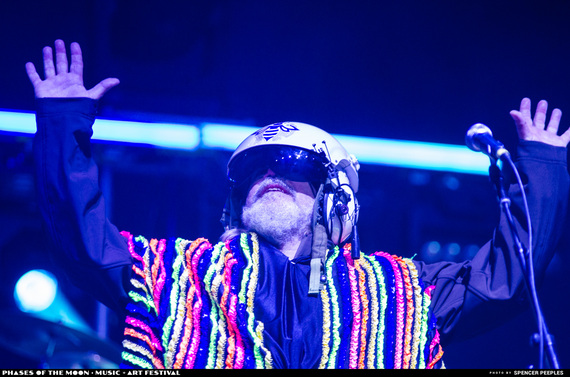 Another signature attraction of Phases of the Moon Festival is The Sanctuary. The Sanctuary will offer attendees a serene space for relaxation, rejuvenation and inspiration in a completely immersive environment. A place to improve the mind, body, and soul, The Sanctuary is where festival-goers will find workshops, yoga, massage, sound healing and more. Hiking, disc golf, the Crescent Moon Kids Camp, Phases Farmers Market, and the Non-Profit Village are additional activities and attractions provided by the festival, opening up a rainbow of possibilities for every hue of human.

Phases of the Moon Music & Arts Festival will be taking place during a waxing crescent moon. As the moon's shadow slowly shrinks and its light spreads taking us ever closer to a full moon, bodies, minds and souls will begin to expand with this light, allowing the moon to achieve its magic. A celebration of both the celestial body and our terrestrial dimension, Phases of the Moon Music & Arts Festival is a place to surrender to bliss and align with the sky.