I've been thinking about the Irish novelist, Brian Moore, a lot lately. Maybe it's because I'm teaching one of his novels right now and that has nudged me to think about the huge impact he had on my own understanding of story. Plus, my mother was born in Northern Ireland, and because of this I was drawn to his earlier novels, which take place in Belfast. Moore abandoned Northern Ireland after World War II and moved to North America where he went on to write 20 novels and win a slew of awards. Before his death in 1999 he was celebrated on both sides of the Atlantic. The guy was prolific -- he produced a novel every other year -- and he was totally devoted to his art. But as I search the internet for him, he's almost nowhere to be seen. It's like Brian Moore has suffered a second death.

To be fair, I didn't really notice his absence on the internet until I was prepping for class the other day. I thought it might be nice for my students to see a TV interview with him. But I found nothing. Radio interview? Nothing. How about a webpage devoted to his life and his powerful novels? Again, almost nothing.

Even though he did plenty of radio and television interviews, I'm beginning to realize that his death in 1999 meant that no one thought to digitize these interviews and put them on the web. He died before the internet took off and it became the warehouse of information and entertainment we know it to be. Not being on the web nowadays means that you don't quite exist, and as I thought about this electronic absence, I began to feel like he was dying all over again.

Go on. Check the internet for TV or radio interviews with him. Aside from a short 46 second clip from a documentary (this one), you won't find anything. 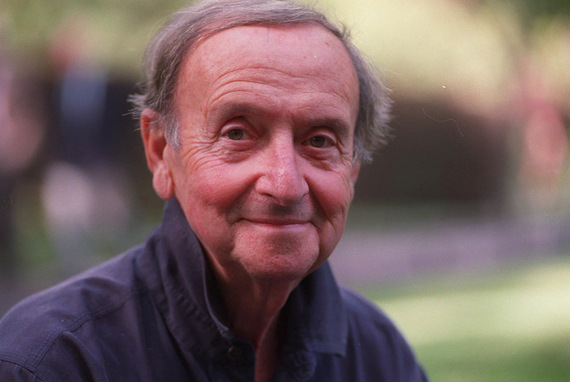 Brian Moore (pronounced the Irish way, Bree-an) was a writer's writer. He led a monkish existence that orbited around the written word, he crafted books that challenged convention, and he is generally lauded as one of the best male writers of female characters in the twentieth-century (if don't believe me, read The Lonely Passion of Judith Hearne or I am Mary Dunne or The Doctor's Wife). He also put Belfast on the literary map and it's arguable that he captures the city, pre-Troubles and violence, in a way that no one else ever did. His relationship to Ireland, Catholicism, and nationalism was testy at best, but it helped him produce some incredible novels. For me, I return to his work again and again because I see a master storyteller at work. Apparently Alfred Hitchcock thought he could spin a good yarn too, and commissioned him to write Torn Curtain.

My favorite novels? In no particular order I'd have to say Judith Hearne, Fergus, The Great Victorian Collection, The Magician's Wife, Catholics, and The Emperor of Ice-Cream. Man I love that last one. It's not his best, but he writes about the Blitz on Belfast in 1941 in a way that's totally mesmerizing. I read that novel in one sitting. And when I finished it, I reached for another novel.

I plowed through all of his work in under two months.

While living in Belfast in the early-1990s, I heard that his childhood home was all but destroyed. Apparently the IRA was using it as a sniper's nest to pick off British soldiers, so it was torn down. When I arrived, it was surrounded by a metal fence--only the kitchen floor remained. I'd heard that everything was going to be smothered under a thick layer of asphalt to make way for a parking lot, so I decided to take a chunk of the floor. Why not? Why not preserve something of literary history?

That's when I heard the click-click of a round being chambered into a machine gun. I looked up and saw a British soldier aiming his weapon at me. My chest was in his crosshairs.

"What're you doing here?" he barked.

I raised my hands with part of Moore's childhood in my fist and explained. The soldier shook his head and told me to bugger off. "This is a restricted area. See that fence? Get out of here."

And I did get out. Quickish, I might add.

To the best of my knowledge, the only part of Moore's childhood home in Belfast is now in Sioux Falls, South Dakota. It's a paperweight on my desk. As a matter of fact, it's sitting under the monitor as I type this very sentence. 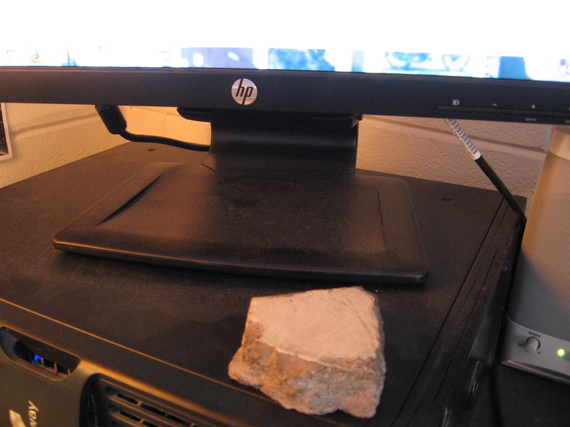 Sadly, I never got a chance to meet Moore face-to-face, but we chatted on the phone once. I was the last person to interview him before he died, and I remember saying that I hoped we might be able to meet up one day, perhaps in Belfast. But he passed away, unexpectedly, on January 10, 1999.

I'm delighted that my current students seem to be captivated by Judith Hearne (I'm teaching it right now) and some of them have already searched out his other novels. This tells me the legacy of Brian Moore will be just fine, but I do wish his presence on the internet was stronger--a web page, links to radio interviews, TV interviews, maybe a list of the movies that have been made from his books.

It's also a good reminder for me that the internet doesn't house everything. We'd like to think it does, but it has plenty of gaps, holes, and missing pieces. One of these sizable holes, at least for me, happens whenever I search for "Brian Moore novelist" and I don't see any videos or radio links. His obituaries pop up, but that's about all.

Maybe that's why I wrote this. Maybe I wanted to do something that would bring new readers towards him. He's worth your time. I promise.