You'd think that by the time my son Harry turned 4 years old in 1994, I would have learned how to handle Halloween. A guilt ghoul swallowed me whole the first time my boy wanted to go trick-or-treating dressed as a girl. But, no, some lessons don't come easy.

The day before our annual Halloween block party two decades ago in Milwaukee, I picked up Harry from junior kindergarten and drove across town to Bartz's Party Store. He didn't know yet what he wanted to be for Halloween and was excited about picking out a costume.

Inside the store, I stood back while Harry walked down the aisle of kids' costumes. He examined the photo on each of the clear plastic packages and stopped in front of a row of different-colored Power Rangers.

"Can I have this one?" he asked, touching the Pink Power Ranger.

I panicked. I'd thought Harry's days of wanting to dress as a girl for Halloween were over. He'd chosen a skeleton costume the year before. I was going to be a vampire and had hoped Harry would follow suit with another fright-night look.

"I'm not buying that costume, Harry," I said, in my most even tone.

I braced myself as his little face morphed from hopeful to confused. I put myself in his pint-sized sneakers and wondered why it was OK to play dress-up in skirts and heels at home but not be the Pink Power Ranger for Halloween.

I was determined to protect him from being teased on a night that was supposed to be all about fun. And I worried, as I had two years earlier, that the uninformed in my neighborhood would peg me as a controlling, overbearing mom who was turning her kid gay.

"What about the Blue Power Ranger?" I asked, trying to hide my sense of betrayal. "Billy's cool. And he wears glasses just like you."

"Or maybe you want to be scary again this year," I said. "There's a zombie costume. And what about that alien?"

Still no reply from my dejected Pink Power Ranger. I felt the presence of the Guilt Reaper and needed to get away from my own scariness.

"Think about it, Harry. I'll be at the wig counter."

A minute later he appeared at my side, sans costume, and helped me pick out a black wig reminiscent of Lily Munster.

When we returned to the kids' costumes, it felt wrong not explaining why Harry couldn't get the costume he wanted. But I didn't know what to say. I did not look him in the eye when I repeated, "I'm not buying that costume, Harry." We left the shop with the Blue Power Ranger outfit.

The next night, Harry and I were in our costumes waiting for the start of trick-or-treating when Harry's dad Ken arrived home with a large mystery bag.

"I didn't plan a costume," he said, "so I stopped at the rental shop near the studio."

"It's a surprise, but I think Harry will get a kick out of it," he said, running upstairs.

Harry giggled when his dad reappeared as a giant caterpillar. But Ken was not your average garden-variety caterpillar. His hooded costume was hot-pink and sunshine-yellow satin. I felt my face flush ladybug-red with shame. Harry's dad was dressed in both colors of the only female Power Rangers -- and the exact pink of the costume I wouldn't buy for Harry.

"I like it fine," I said. "You look hilarious with pink antennae. And you've taught me a huge lesson. I'll explain later."

I wanted to apologize to Harry for not buying him the Pink Power Ranger costume. And I wondered what he thought about his dad wearing pink when he couldn't. I didn't tell him what I was feeling in my heart that night. But I never again stopped him from wearing what he wanted to on Halloween. I think now how sorry I would have been to miss the vampire geisha he put together for trick-or-treating in fourth grade, or the lunch-lady costume he created as a fifth grader. 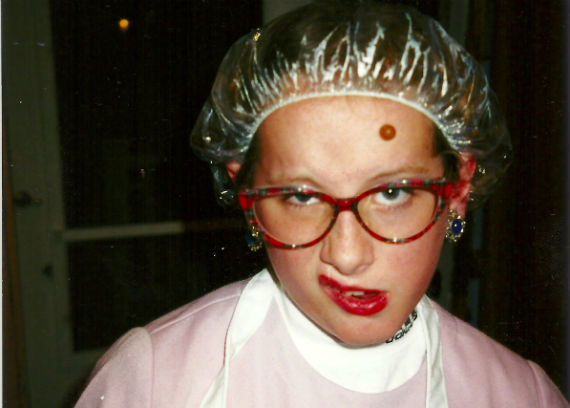