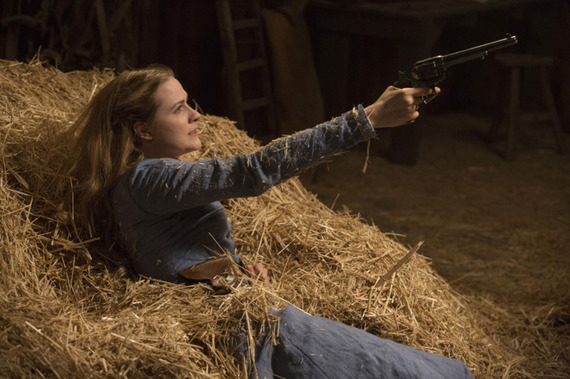 Westworld, the new HBO series about a future in which the ultrarich can indulge their fantasies at a Wild West theme park, advances a fairly bleak vision: Given the opportunity (for $40,000 a day), most men want to have sex and kill people without consequence. And in a park where the "people" are actually robots, and you're paying to do just that, why not?

The owners of the park, God-like creators of beings so real they bleed and cry, pull their creations from the park and repair them if they are harmed or killed. The "hosts" are doomed to live life on a loop: They wake up and do the same things over and over, waiting for a chance encounter with a new guest each day. The range of responses is varied but finite; they can improv, but only a little. For the most part, they live lives of incredible repetition, their memories wiped each time their loop ends or they die. What does it matter? They're not real.

Nowhere in the show is the violent stupidity of men's desires more starkly on display than in the "story line" of Dolores (who we're told is the "oldest" host working in the park). Dolores is a beautiful young woman living at home with her parents on a farm outside the town. And her loop begins time and again: She wakes up, says good-bye to her parents, goes to town to buy a few things. Maybe she meets an interesting stranger along the way. And her story often ends badly: Her parents are murdered by bandits, and Dolores herself becomes a sexual prize in the barn.

But, as the show begins, something isn't right with the robots. Some of them seem to be remembering things, and they're acting out in odd ways. Westworld's management pulls the town sheriff from the park when a fly lands on his cheek, essentially causing what looks like a stroke: He freezes up, ceases to move, and the illusion that he is "real" crumbles instantly. And then there is Dolores's own father, who finds a photograph of a woman in Times Square, dropped in his field by a patron of the park. The photo sends him into a spiral of self-examination about the nature of his reality. But, like the first malfunctioning host, he is essentially paralyzed: He sits in a chair on his porch all day in tears, staring at the found photo. Walter, whose character is "written" to be a psychotic killer, goes on a killing spree, but instead of killing the people he normally does, he seems to be killing other robots as revenge for past acts. He's supposed to kill, he's designed to act out, but he's not acting out exactly as planned. Both men -- Walter and Dolores's father Peter Abernathy -- are sent to storage and replaced.

Related: How Realistic Is Westworld? We Asked a Futurist

It's not just the sad, terrified male robots who are having problems. Both Dolores and the madam of the town's brothel, Maeve, are experiencing something new. Maeve has begun having nightmares about a past life with a young child on a farm, which ends, unsurprisingly, violently. Dolores, in a significant scene at the end of episode two, slaps a fly on her face. It's just moments after telling Westworld management, in her checkup, that she has never hurt a living thing -- and it's in the same episode where a fly made another male host melt down.

What to make of the fly? This show, made by Jonathan Nolan and J.J. Abrams (also the guy behind Lost), is literally begging for Reddit theory spinning, so I'm going to leave it to them (they're doing it, I know, though I refuse to look). What's interesting to me is the potential: Whether the robots are malfunctioning, getting sick, becoming more human, or some combination of those things is a great question, but what's important to note is Dolores's annoyance at the fly, just as much as her gut response to slap it. The fly bothers her. And she doesn't shut down. In contrast to the male robots, Dolores and Maeve seem bent on solutions that fall far outside of their original programming. Maeve has taught herself how to "wake up" from her bad dreams, and indeed, she "wakes up" in the middle of a repair, nude on a surgical table. The engineers working on her argue over whether or not she was put into "sleep mode," but Maeve's first instinct is to grab a weapon -- a scalpel -- and escape. Waking herself from her dreams in Westworld allows her to escape her painful memories of the past, and Dolores, who is also experiencing waking dreams, is the most tortured character in the park and seems poised to lash out.

What we're increasingly being shown, I think, in scenes that take place both within the planned narratives of the park and in scenes where the hosts interact outside the park in the anesthetic halls of Westworld management, is that both Dolores and Maeve increasingly have inner lives, because they seem to have acquired the ability to remember events in their past. And, unlike Dolores's father -- who almost immediately exposes his newly human "flaw" to his makers -- both Maeve and Dolores are a little more crafty and sophisticated. Some of the scenes between Dolores and Westworld programmer Bernard force one to question who is manipulating whom.

Related: 25 Famous Women on Being in Charge

Park creator Robert Ford says, in episode three, that "the least we can do is make them forget," but that denial dooms them to endure the same tortures endlessly, to never learn from their missteps or their misfortunes. Ford misrepresents this reality: It's not humane to make them forget, it is cruel and by design, because they can never benefit from even the most basic conditioning that animals learn when they encounter pain. The only reason Dolores tolerates her life with a smile is that she has been denied her memory. What will prove her growing humanity won't be her ability to pass a Turing test or reflexively kill a fly -- it will be her weighing her options, considering exacting revenge, not necessarily the act of doing so.

Westworld presents the viewer with a multitude of threads to tease out, a dozen pressing questions to search for clues in the little dissonances from week to week. Because we see the same "scenes" played out with slight variations over and over, we are invited to theorize about the nature of reality within the park and what more there is beneath the surface, let alone what's going on outside the park. Only men would create such a world -- and of course, in the show, it's men who have. One of the most interesting questions Westworld seems to be posing in presenting visions of violent and simplistic hatred for women (how historically accurate!) is this: How many times will Dolores be raped, her parents murdered before her eyes, before she decides to take revenge?

How long can men be bad for before women decide that enough is enough? How hard is it to change the course of the future, especially when the story is so well-worn, the outcomes already largely mapped out? And who will be their targets?

More from The Cut:
30 Famous Women on Heartbreak
Here Are All the Celebrity Breakups of 2016
6 Surprising Champions of Women From the 2016 Election
Watch Justin Bieber Storm Offstage After Angry Outburst
11 Non-Cheesy Halloween Costumes You Can Find on Amazon