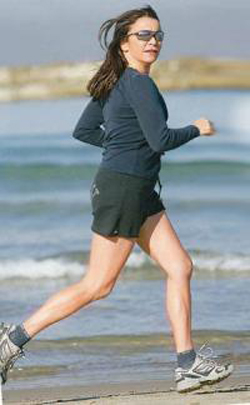 The journalist Nahum Barnea remembers me from this five-year-old photograph by Yossi Aloni as wearing "a tight black bodysuit, revealing and meant to accentuate." And also as someone who intentionally got photographed "as an outright sex object." In his column this week in Yedioth Ahronoth, Barnea makes use of this photograph as it was engraved in his faulty memory and his fantasies to prove that women are guilty of being sex objects and thus inviting rape -- and to blame the victims of former President Moshe Katsav for what happened to them. If an ordinary 45-year-old woman in athletic clothing is an outright sex object for Barnea, then what is not a sex object? A woman covered by a veil? Precisely because Barnea is an important journalist, his perverted messages, his blame of the victims, his primitive chauvinism require a response. And he's getting it.

Under the headline "They Have Power," Barnea brings up a dim memory he recalls from the Labor Party primaries that preceded the general election in 2006. He talks about one female candidate who was photographed on the beach "in a tight black bodysuit, revealing and meant to accentuate what she wanted to accentuate." Barnea also sneaks in a little chauvinistic insult for the unnamed candidate: "Not exactly Bar Refaeli," (the famous Israeli model) he notes derogatorily, "but definitely exceptional."

Since it will occur to very few of his readers that it was I who was photographed in a tight black bodysuit, revealing and meant to accentuate - despite the abundance of details showing that I was the person under discussion -- I will perform a service for my readers and reveal: He meant me.

I invite you on a short journey in the footsteps of Barnea's memory, and from there to his viewpoints and then on to his journalistic writing. Let's begin with the photograph itself, which Maariv photographer Yossi Aloni kindly placed at my disposal.

Barnea has already told you what he saw in the picture. I'll tell you what I see. Indeed, it's not Bar Refaeli, I fully confess. Just a woman of 45, a mother, running along the seashore wearing slightly tattered athletic pants and an ordinary long-sleeved jersey from the Carmel Market, closed and utterly unrevealing, running shoes and rather thick socks.

A bodysuit? Black? Tight? Revealing? Meant to accentuate? Accentuate what exactly? I wonder what was the "protruding organ" that I "wanted to accentuate," which unsettled Barnea's peace of mind so profoundly that he was unable to shake off the disturbing memory over the course of five years and which then came back and struck him again.

It could be that the bare legs upset him, but it seems to me that most women and men who go for a run on the beach wear shorts to do so. Possibly he believes that politicians and candidates in primaries must garb themselves in formal dress also when they are on the beach? Probably not, because if we take a random example, Barnea's newspaper Yedioth Ahronoth ran a photo not long ago of my friend, Social Affairs Minister Isaac (nicknamed "Buji") Herzog on the Mediterranean seashore. Wearing shorts and a shirt much less modest than mine, with short sleeves that offered a view of bare arms - and Barnea registered no objections to that photo.

What in Barnea's mind turns my photo in a sex object?

In his column, Barnea goes on to attack women about their personal responsibility for being presented as sex objects and rape victims, citing my photograph as incriminating evidence of this. But before this, one must ask why in the world did Barnea decide that my photo presents me as a sex object? What makes that photograph sexy? Is Buji, photographed in similar clothing in a similar location, also a sex object? Why doesn't Barnea suspect him or the dozens of other politicians who were photographed in shorts while jogging of arranging a "revealing photo" to turn themselves into sex objects?

For many years, until I chose to go into politics, I worked in the same profession as Barnea, with undeniable professional standing and breadth of exposure (fully dressed). When I moved into politics, Barnea wrote that the traitorous acts of Elhanan Tenenbaum paled in comparison with my transition from journalism to politics. So it appears in the original, no less. Which shows, aside from the obsessiveness and craziness of this dubious sentence, that even Barnea ascribes great importance to my former profession. There's no way to gauge the depths of the chauvinism from which "today she can allow herself to be photographed fully dressed" emerged into the light of day.

Barnea goes on to tell about a column by Meirav Michaeli that appeared this week in Haaretz about the lessons of the Katsav incident. He also forcefully flatters Michaeli, with a wink to the readers, as if to say "See how well I treat another feminist. Three cheers, how enlightened I am." In her article, Barnea writes, Michaeli expresses a heartfelt wish: Once and for all, stop treating women as sex objects.

Yes, Nahum, yes -- it is you, in your own head, God save you, that sees me "as an outright sex object" in Yossi Aloni's perfectly ordinary photograph.

A caressing interview with Katsav

It's the same head that sent you to Katsav for an empathetic, sensitive and caressing interview. It's the same head that caused you to sit silent as a fish hour after hour during Katsav's horrifying appearance at the President's Residence and not to exercise your right to insert even one small question in the rant that was billed as a "news conference." It's the same head that caused you to stand upright like a wobble toy and automatically line up to the right of a sex offender - not least, of course, because he is well-known and famous. To become his mouthpiece, to blur the severity of his deeds, to present with a show of innocence "questions" that were intended only to trample on and weaken his victims. To identify with the strong and the cruel, and to treat him gently, without making even the slightest journalistic attempt to listen to the victims' version.

The leaders in government corruption, headed by Ehud Olmert, also benefited from your protective wall. But when it comes to those who suffered a sexual attack, who are the only crime victims that must prove they are not the guilty ones, the responsibility resting upon your shoulders becomes much heavier. Because at the end of your extremely distorted article, in the two final paragraphs, you also arrive at what you really wanted to say from the very beginning, since my photograph functioned simply as an anchor upon which to base your dark thesis according to which women are to blame for becoming victims of sexual attacks. You accept the verdict in the Katsav trial for lack of any other choice, but refuse to glance in the mirror which that verdict places in front of your behavior, and you simply "don't understand" and then repeat that "it's impossible to understand" how the victims got into their situation. Their behavior is "undecipherable" in your eyes. And this is after a crystal-clear and unequivocal verdict handed down by the court, which ruled unanimously that the women were the victims and that it totally believes their testimonies and moreover, that Katsav used his power and position in order to attack them.

Without a trace of shame, in the same twisting language of one step forward, two steps back until you place the entire blame on the victims, you dare to rebuke them, the victims. Go Nahum, go read the professional literature, go speak with the injured ones. I'll arrange a meeting for you at the support centers for victims of sexual attacks. Learn something about the terrible suffering. About the inferior position, the fear, the captivity that serial sex offenders like Katsav hone in on with bone-chilling expertise, especially when they themselves are in positions of power. About the fact that 80 percent of the victims know their attackers well and are generally under their authority - whether it's an officer, a boss at work, a relative, a counselor or a president. It's clear that you don't feel the slightest empathy for them, but you go far to reproach them. Because they have "their own will" and "power," and "the question of whether women are perceived as sex objects also depends on them, and not just on the men around them." That's what you write.

You have already made it clear to all of us that from your standpoint, the legs of an ordinary woman, not young, not Bar Refaeli, not smiling, dressed simply, on the beach, are perceived as a provocative sex object and she must take responsibility for any resulting harassment or rape. The question arises, if that photo is a sex object, then what is not considered to be a sex object in your eyes? Would it satisfy you if we were to dress as the women in Iran do? And what can we do about the fact that in Iran, too, where women are covered from head to toe with just their eyes peeping out, they are perceived as sex objects and raped at a rate similar to women in Western nations.

I believe in Kohelet's recommendation: "Answer not a fool according to his folly, lest thou also be like unto him" (Prov. 26:4). Except that you are in no way a fool. You are a clever journalist, appreciated and respected, an Israel Prize laureate, and you write beautifully. When I quoted here from your piece, I was also admiring your words -- even the punctuation marks between them were written with artistry. You have tremendous influence on people; therefore, when you carry on the wings of your beautiful words and elevated status messages that are so dangerous, so chauvinistic, so harmful and terrible to victims, so disruptive and confusing to awareness, so primitive and old-fashioned -- there is no alternative but to start to react to them, to those words.