Kubrick, the template that launched millions of beautiful blogs and helped transform the Internet, is expected to be retired mid-year as the default theme for the popular WordPress blogging platform.

The half-life of any innovation in the virtual world, no matter how important, is short -- though in Kubrick's case, it's been a happy life.

It's been the fallback theme on the rapidly growing WordPress since 2005, when young Danish technology whiz Michael Heilemann created the simple blue and white blog template at his family farmhouse north of Copenhagen.

"I wanted something with a nice aesthetic," he said over lunch recently in Santa Monica. "I was drawn to simplicity." 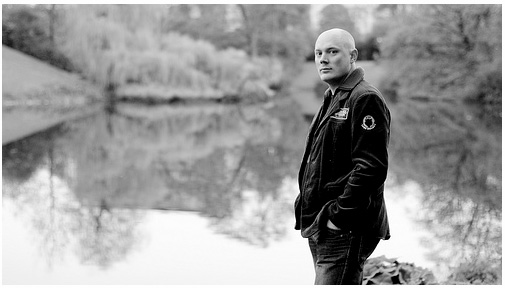 When Heilemann came to blogging, the Internet was studded with posts that were essentially diary entries, blocks of text with the occasional awkwardly situated photograph. The template he came up with was entirely different -- at once elegant and open to innovation. Since its debut, Kubrick has helped change the face of cyberspace, which now is awash in a dizzying variety of blogs that meld moving images with text in innovative and continually evolving ways.

What once was the realm of the opinionated, the pensive and the merely self-absorbed now has become a place where a global community shares thoughts on design, fashion and pure aesthetics.

As with many game-changing innovations, this one has a little known -- and fascinating  -- backstory:

A sci-fi buff, Heilemann -- now 31 and working as a video game designer in Copenhagen -- watched Kubrick's 2001 on DVD during the months while he was configuring the new blog template. His design code started out like this:

With a clever and dry sense of humor, Heilemann ended the code with an invisible note that referenced Hal the computer's final refrain in 2001: A Space Odyssey:

/* "Daisy, Daisy, give me your answer do. I'm half crazy all for the love of you. It won't be a stylish marriage, I can't afford a carriage. But you'll look sweet upon the seat of a bicycle built for two." */

Heilemann's blog design was striking (for its time) with a custom blue header and two white columns, a wide one for posts and slimmer one for a table of contents and other useful information. Heilemann set it off against a gray background. Within months of its debut on WordPress, Kubrick had become a standard-bearer in the blogging world. 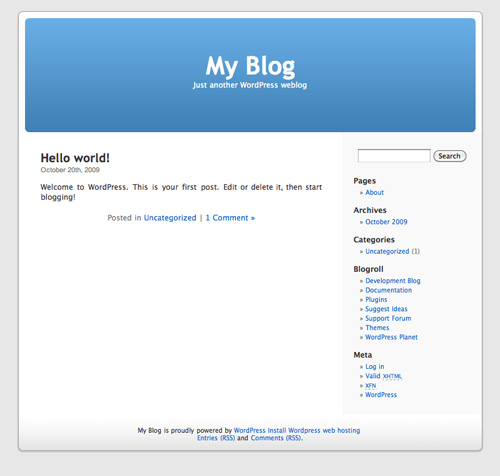 "He had a vision for something that was a canvas," said WordPress founder Matt Mullenweg. "It was a design that could work for any type of blog."

The template, which has spanned thousands of knock offs in every corner of the Internet, is considered a piece of the blogosphere's dynamic history. (Heilemann, who released Kubrick to WordPress as a free download, jokes: "If I had a dollar for every time it was used, I would be rich.")

Yet only the most devoted blog designers know about the origins of Kubrick or the fact that the original code carried an ode to a Hollywood director.

"2001 is just a visionary film in every single way," Heilemann said.  "There's something about it that transcends every other film."

Naming the template Kubrick "seemed like a cool way" to honor the director, although Heilemann still has some reservations. "It seems almost blasphemous,"  he said. "I would hate for someone to Google 'Kubrick' and find my theme."

Why did he add the lines from the 19th century song "Daisy Bell" to the code?

"It's the song Hal the computer was singing while it was dying under the hand of man. I figured those who had seen Kubrick's 2001 would get it.  I also figured anyone who had gotten that far in reading the code should be rewarded with something."

Perhaps Kubrick's biggest contribution is that it has brought cyberspace closer to the realization of one of its earliest and most consistent ideals. Web designers and theorists have long talked about the democratization of publishing on the Internet, the fact that the web puts anyone with a computer on an equal footing with the elite that traditionally has owned the printing presses. In many ways, though, it was a meaningless democracy until the people with laptops had the ability to design and to package their work in the same way traditional media has always done.

The combination of the elegant and versatile WordPress and the ground breaking Kubrick made that possible, turning the democratization of publishing from an idealized concept into a concrete reality.

Almost since its inception, WordPress has issued the template as the default for everyone who signs up for an account.  Last year rumors surfaced that WordPress designers were contemplating retiring Kubrick as the default template because it looks, well, dated, compared to the flashy new themes with their thumbnail galleries and sliding photo shows. Recently, WordPress officials confirmed the rumors.

"When Kubrick was bundled with core back in 2005, it was a cutting edge theme," WordPress developer Jane Wells wrote recently on the blogging platform's new page, 2010: A Theme Odyssey. "Custom header, rounded corners, clean design... if you were using WordPress back then, let's face it, you were impressed. Time moves on, though, fashions change, new styles become old standards, and what was once cutting edge suddenly seems old-fashioned and out of date."

When asked about Kubrick's impending retirement, Heilemann said:  "It's about time."

Heilemann has moved onto other things too. In addition to creating video games, he also has a striking black and white blog called Binary Bonsai in homage to the Japanese and Chinese art -- Asian spirituality is very big among young web folk around the globe -- of cultivating naturalistic, but miniaturized trees.

"In the same way as with the current design of the blog, I wanted the name to be something I had to live up to," he said, "I chose Bonsai because a bonsai tree is a living thing, which needs nourishment and cultivation to thrive. You can steer a bonsai's growth, but you aren't in control of the bonsai itself. All of which was applicable to the idea of blogging.

"And Binary of course, because it's online, because it's nice to say, but also because together, the two words are opposites. Binary is hard, technical, mathematical, calculated, controllable and Bonsai is the opposite; human, living, poetical, lyrical, chaotic."

That would describe the web as well, though it's now a far more beautiful chaos because of Kubrick -- and its modest Danish creator.