The race for the Best Animation Feature Film Oscar is on. Finding Dory may be the most touching and sentimental contender. On the other hand, The Secret Life of Pets has got to be the coolest of the challengers so far. It's a thoroughly amusing comedy thanks to the over-animated Kevin Hart and dour sarcastic Louis C.K. Those two make the lead characters vibrant. They make you want to get your bark on. 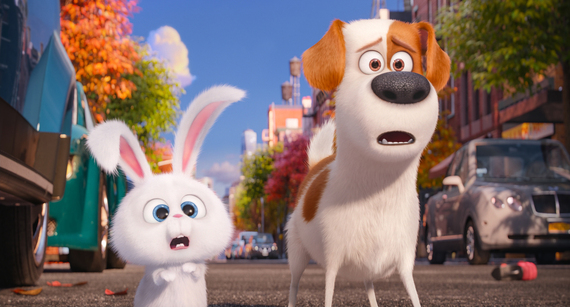 (Photo courtesy of Universal Pictures)
Kevin Hart and Louise C.K. co-star in the animated comedy The Secret Life of Pets.

A funny script by Cinco Paul and Ken Daurio and crisp direction by Chris Renaud and co-direction by Yarrow Cheney, the team behind Despicable Me, help get things off to a good start. They get you into the heads and mindsets of Manhattan pets who may be more aware than their owners can imagine. These animals are gaming the system.

When Katie (Ellie Kemper, The Office) shuts the door of her New York apartment, she has no idea what her rescue dog Max (Louis C.K.) does. He's a sociable terrier, the big paw on campus in her building. In a language they understand, pets behind closed doors converse. Max is pals with the selfish, snippy cat Chloe (Lake Bell), who purrs, "As your friend I don't care about you, or your problems."

And it is with those deaf ears that Chloe listens to Max pour his heartache out after Katie brings home a big buffoon mutt named Duke (Eric Stonestreet, Modern Family), who steals Max's thunder and their owner's attention. The two jealous, love-envy dogs scheme against each other. Both want to be the solo pet. Their testy, backbiting squabbles find them out on the street, with their dog collars gone, and captured by animal control--dogcatchers. They're in luck when a renegade small white bunny rabbit named Snowball (Kevin Hart) frees a dog from the catchers' paddy wagon and liberates them too.

Max and Duke follow Snowball to his underground, sewer lair. (Teenage Mutant Ninja Turtles: Out of the Shadows had a similar setting.) The belligerent bunny leads an army of pets who've been abandoned by their owners. In a voice as militant as a gang leader's, Snowball tells a room full of followers, "All of us have suffered at the hands of humans. They say they love us, then they throw us out." His militia group, "Flushed Pets," is out to destroy humanity as revenge for their ill treatment. Afraid for their lives, Max and Duke must swear allegiance to Snowball and his guerrilla movement.

It's a nice setup for antics that take viewers around the city of New York, from the gutters of Manhattan to the bowels of Brooklyn and the famous bridge that connects the two boroughs. Watching the animals don human characteristics and dialogue is very reminiscent of the Looney Tunes days with Bugs Bunny, Daffy Duck and Tweety. Indeed, some of the shtick, like watching Max and Duke get sucked into a sewer whirlpool or eating themselves into a stupor at a sausage factory, feels like vintage comedy.

The key difference between the classic old cartoons and this new rendition is the urban setting and the cheeky, malicious over-the-top clown fest that comic actor Kevin Hart instills in the very rebellious and crazed Snowball. That motor mouth, hellfire rabbit should start drinking decaf. Jenny Slate's interpretation of Gidget reaches a pinnacle when she pimp smacks a bald pink feral cat named Ozone (Steve Coogan, Philomena) who is reluctant to give up Max's whereabouts. Also the steady, optimistic yet insecure portrayal of Max by Louis C.K. gives the entire film solid footing.

Production design by Eric Guillon along with Colin Stimpson's art direction creates streets of colorful town houses that look like they were ripped out of a pastel storybook. Computer graphics supervisor Bruno Chauffard also contributes to a very distinct and visual appeal that makes the footage (91 minutes long) fun to watch. And the pacing (editor Ken Schretzmann) is near perfect. No time for a nap, you're on your feet the entire time.

This film deserves its PG rating with its reckless but funny talk about killing pet owners in revenge. It's an absurd notion that raises a smile if you are of a certain age. But if you're a little one (six under), this plot device might need some explaining by an adult. Parents, even while they are smirking, may wish the Flushed Pets characters' rebel-rousing propaganda was a tad less extreme and threatening.

At some point in this animal story, the creatures figure out they will have to work together to survive and conquer. That is the message adults and kids will have internalized when they exit the theater with an inner glow brought on by the charm only mischievous pets can bring.