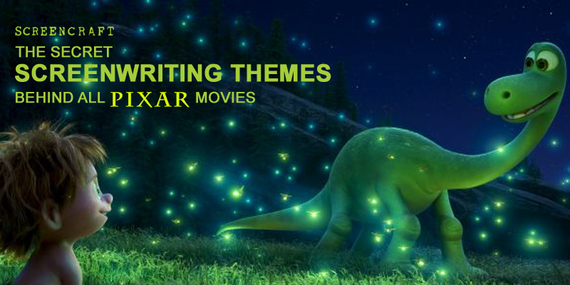 Themes are often hard to define for screenwriters and the powers that be within the film industry.

To some, themes encompass the core of the film. Screenwriter John August (Go, Big Fish, Charlie's Angels, Titan A.E., Charlie and Chocolate Factory, Corpse Bride, and Frankenweenie) defined it best by calling it "the core idea or DNA."

He went on to say, "Once you feel confident what your unwritten movie wants to be, you make sure every scene and character and line of dialogue services that ideal. That's the work of screenwriting, and it's hard, to be sure. But if you don't pick a target, you're unlikely to hit anything worthwhile."

Some define theme as opposing forces (man vs. nature) while others offer more general terms and phrases like revenge, the battle, love conquers all, good vs. evil, etc.

The truth is, there's no definitive answer regarding themes found within screenwriting and film.

Themes can be central, as John August detailed. They can be minimalist, as you’ll read below. There can be many or few of them.

Pixar has done a masterful job of putting story and character at the forefront of each and every one of their films since the original Toy Story debuted in 1995. ScreenCraft has showcased Pixar’s 22 Rules of Storytelling and they have further proven with the debut of their 16 feature, The Good Dinosaur, that they are perhaps the most progressive storytellers in the film industry despite always seeming to embrace similar themes throughout their films.

Vox created an excellent infographic exploring all of Pixar's themes and how their films are connected by them.

Join us as we explore how many of these connected themes apply to The Good Dinosaur, why such Pixar themes resonate with audiences so much, and how screenwriters can apply such themes to possible great success in their own projects. 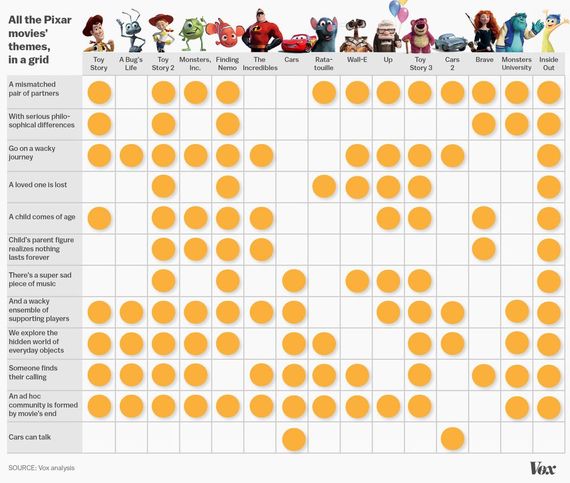 A Mismatched Pair of Partners

The Good Dinosaur is a perfect example of this common Pixar theme. Nothing could be more mismatched than the likes of a dinosaur and human boy, but the enticing part of the story is seeing how similar they are despite those differences.

Look no further than a movie like The Odd Couple or Pixar's original Toy Story. The characters are truly polar opposites and the engagement of the concept is watching as these characters fight through their differences and often learn that they are more alike than they thought.

What this theme offers is instant conflict, which is the root of all great storytelling and characterization. It's a conflict that needs no introduction and very little exposition.

The Good Dinosaur's Arlo and Spot have a much different philosophy on life due to the differences in their intellect. Woody and Buzz in Toy Story find each other on opposite sides of the spectrum with Woody wanting no change and full control while Buzz grasps adventure and action.

Inside Out's various emotion characters all thrive on different philosophies based on the emotions they represent.

The draw of the mismatched pairing theme is escalated when they also have clear opposing philosophical differences. This leads to more conflict and fun as such differences are explored and dealt with.

Ralph Waldo Emerson famously said, "Life is a journey, not a destination." Nothing could be truer than within the context of great storytelling.

The journey is what makes a film. Arlo and Spot in The Good Dinosaur go on a perilous journey in search of Arlo's home. During that journey, they come across unlikely friends and terrifying foes. And they learn from each of them.

Pixar has embraced this theme so well in their collection of films. Look no further than one of the ultimate journeys of cinema with the likes of Finding Nemo. Nemo and his father find themselves on different journeys with different struggles over vast ocean territories and, in Nemo's case, through the compacted world of an aquarium and dental office.

It's the journey that defines character. The actions and reactions showcase characterization so well as the characters deal with each and every conflict thrown at them. All too often, the more perilous the journey, the better the characters are within any screenplay.

A Loved One is Lost

What could be more heart wrenching than losing a loved one?

In Finding Nemo, a son is lost. In Wall-E, a love interest is lost. In Up, a man mourns the loss of his soul mate. And in The Good Dinosaur, young Arlo has lost someone very dear to him (avoiding spoilers here).

The loss of a loved one is perhaps the ultimate conflict for any character in any screenplay. It can lead to powerful emotional themes of guilt, anger, longing, and sadness, which can then lead to action themes like revenge, a quest, soul searching, etc.

A Child Comes of Age

The Good Dinosaur's Arlo struggles to find a way to make his mark on life, both figuratively and literally. Nemo comes of age after his journey teaches him how to take care of himself and appreciate the love of his father. The children within The Incredibles learn about their powers and understand that they come with great responsibility. Merida from Brave comes of age as she struggles to save her mother. Riley and her emotions move on after the difficult time they’ve had during her family’s relocation in Inside Out.

This theme is perhaps one of the most profound in cinema. Some of our best and most memorable films have explored the coming of age. E.T., Stand By Me, Boyhood, The Breakfast Club, American Graffiti, The Outsiders, Dead Poet's Society, etc. Such films connect with audiences because we all go through those times in our lives. We identify with that struggle to find ourselves and to grow, thus it's a successful theme for Pixar, or any other film.

Whether it be a parent or any character, such a realization is confounding, thus it leads to amazing characterization and conflict within any screenplay.

Marlin in Finding Nemo struggles to realize that his son is growing up and can't be confined by the fears he has as a father.

Mr. Incredible and Elastigirl in The Incredibles struggle to realize that their children have powers that can't be contained.

This theme forces characters to change. And with change comes conflict. And with conflict comes great storytelling.

A Super Sad Piece of Music

While this is one of the more minimalist themes, it's a key part of every great Pixar film and all too often many others.

We read complaints about how music can be used to manipulate an audience reaction, whether it's from an animated film or Steven Spielberg.

The funny thing is, that's the whole point. Any emotional moment, whether it be accompanied by music or not (the screenwriter has no say over that fact), is manipulation on the part of the screenwriter or filmmaker.

In the case of the rousing musical score, such moments are accompanied by emotional elements of the story that will resonate most with an audience.

The music accompanying the scene of Jessie telling her story of losing her Emily in Toy Story 2 showcases one of the core themes of the whole franchise.

The music accompanying the scene of Sally remembering what Radiator Springs used to be like in Cars gives us a feeling of how these characters are clinging to the past.

So whether you're a filmmaker working on the musical score of a film or a screenwriter writing an emotional moment, know that it's imperative that you touch the audience in any way, shape, or form.

This common Pixar theme is about world building. No other studio is as good as Pixar in that respect.

The Good Dinosaur dazzles us with a world of characters that Arlo and Spot come across on their journey. Without those characters, they're just hiking through the woods.

Then you look at the worlds Pixar has created with their Toy Story, Monsters Inc., Cars, Finding Nemo, A Bug's Life, and Inside Out films.

Audiences fall in love with those supporting characters. They fall in love with the world that is created by them. These characters don't need to have major back stories or exposition. They exist to serve the lead characters, support them, oppose them, and touch on the core story themes. Thus, it's important for screenwriters and filmmakers to build worlds around their lead characters to enhance that experience for the audience.

The Hidden World of Everyday Objects -- or Beings

What if toys came alive while we are away? What if cars existed in a world where they could talk, feel, and interact? What if bugs lived like humans in their tiny world? What would life be like as a fish in the open ocean? What if our emotions were actually living beings controlling our every thought and action? What if there really were monsters in our closets? What if dinosaurs survived and evolved?

These are concepts born of this theme and the reason they resonate so well with audiences is that they are so identifiable in their lives. Everyone has wondered at one time or another what life is like as a fish or bug. Everyone is aware of the monster-in-the-closet myth. These are concepts born of the very things around us and the more imagination we have, the more questions like this can be raised, leading to some amazing concepts that engage the audience quickly.

Someone Finds Their Calling

Audiences relate to the struggle of a character finding their path in life. We all go through it.

Woody discovers his part in Andy's life and throughout the Toy Story films we see that evolve.

In The Good Dinosaur, we watch as Arlo finally makes his mark in life as he overcomes his fear and his loss.

The Incredibles discover their place in their world after being forced to live in hiding for so long.

This is a theme that leads to the aforementioned journey, which in turn leads to conflict, great storytelling, and amazing characters.

An Ad Hoc Community is Formed by Film's End

In the end, audiences want to be left with a little hope. Sure, there are plenty of films that don't accomplish this and still succeed, however, there's something to be said for those that do and have audiences walking out of that theater with a smile on their faces.

It goes back to world building. Whether it's nearly every Pixar film or through the likes of the Star Wars franchise, the Harry Potter franchise, the Shrek franchise, or the Marvel Cinematic Universe. Audiences are compelled by the journey the characters go through and are pleases to see the happy ending of all of them together in the end in any way, shape, or form.

These above principle themes found in Pixar films prove that because they are so widely used throughout their catalog of films, and because Pixar has been so successful as a result, screenwriters should take note and consider exploring such themes within their own screenplays.

What's the old adage? The proof is in the pudding. Well, from a storytelling perspective, there's no better pudding than Pixar.