An interview with Thorsteinn Fridriksson, CEO of Plain Vanilla Games 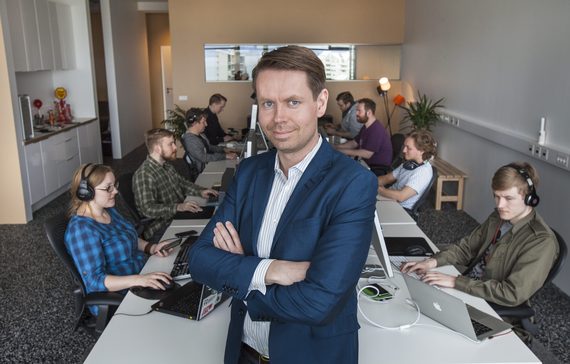 I'd be lying if I said it wasn't a little strange to randomly discover a game on the App Store on a Sunday afternoon, have over 60 friends begin using it by the next day and then be interviewing the CEO/founder of the company that developed it the day after that. But, like the growth of QuizUp over the last two weeks, sometimes things escalate quickly.

QuizUp is a new game for iOS devices that claims to be the biggest trivia game in the World. By combining an insane amount of questions and categories with gorgeous UX design, and unique social features that allow users from around the world to interact with people who share mutual interests, QuizUp has created what some are calling the most perfect trivia game ever made.

I was lucky enough to chat with Thor Fridriksson, the founder and CEO of Plain Vanilla Productions (the creators of QuizUp) after he arrived in San Francisco on a flight from Boston. His flight had originally been delayed, delayed, delayed and ultimately canceled in Boston, but while waiting around in the terminal for hours he had the surreal experience of witnessing strangers around him playing his game. Keep in mind -- a game that had just been released only a week ago, had spent almost nothing on marketing and was built thousands of miles away in Iceland.

This is not how things usually work for mobile game developers, and what may seem like an overnight success was actually the result of almost three years of hard work and an obsession with creating an amazing product.

According to Fridriksson, "the QuizUp you see today is actually the fourth iteration, after the team had decided to completely scrap the first three versions and start over from scratch each time." This commitment to perfection is obvious within minutes of playing QuizUp. The colors, shapes and animations all work together in harmony to create a user experience whose elegantly simple functionality borders on magic.

Along with taking the time to perfect every aspect of the app's design, QuizUp took a unique approach when obtaining their trivia questions. They chose to crowdsource the questions directly from individuals passionate about their specific topic rather than paying to farm the content en masse. This resulted in over 150,000 questions in nearly 300 categories by the time they launched. Fridriksson said that, "when you go to people who are deeply passionate about a topic they will be eager to contribute quality content." All of this attention to detail and focus on making the perfect trivia game is clear when you look at what happened after they launched.

Apple's App Store, especially the games category, is brutally competitive. All of the experts that Fridriksson and his team consulted prior to launch said that they would need to throw tons of money into marketing before they would see any organic growth. What happened was the opposite. The way Fridriksson described the growth to me was "incredibly viral," and that after looking at the numbers from the first day they "decided not to spend another dime on marketing." I personally left the 'new friend' notifications on and it was funny to watch as one of my Facebook friends would get the app, and then within twenty minutes I would see notifications that several of our mutual friends who the first person was closer with had joined. Presumably coerced by the first friend.

Within about 10 days of release, the app has been downloaded over 1.5 million times and users were playing over 10 million games a day. These numbers even beat out the record setting DrawSomething app that was sold to Zynga for $200 million dollars last summer. Despite impressive download stats, the most impressive number by far is the average daily playing time of 40 minutes. For comparison, this amount of engagement is roughly double the average time spent on Facebook, and over triple that of Twitter.

Users Are Making the App Their Own

Fridriksson and his team have been blown away the outrageous amount of user engagement. But the most interesting part isn't how much users are engaging, but rather that they are engaging in ways the team hadn't even anticipated. Fridriksson explained to me that they are seeing "tiny social pockets" materializing within topics and through the extensive social/communication features of the app. Fascinatingly, a "social network of sorts" is organically growing within individual topics. You can go to the discussion boards of economics and history and see genuine intellectual discussions, or hop over to Justin Bieber trivia and see more "colorful" discussions.

In some ways QuizUp is almost like a social discovery engine where you are constantly matched with new people who share mutual interests from all over the world. Even if sometimes it is only for a fleeting seven round trivia match, the game is connecting people in a uniquely compelling way. For the time being, Fridriksson and the rest of Plain Vanilla Productions are focused on keeping the service running smoothly in the face of so much unanticipated traffic. However, going forward the team has a number of exciting and innovative features planned for the future.