Last weekend in New York City, Ram Kolli defeated the reigning USA Memory Championship Nelson Dellis to win the 16th annual USA Memory Championship. Readers of my book Moonwalking with Einstein: The Art and Science of Remembering Everything will remember Kolli as the "mental athlete" I went toe-to-toe with when I won that same contest in 2006. 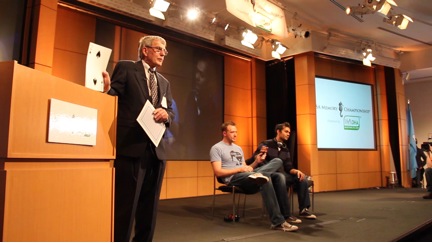 Here's the thing: Despite being U.S. memory champions, Kolli, Dellis, and I occasionally misplace our car keys, just like everyone else. We don't actually have great memories. Rather, we know how to use the memories we've got more effectively in certain contexts, thanks to a set of mnemonic techniques invented in antiquity.

One of those techniques, known as the memory palace, was supposedly invented by a Greek poet 2,500 years ago. It involves converting information into wild, wacky and strange (and therefore memorable) images, and then visualizing those images in your mind's eye, inside of a building you know well. Cicero used the memory palace to memorize the speeches he delivered on the floor of the Roman senate. Medieval scholars used the technique to memorize entire books.

Last weekend, Dellis, the championship runner-up, employed memory palaces to memorize 302 random numbers in just five minutes, and the order of a shuffled pack of playing in one minute and seven seconds. He used a related technique to memorize 162 first and last names of total strangers.

It's nice (and occasionally handy) to be able to memorize lists of information, and numbers, and people's names, but it's important to remember that memory athletes are just using tricks to perform these feats. They're tricks that take advantage of some very basic principles of how our minds work.

The most important of those principles is that we remember when we pay attention. We remember when we engage deeply, when information is made meaningful, when it's colorful, when we're able to integrate it into the web of all the other things we know. Memory techniques, like the memory palace, may sound like miraculous shortcuts. But in fact they work precisely because they make you work. They take effort. They force a kind of depth of processing and a kind of mindfulness that many of us don't normally walk around exercising. But that's what it takes to remember -- and to live a memorable life.

If it's a woman named Abby, imagine a bee stinging her eye. If it's a guy called Bill, imagine him with a duckbill for a mouth. -- Joshua Foer

For example, if you want to remember someone's name, the first and most important thing you can do is pay attention -- real attention -- when a person introduces herself. Most of the time, we forget a person's names because we never properly encode it in our memories. Our minds are elsewhere, or we're too busy thinking of the first clever thing we're going to say back.

To make a name memorable, try creating a visual association in your imagination between the person's name and face. If it's a woman named Abby, imagine a bee stinging her eye. If it's a guy called Bill, imagine him with a duckbill for a mouth. If it's someone named Barbara, picture a crown of barbed wire around her head. Create these images in your mind's eye with as much color, action, and meaning as possible. For example, don't just picture a bee stinging Abby's eye. Hear the bee buzzing, imagine her eye swelling, and try to feel how painful it would be. The more senses you can use, the better.

That simple exercise creates a set of links between your memory of the person's face and name. The technique works because it forces you to engage more deeply with the person's name than you're used to. The more you think about something--the more you can engage in what psychologists refer to as "elaborative encoding" -- the more memorable a piece of information is likely to be.

If attention and engagement are the secret to remembering, then that raises an interesting question. How much of our lives -- our already short lives -- are we comfortable losing because we're buried in our smartphones, or not paying attention to the human being across from us, or because we're simply too lazy to try to engage deeply with the world around us? The feats of memory champions prove that there are incredible memory capacities latent in all of us, but if you are going to live a memorable life, it takes effort. You have to constantly force yourself to pay attention, to make information meaningful, to engage deeply. You have to be the kind of person who remembers to remember.

Uvalde District Fires Officer Who Is Under Investigation For Shooting Response