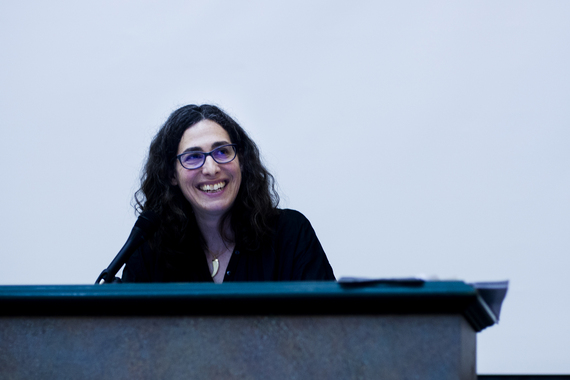 Last month, Boston University held the Power of Narrative Conference which focused on how journalists can stay savvy, skillful, and up-to-date in today's fast-paced and digital-focused world. One of the highlights of the event was the final keynote speaker, Sarah Koenig, host and executive producer of the widely popular podcast Serial.

Koenig's discussion revolved around the unexpected success of the show, whose origins were humble, to say the least, since Koenig had modest expectations. From an estimated 300,000 downloads at most, the entire podcast garnered 78 million, instead -- that's 6.5 million downloads per episode. Koenig had rediscovered the power of radio. Its success was also in part due to its format.

"We designed it so it would feel like great TV. When people listened, we wanted to light up part of their brains that lights up when they watch House of Cards," Koenig explained, "They were enjoying it in the same way that people enjoy escapist entertainment. But it wasn't entertainment; it was journalism. Or maybe it was both."

By modeling the podcast after a TV show and coupling it with dedication and attention to detail, it made the podcast addictive. Much like television, each "episode" was called an episode. It featured a theme song, followed by a short summary to catch up on what had happened in the previous episode. At the very end, there was a question that stimulated listeners.

"Like a TV series," she revealed, "we had to end with a question to make people want to come back to hear the next episode."

According to Koenig, "People weren't used to responding to journalism in the same way they were to TV. I really wanted it to be like a great book on tape."

Yet Koenig realized that those elements weren't enough -- producing the show also needed traditional reporting and close attention to detail.

"Boy, we can't get anything wrong," she said.

Since there were so many people that watched the show, errors were not an option. Serial was designed so that listeners could follow the story, but she also imbued a kind of confusion and doubt so as to keep the listener engaged.

"I like stories where there's a center that's mushy and complicated," she noted.

Koenig successfully demonstrated that podcasts can rival television shows, even if the success of her show lies in adopting the very elements that make television successful. She rediscovered the power of the radio and legitimized a model that bundled serious journalism with entertaining elements. Too often do we read and consume journalism in a dry and serious way. People simply skim headlines and articles with no further interest other than to get the basic facts of the written pieces. Koenig, on the other hand, understood that serious journalism can be combined with entertaining elements, reinforcing the two and producing something new.