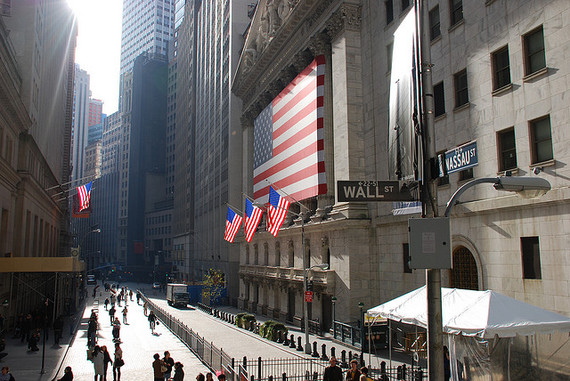 I am not endorsing any political views, but I did note an observation made by Bernie Sanders in the recent Democratic presidential primary debate. He stated that Wall Street's "business model is greed and fraud." There's a lot of data supporting that view.

A history of unethical conduct

The Securities and Exchange Commission (SEC) compiled a list of enforcement actions that led to or arose from the financial crisis. Here's a small sampling:

Citigroup - The SEC charged Citigroup's principal U.S. broker-dealer subsidiary with misleading investors about a $1 billion collateralized debt obligation (CDO) tied to the housing market in which Citigroup bet against investors as the housing market showed signs of distress. The court approved a settlement of $285 million, which will be returned to harmed investors.

Goldman Sachs - The SEC charged the firm with defrauding investors by misstating and omitting key facts about a financial product tied to subprime mortgages as the U.S. housing market was beginning to falter. Goldman agreed to pay a record penalty in a $550 million settlement and reform its business practices.

J.P. Morgan Securities - The SEC charged the firm with misleading investors in a complex mortgage securities transaction just as the housing market was starting to plummet. J.P. Morgan agreed to pay $153.6 million in a settlement that enables harmed investors to receive all of their money back.

Merrill Lynch - The SEC charged the firm with making faulty disclosures about collateral selection for two CDOs that it structured and marketed to investors, and maintaining inaccurate books and records for a third CDO. Merrill Lynch agreed to pay $131.8 million to settle the charges.

Even though penalties ordered or agreed to as a result of misconduct surrounding the financial crisis exceed $1.9 billion, the fines paid by these firms and others amounted to little more than a slap on the wrist. Many believe it's back to "business as usual" for them.

Perpetuating a belief in an expertise that doesn't exist

That "business" means persuading you to give them your money to "manage." This is no mean feat. The data is overwhelming that the securities industry does not have the expertise to "beat the market" reliably and consistently. A recent Standard & Poor's Indices Versus Active (SPIVA) scorecard found that over the one-, five- and 10-year periods ended Dec. 31, 2014, more than 80 percent of large-cap actively managed funds failed to deliver incremental returns over the benchmark.

Think about that information. The S&P 500 index consists of the 500 largest and best-known publicly traded companies in the United States. To "beat the benchmark," all active managers have to do is overweight the winners and underweight the losers. As my colleague, Larry Swedroe, recently noted, 2014 gave them plenty of opportunity to do so. There were vast differences in the returns of the 10 best-performing and the 10 worst-performing stocks in the index that year.

If active managers had skill, surely more than a small minority would have been able to identify the "winners."

As I previously discussed, investors familiar with this hustle have a far better alternative. They can simply refuse to entrust their money to those with no demonstrated expertise. Instead, they can choose to become evidence-based investors and capture global returns using low management fee index funds.

This prospect is Wall Street's worst nightmare. It has marshaled its vast resources and is fighting back with articles extolling the purported benefits of active management.

Jim Cramer leads Wall Street's charge. Here's the "advice" he gave in a September 2015 article to those just starting out on their investment journey. It's so irresponsible that I want to quote it.

Cramer is credited as saying that he believes a diversified portfolio of five to 10 individual stocks is the best way to maintain a portfolio.

The article then goes on to quote him directly: "Now, before you start picking stocks, you need to forget everything you've ever heard about that classic piece of so-called investing wisdom, buy and hold. We don't buy and hold here on 'Mad Money' -- it's a great way to lose your shirt."

As usual, Cramer referenced no data to support these views. In reality, the latest research indicates that, for investors in U.S. equities, to be confident of reducing 90 percent of diversifiable risk 90 percent of the time, the number of stocks required is, on average, about 55. In times of distress, it can increase to more than 110 stocks.

Cramer's observation that a "buy and hold" strategy is "a great way to lose your shirt" is also belied by the evidence. For the period from Dec. 31, 1993 through Dec. 31, 2013, the average investor had an annualized return of about 2.2 percent. Investors who "bought and held" an index fund tracking the S&P 500 earned 8.5 percent, less the low management fees charged by the fund.

Ironically, the best way to "lose your shirt" might be to follow Cramer's stock picking advice. In a well-reported debacle, on April 6, 2015, Cramer gave his hapless viewers a list of 49 stocks to "buy right now." Six months later, only 28 percent of them closed higher than their April trading price. In just six months, investors who followed Cramer's advice lost 7.09 percent of their money.

Once you recognize that Cramer and many others in the financial media are just shills for an industry that wants you to chase returns, buy and sell stocks and bounce in and out of the market, you will have made a giant step toward investing in an intelligent, responsible -- and evidence-based -- manner.