"This is an opportunity for us to say, 'We hear you. We're listening.' And we're responding," Wendell Sconiers, VP-Operations for McDonald's USA says of today's launch of all-day breakfast.

In fact, McDonald's says it has responded to every person who ever tweeted "Why can't we have breakfast all day?" or its variations since about 2007. That was tens of thousands of people, according to a spokesperson, but the company has tried to tweet each of them a "We heard you" reply with news of the all-day debut. 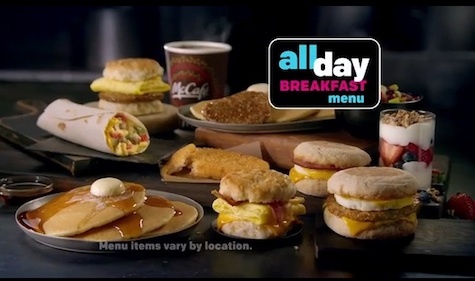 Sitting in a McDonald's restaurant in Downers Grove, Ill., one of the few offering both breakfast all-day and the Create Your Taste customization platform, Sconiers says several factors combined to make this the time for McDonald's to take on an all-day breakfast menu. The consumer demand for it has been there for a long time, as has McDonald's desire to meet that demand, he says. But it has taken three years of testing to answer the "So how do we do it?" questions. 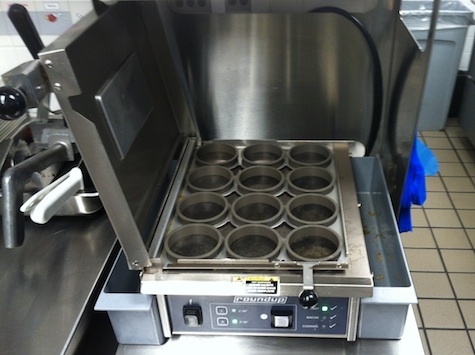 The challenge wasn't just that McDonald's has 14,000 company and franchised stores, says Sconiers. It's that those stores have greatly varying kitchen layouts and equipment packages based on volume, unit age and location. New equipment was developed to answer some of the problems, including "how burgers and eggs can live in the same house" and share flat-top grill space, Sconiers says. For many locations, the answer is a new dedicated egg cooker (above) that can make a dozen at a time for muffin sandwiches. Others have newly reconfigured egg rings that take less grill space and don't crowd burgers. Adding a standalone muffin toaster eliminates a backup at the bun/muffin toaster (especially with McDonald's now toasting burger buns a few seconds longer). Some units have gotten larger grills and some have installed new digital menu boards to better handle and market inclusion of breakfast foods all day.

A spokesperson says franchisees' breakfast investment varies from as little as $500 to as much as $5,000 depending on what's needed to make it work. The Create Your Taste platform, however, can cost as much as $125,000 per store, according to some franchisees. That includes a new, dedicated prep area with its own bun toasting/buttering equipment and sous-vide-like warm-water baths in which sealed pouches of products such as chicken and mushrooms can be kept warm for service. Dedicated prep and tableside delivery staff also can increase costs. 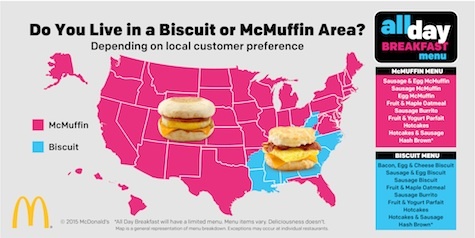 The San Diego all-day-breakfast tests -- subsequently expanded to Greenville and Greenwood, Miss., and then Nashville -- provided insights about not just equipment but also staffing needs and consumer buying behavior. As a result, in preparation for today's all-day launch, each store knows what its additional staffing needs for peak periods will be and how many breakfast-food buyers it can expect beyond the traditional breakfast hours, Sconiers says. He declined to explain the algorithms behind those calculations but says the company is confident it's ready for the change.

Pre-launch ad support has included TV spots from Chicago agency Leo Burnett, which does McDonald's kids advertising, Ad Age reports. TV spots from another of its roster agencies, DDB, begin a three-week push today, although all-day breakfast will get year-round marketing support. "Once you changed how you ate breakfast. It's time to start changing when," says one DDB commercial. Multicultural agencies Alma, Burrell and IW also have created ethnically targeted spots.

For crew members, the all-day model eliminates that dreaded transition time from 10:30 a.m. to 10:45 a.m. when breakfast eaters have to be told they just missed their chance. "No one likes to say 'No.'" says Sconiers. As of today, McDonald's crew don't have to.