There are two sides to every coin when it comes to holidays in the West. Let's take Christmas and Easter as examples.

Reason Number One: Easter has secularized for the sake of money.

Easter is not about a bunny. Easter is about the lamb; crucified and resurrected. Granted, the word Easter does not show up in the bible but is taken from Eastre, an Anglo-Saxon fertility goddess of Spring. Eastre had a rabbit as a companion which explains the incorporation of Easter bunnies and egg hunts during Easter Sunday celebrations. Now, fast forward 2 thousand years (give or take a century).

The first reason religious holidays have quickly become secularized to the point that many, if not most people outside of the church do not know why is for profit. Easter eggs and bunnies are associated with Easter because corporations (candy manufacturers mostly) have secularized Easter for the sake of money.

To me, I have no problem with this celebration but when it overshadows the biblical meaning of Easter and the media and schools put Eastre above Easter there seems to be a problem. But the over secularization of Easter falls directly in the hands of corporations with their Easter egg chocolates, chocolate Easter chicks, and the Easter candy in general (my personal favorite are Peeps).

The word 'Easter' has been quietly ditched from British chocolate eggs, according to religious campaigners. 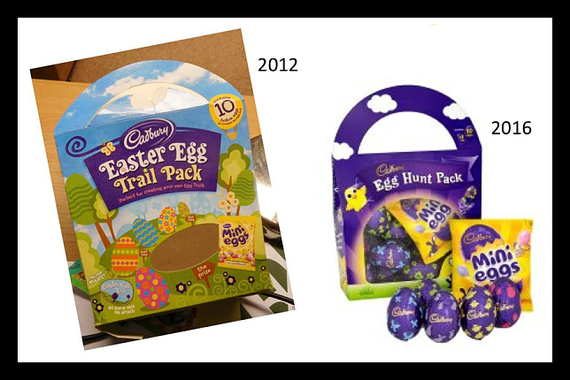 There has been a wave of political correctness by many candy manufacturers Cadbury's and Nestle in the last few years to remove the word "Easter" and all religious connections from their products. The Bishop of Salisbury, The Rt. Revd Nicholas Holtam, are determined to restore the traditional meaning of the Easter story. He goes on to say "It is interesting that there seems to be a real resistance to removing the word Easter from these gifts.

Reason Number Two: The Decline of Religion in the West

The second reason as to why Easter eggs and bunnies are involved with the Christian Easter holiday is because of the decline of people going to church. In an article by The Spectator, 2067: The end of British Christianity,

The Church of England is declining faster than other denominations; if it carries on shrinking at the rate suggested by the latest British Social Attitudes survey, Anglicanism will disappear from Britain in 2033

According to the British Social Attitudes surveys, their numbers fell from 40 per cent of the population in 1983 to 29 per cent in 2004 and 17 per cent last year.

While in America, which remains home to more Christians than any other country in the world, the percentage of adults who describe themselves as Christians "dropped by nearly eight percentage points in just seven years to about 71 percent" . . . at the same time, the share of those "who are not affiliated with a religion has jumped from 16 percent to about 23 percent" in the same time period according to a Pew Research Survey. 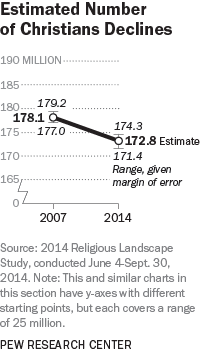 Even as their numbers decline, American Christians - like the U.S. population as a whole - are becoming more racially and ethnically diverse. The conclusions I've reached on the decline of religion isn't because there are more unbelievers (although this is partially true) but because of;

* Religiously unaffiliated Americans out number Catholics and Protestants
* American congregations are aging, and the unaffiliated are comparatively young and becoming more secular
* Religious intermarriage is on the rise
* U.S. census doesn't keep track of statistics on religion, so there are no official statistics on the religious makeup of the U.S. public

Distribution of Christian population by region

So the problem lies between the corporations secularizing Easter for profits and the drop in those who describe themselves as Christians. Will this ever change? As far as the corporations go towards secularizing Easter for financial gains, I doubt it. The drop in those claiming to be religious? I think that those who claim to be religious will always be the dominant more so than those who attend church.