The troubles of the Holy Land have taken a toll on both sides. While one man's terrorist may be another man's freedom fighter, the fact is that in recent decades, both sides have suffered terribly: Palestinians have killed Israeli Jews, and Israelis have killed Palestinians.

Since 2003, Israel has been building a wall around the West Bank in the name of security from terrorism. While Israel calls this the "Security Fence," most Palestinians think of as a degrading and illegal land grab. Israelis would say that it's been effective -- noting that in the three years before it was built, suicide bombers killed 293 of their citizens; in the three years after it went up, that number dropped to 64. Since its construction, terrorist attacks have dwindled. Palestinians would counter by saying that this decline is not because of the wall, but because Palestine, its president, its security forces, and its people have all realized that violence is a losing strategy. Palestinians assure me that if anyone really wants to get through the wall (which is far from finished), it's very easy to do.

It's hard to argue against the land grab case. If the fence or wall was simply for security, as claimed, it would have been built along the internationally recognized border that was defined by the Oslo Peace Accords in 1993. But it's generally well to the Palestine side of that border. In fact, it's nearly twice as long as the border it claims to defend -- gerrymandered in order to protect settlements, aquifers, good farmland, and holy places within the West Bank for Israel. 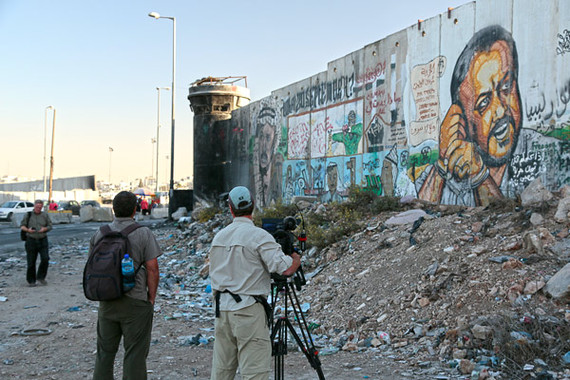 Walls are ugly. They may be necessary, but they represent a diplomatic failure. While it can look almost pretty from the Israeli side, the wall is unfinished and depressing from the Palestinian side. 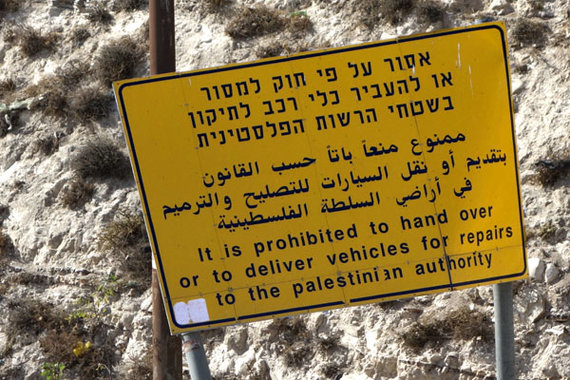 Restrictions and regulations necessary in the days of suicide bombers and violent resistant survive. For example, it's much cheaper to get your car repaired in Palestine than in Israel because the standard of living and wage scale are so different. (The Israeli per capita GDP of about $33,000 is more than ten times that of Palestine's.) But, of course, this could be a devious way for a bomb to be planted and imported into Israel unknowingly by the Israeli owner of that vehicle. So it's forbidden. 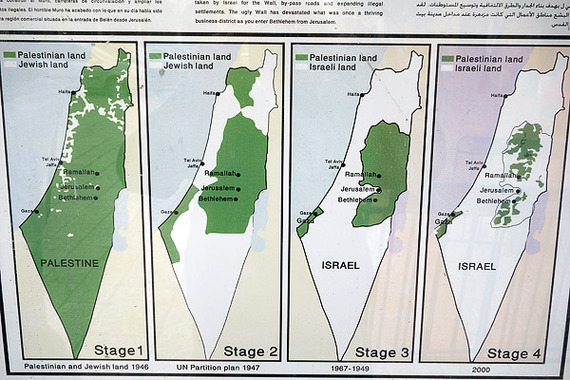 This map is a popular poster you see around Palestine and in pro-Palestinian publications. It illustrates quite graphically how Israeli control of the region is growing. Israelis remind us that Arafat turned down a chance to have a solid two-state option, and that the Second Intifada made the aggressive Israeli approach unavoidable. There is an internationally recognized border with a solid and viable West Bank, but Israel has created a system of designated areas that gives complete control only to "Area A" (18 percent of the land in the West Bank, with about 55 percent of the people), while Israel controls the rest (Areas B and C, used for settlements, natural resources, and the major roads enabling Israel to, when necessary, lock down the country and isolate the cities of Area A). The last map (far right) shows why Palestinians compare their control of the West Bank today to Swiss cheese ("Israel gets the cheese, and Palestine the holes").