Call me crazy but I really hate walking the red carpet at the Emmy's or even worse, the Academy Awards. I walked it once and swore I'd never do it again (unless, of course, I'd been nominated for something. But what were the chances of that?) I always feel under-dressed, under-coifed and badly shoed with whatever choices I hobble together from the closet of "what could have been and never was." But much worse, I can't stand the way the people both on the red carpet and on the outside of the barriers stare at me wondering who the hell I am and how did I sneak in? Which is why I again agreed to go to another red carpet event in Los Angeles in April. (Apparently, I'm a glutton for punishment.)

Something about this particular red carpet told me, however, it might be different this time. This was a movie premiere. About lesbian vampires. Set in 1980's Los Angeles. With a private detective named Dic, filmed like a 40's film noir. 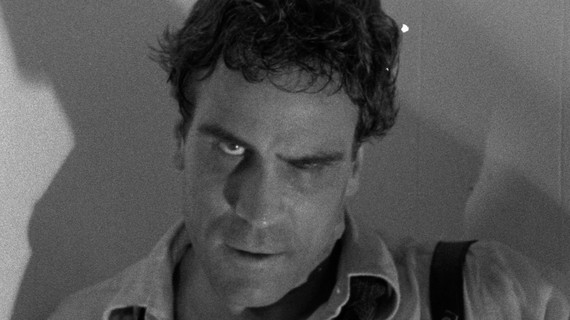 And it was a midnight movie. A midnight movie made in the 1980's that no one had ever seen before. Ever. I was hooked. I figured no one in their right mind would go see this, and I would finally be spared the humiliation of being an outsider. For the first time I would be an insider. Maybe the ONLY insider. How could I say no? If I could stay awake until midnight at my age, the effort just might be worth it. And so I set off from Berkeley to see director Greg Travis' black and white 16 mm noir-horror film Dark Seduction on April 1st 2016. Yes, that's right, on April Fool's Day. 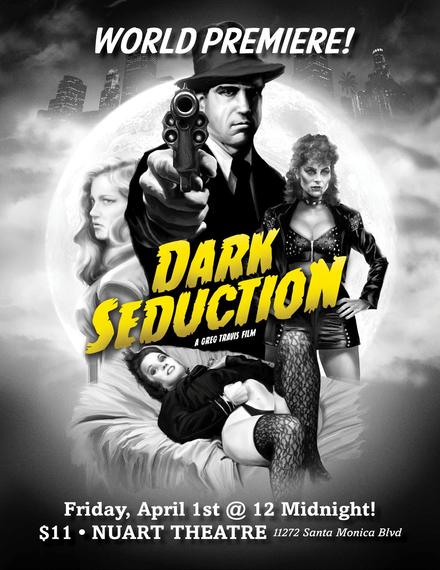 The day before Dark Seduction's premiere I ripped apart my closet looking for something to wear. Hmmm....lesbian vampires? Okay. Black leather pants. Good. Concentric tight straps on spiky heels. A little risky given my predilection to topple over but what the hell. Fangs. Come on, a given. And, of course, a Bite Me pendant. Easy peasy. I had all this stuff readily available because....well... I...um...okay, you figured it out....I was once a lesbian vampire. And I liked it. 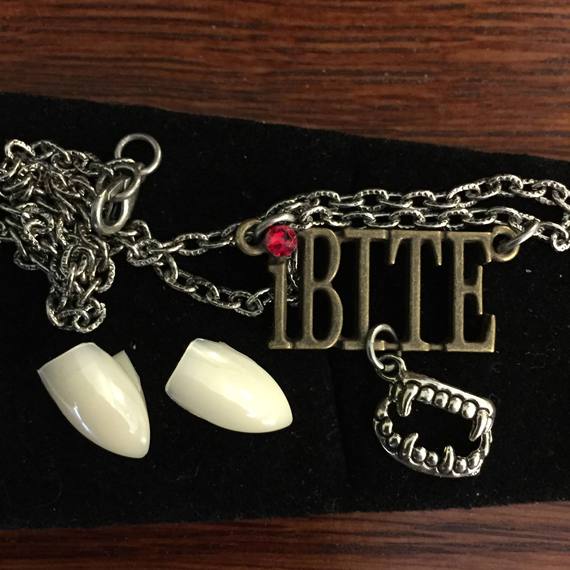 The next day, packed and loaded, I boarded a plane in Oakland, excited that I'd finally be breaking the curse of bad red carpet events. And, not incidentally, that I might even have the historic Nuart Theatre on Santa Monica Boulevard all to myself. This was my idea of a great date night. Single, dressed entirely in black, wearing adhesive attached vampire teeth, watching a movie no one else cared about, all alone. It was a classic Joanna Folino romance.

To celebrate the event, I ate an entire Trader Joe's dark chocolate and raisin candy bar on the flight down giving me an exhilirating rush and causing my blood sugar levels to spike to just up to, but not exceeding, the diabetes borderline. Cut to six hours later.

Blinding headache and chills are now almost completely gone. It 's 11:17 PM. I speed down Santa Monica Boulevard at 30 mph, scanning the streets and squinting at the glaring and blinding lights. I grab my HD Night Vision wraparound glasses with the bright yellow lenses and slip them on. Two guys in the lane next to me are staring. I turn to them and grin, my fangs glistening in the moonlight as they speed off. I know for certain I'm nothing if not darkly seductive myself. And then I spot the theatre.

What's this? A line. Seriously? And photographers? And is that Robert Townsend, the famous movie director standing next to the filmmakers getting their photos taken? There must be at least a hundred people in line and it's not even midnight yet. "What fresh hell is this?" I ask myself, grabbing a parking spot across from the theatre in the lot of a Japanese restaurant. I'm absolutely certain I can't face these folks just yet so I decide to do the only sane thing: eat sushi. I figure lesbian vampires' munching down on the big screen and sushi - well, it's a match made in culinary heaven. I didn't want to lose the flavor of the night.

Once inside the sushi bar standing at the counter, I begin to feel more at ease. So it's Robert Townsend, big deal. He's just another pioneering African American icon. I mean he's no Kanye West, right? 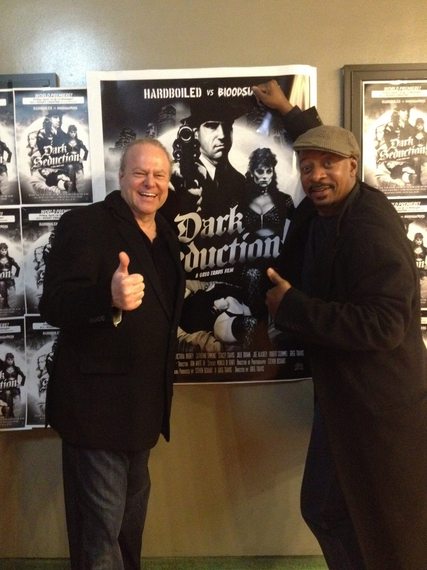 When my sushi is delivered to the table, I decide to survey the moviegoers across the street with the opera glasses I shoved in my purse back in Berkeley. From my vantage point I can visually scan the line to the box office as well as the red carpet area where the cast, crew, director and guests are having their pictures taken.

Hey, is that Andy Dick and his friend? I really like Andy. Is he here because he's a private dick like the main character Dic Jones in the film? Or because he's a celebrity? And how is it he even knows about this? 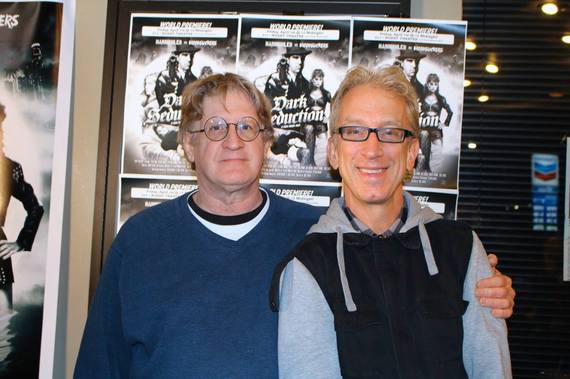 I realize now my research has been sloppy. So I shove a delectable hamachi down my throat wondering how I can get out of this mess with some self- respect and still remain relatively invisible.

As I peer through my opera glasses and follow the ever increasing number of folks across the street, I determine that they are, for the most part, laughing, smiling, connecting and generally having a good time. But why?

Utilizing my always sharp critical thinking skills, I decide that absolutely everyone in L.A. who truly loves lesbian vampires as much as I do is here. I breathe and smile, resting in the knowledge that my tribe is across the street. Finally, I can relax and drink in the night. But as I chew on my second hamachi, it occurs to me something sharp and hard is stuck inside the sushi roll. I spit it out and see my vampire fang poking up through rice. This leads me (predictably) to an existential moment of despair. Should I wear one fang or simply remove the other and be fangless?

Incapable of making a choice, my mind immediately switches to wondering about the history of the red carpet because that's just the way my mind works. Fang? Red carpet? Fang? Red carpet? Where in fact did the red carpet originate and what was it for? And why is it red and not green or purple? Now I'm in a terrible dilemma. The panic's taking over. I order a Saporro and gulp it down. (Given my somewhat delicate chemical balance, in hindsight maybe not the wisest choice.)

By now it's 11:51. I've no fang glue and I realize using a small piece of Dentyne gum to adhere the plastic tooth to my real tooth, could cause problems later if I attempt to speak. I decide to go with one fang and hope no one notices. This gives me about three minutes left to do my research.

I Google "red carpet" and quickly scan the many choices. Then I spot it. The secret to the whole evening. The story of Clytemnestra. Why of course. 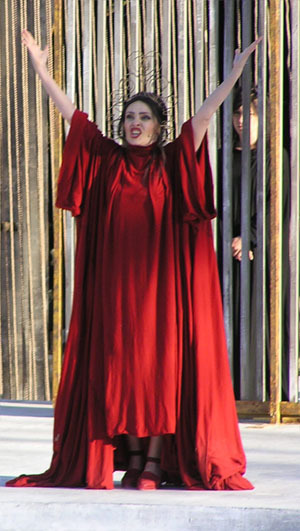 It turns out that the first mention of a red carpet can be traced back to the 5th Century BC, and Aeschylus' play Agamemnon. In the play, the king's wife, Clytemnestra, prepares the carpet as a way to set up her cheating husband to be murdered. Agamemnon walks the red carpet set out for his triumphant welcome home and Clytemnestra whacks him. And that's what you all get for cheating on me, you son of a bitch ex husbands!!!!
But I digress.

So it turns out that my psychic fear of walking red carpets is really just a repressed memory of a past life in an altered state. Wow. Who would have guessed? Now it all made sense. I swilled down the rest of my Asian ale, fixed my blood red lipstick, licked my one good fang for luck, paid my bill and headed across the street. To finally face my demons.

Four minutes later I was settled into the seventh row center of a nearly packed theatre listening to Greg Travis introduce the actors in the film, many who were now in the audience. Inspired by the fact they were all still alive and upright and that some like the director's sister, Stacy Travis, had just recently been on the TV show Mom with Anna Faris and was still beautiful, well that made me feel really good. 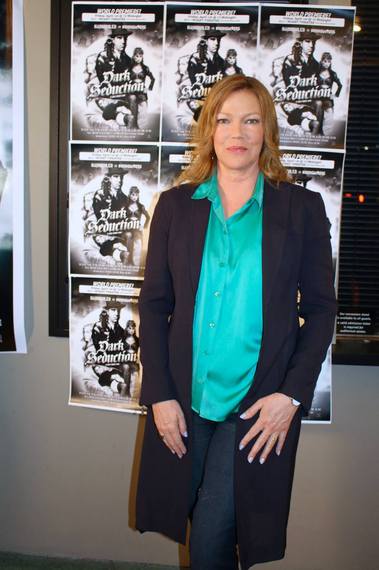 And spotting comedian and actor Rick Overton (someone I'd been following on Facebook for a year because he just seemed like a really cool dude who supported Bernie Sanders but no, I'm NOT stalking him. I don't stalk; I peep) any way, he was so absorbed in what Greg Travis was saying, it made me think how making a film that no one has ever seen before really bonds people. 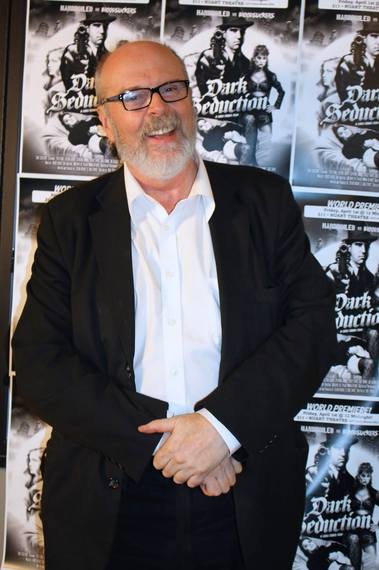 And listening to G.T. tell his tale of perseverance and hard work and never giving up even when the footage had been lost for decades was genuinely inspirational. It made me want the movie to be really terrific and I wished good karma for all the folks involved. And also for myself for actually making it to this point and on time despite all the obvious setbacks. 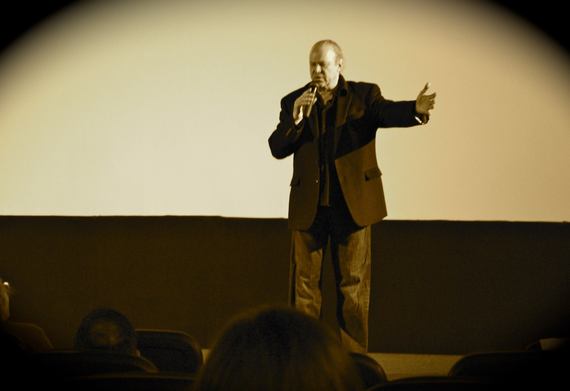 Then I just sat back and relaxed as the lights dimmed in the beautiful Nuart Theatre, the black and white opening scene flickered on the screen and the laughter began. It was kind of magical really and what made me want to be there in the first place. A real movie made on 16mm film with memorable characters in a funny, kooky, midnight movie kind of way. I felt like a kid again at the first matinee I ever saw at The Loring Hall Theatre in Hingham, Massachusetts when I was 7 years old, and there on the big screen blood poured out of a bathroom faucet. It made me feel really good that my tastes had not changed that much.

I don't want to give too much away. Ambivalence is the height of sophisticated filmmaking. All I really know is if a movie can make that many people laugh for a few hours at midnight in the heart of the world's most famous movie-going city and get people to forget all the problems of the world for two hours without a single special effect, how cool is that? I'd see it again in a heartbeat. With or without my fangs.

There was a lot of applause and cheering at the end of Dark Seduction because it just made everyone feel good and laugh so much, all at once and all together. 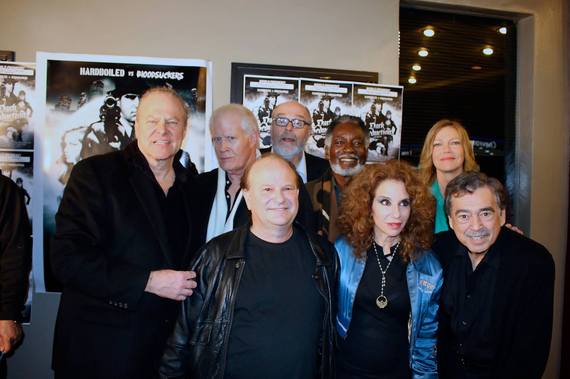 And to make it all perfect, after it was over and people were milling around in the lobby, Rick Overton himself gave me a big hug and a smile. And those inner demons? I think the lesbian vampires got them this time around. Because, after all, that is exactly what lesbian vampires are supposed to do, right? 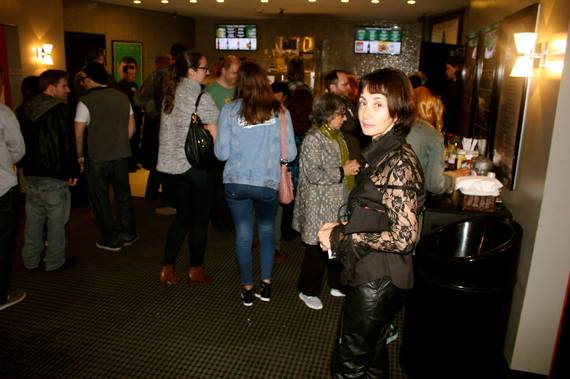