Alongside the recent press about a new Gilded Age of art economics (replace Carnegie and Frick with Arnault and Walton) there is a movement of socially engaged art that is gathering momentum. While some art works reach sales in the nine figures, Kansas City artist Sean Starowitz asks us to, "re-think the offering between commodity and experience."

Starowitz is a 2014 recipient of the Charlotte Street Foundation award for his work as an activist and artist. A wide range of projects includes BREAD! KC, a microfunding concept based on the Sunday Soup Network. Offering a communal meal for a small donation, participants are introduced to artists from the community who discuss their projects. Diners then choose which project they wish to fund with donations received at the door; a successful concept that has generated over $15,000 in three years.

Byproduct: The Laundromat, includes storytelling, performances, and discussions in a Midtown Kansas City Laundromat and Fresh Bread, a pop-up bakery which travels to food deserts in Kansas City. Another project is The Dialogue Lab: Impossible Madison, a collaboration of students from the Madison Art Academy, among others, "creating a responsive exhibition investigating the reimagining of the city of Madison, Indiana, through design, public engagement, and interactive installations." One student called Starowitz' work a "non-transactional experience."

He and a growing number of artists are looking to socially engaged art practices, questioning the idea that a fulfilling life and career based upon economics and collectability as their sole rubric demands re-examination.

Julia Cole, KC-based artist, educator and community activist who manages a socially engaged grants program with the Charlotte Street Foundation remarked, "I think that defining artistic success in the more traditional sense - gallery exhibits, museum shows, art fairs, collections... - clearly impacts the kinds of artists who will be drawn into a socially engaged practice...Most work in the SoPra (social practice) genre does not fit this 'success' profile." It is a case of committing to communal impact that accompanies artistic fulfillment.

Starowitz' ideas are borne of food, including how we source, fund, grow, buy and eat it.

People will do almost anything to alleviate their anxieties, accept any distraction (the internet on which you read this, television, pharmaceuticals). And food sourcing plays a major role in these anxieties. Socially engaged art, acting as both a truth-teller and a keyhole help cushion the impact towards what is becoming a moment of great decision-making affecting future generations. Environmental, political, population control and healthcare are some of the issues that all have a basis in food growth, consumption and distribution. Words like social engagement, sustainability and community are frequently bandied about as buzz words, and their inclusion in the lexicon of corporate ideology may dilute their importance, but are still words with validity nonetheless. Artists like Starowtiz challenges these paradoxes, putting ideas into actions, tasking his community to becoming equally involved.

"He's the type of person that willingly jumps into difficult conversations about social issues. He changes the focus of conversation from the problem to the solution." Says Erin Olm-Shipman, a longtime partner of BREAD! KC and Collections Manager of The Collectors Fund, a rotating art program in Kansas City.

Peter Sellars is an American theatre director and UCLA professor who recently invited Starowtiz to talk with his students about the role art plays in a "green" economy. In a phone conversation we discussed ideas of a newly reconfigured economy needing to begin at the grassroots level. Says Sellars, "Kansas City is the frontier of where the action is...people actually need a working alternative...democracy should not be inhibited by over-centralization."

The word 'local' kept popping up in our conversation and how its meaning corresponds to the geography of Kansas City, or even Los Angeles, places where there is little centralization. This moment right now, says Sellars, is an exploratory time that allows working models to be tested. Sellars pointed out, "We need to work out and implement expertise...(and)this will take a generation."

These ideas are already taking root and bearing fruit. Says Starowitz; "The fact that BREAD! KC has (consistently) sold out is a telling thing...I think it will hopefully inspire the next generation of artists to work in more radical community engaged and minded contexts."

Political and social boundaries are sometimes crossed. At one Byproduct event, artist A. Bitterman discussed a controversial billboard project that dealt with narrative historical culture between himself, arts facilitator Moses Brings Plenty and moderator Jose Faus.

How do socially engaged projects impact our communities, including bridging zip codes that can often be split along racial lines? And who is a core demographic? Starowitz remarks, "I would say non-art oriented individuals, the everyday (citizen), and art folks. But Kansas City is hyper-segregated and I truly believe the arts can navigate that space, (establishing) conversations and (facing) issues with real impact and change..."

Why hasn't Starowitz embedded these projects in neighborhoods that could be more in need of it than others? It's a matter of implementation and organic growth rather than seeking out exploitative environments.

He is not alone in bringing social engagement to a local culture that wants change. Darryl Chamberlain and his ongoing campaign of The Artists for Life Project and artist, poet and the previously mentioned Faus are among several community-minded artists seeking change slowly and organically within Kansas City.

Faus too, is taking a broad approach to balance the personal and the communal, combining studio time with community engaged work. A founder of the Latino Writers Collective, a group that addresses the shortcomings "such as the lack of visibility for Latino writers in the area. It has morphed into a national network of engagement with other like-minded groups."

Faus' work on Token Conversations at The Laundromat with (independent curator) Christian Frock and Sean was another "example of the nexus of the personal and communal - conversations as a medium for exploring critical issues, both personal and social."

Social engagement and organization within communities are an imperative to its growth and relevance. Cities can, and for the most part, are, considering the importance of the type of work Sean and others are creating and start adopting these practices into their everyday lives. These changes are plausible and necessary. Olm-Shipman says, "It helps keep the arts relevant" and accessible to everyone.

Art is not merely a financial investment. Socially engaged art practices incite changes and helps defines the culture once the community becomes a part of it. One cannot be passive and this work encourages participation. Direct engagement is a true democratic model of tangibility and influence that yields change where it's needed most: the places where we live. 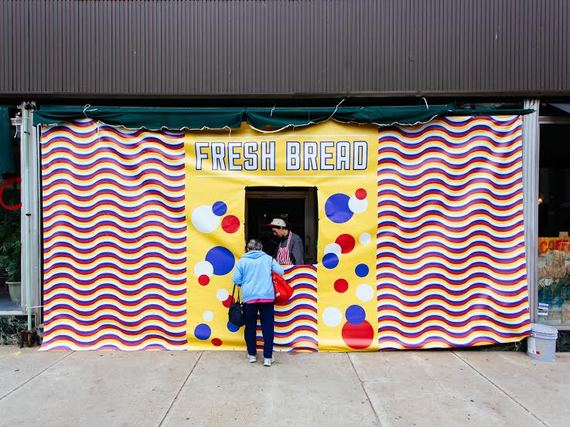 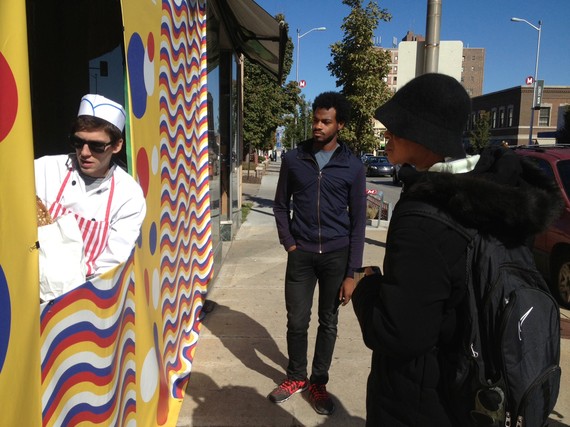 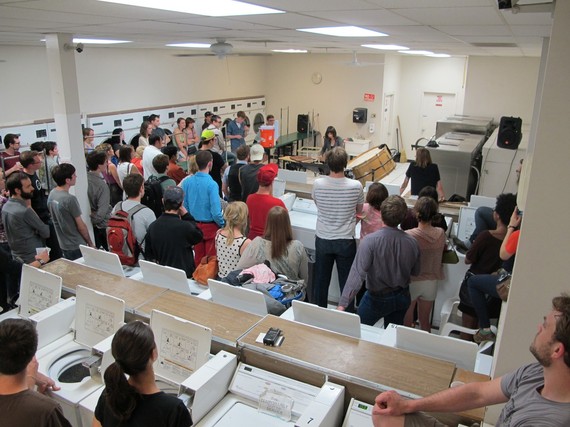 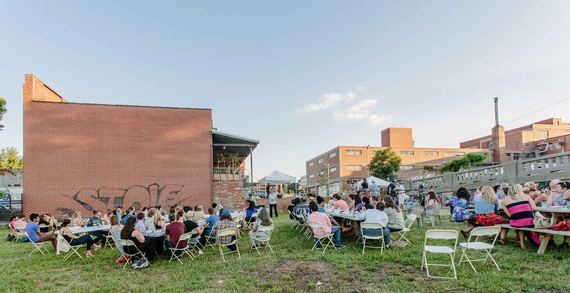 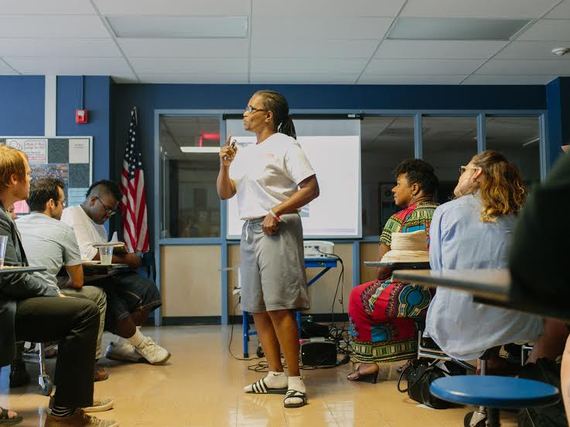 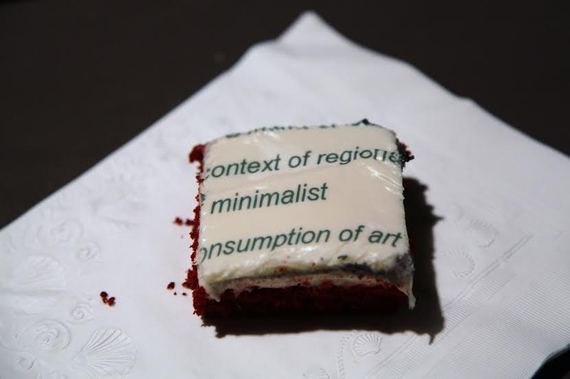