The simplest but least useful way to think of poetry is as two types: good or bad. Yet for those willing to look deeper, there is much to be gained from attempting to understand and appreciate the wide and varied landscape of contemporary poetry.

This gives rise to not two or three but actually seven different types of poetry, as shown in the following diagram: 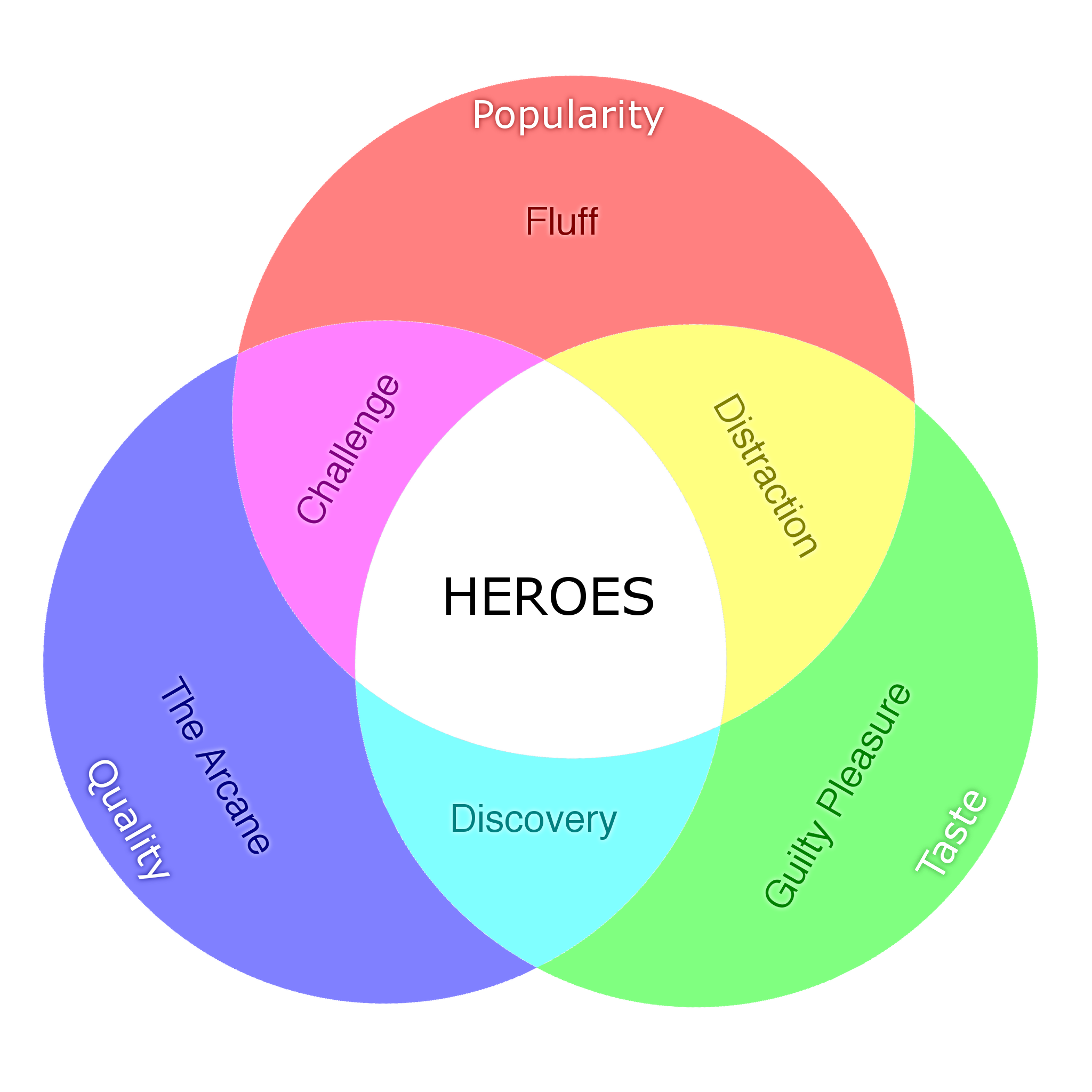 Fluff -- that which is popular, but you can't guess why--being neither of high quality nor suited to your taste. These poems are generally dismissed with a, "What is the (poetry) world coming to?" roll of the eyes.

Guilty Pleasures -- those poems or poets that are of your particular taste, but which you must acknowledge aren't exactly of the highest quality, nor are they widely known. Think of the poetic equivalent of a boy band you adored as a tween.

The Arcane -- You will come across, from time to time, those works of high quality which are neither your taste nor widely known. They give you pause, if only for a moment of head-scratching.

Next, at the intersection of two different traits:

Distractions -- Simply put, that which lacks quality is a distraction to the ever-evolving poet-reader. Even though it may suit your taste, and others know about it as well (making it a less-guilty pleasure), it will not necessarily teach you much about writing, or leave you changed for having read it.

Discoveries -- That which is not yet popular, but both suits your taste and has recognisable quality, presents an opportunity for discovery. For every school and taste around there are numerous discoveries yet to be made in the plentiful marketplace of poetry. Doing so can make you feel like you have just won the lottery.

Challenges -- It takes a mature attitude to acknowledge that quality works exist, which are reasonably well-known, and which one simply does not like. It is just as valid for them to exist as it is for you to dislike them. Yet approached with an open mind, these can be seen as challenges. That which is outside your sphere of taste provokes you, perhaps even calls into question your very definition of poetry. Taken with an open mind, though, this can lead to growth.

Finally, in the dead centre are those poets who are producing work of recognisable quality, which you like, and who have achieved the seemingly impossible--recognition for that good work. These become our heroes--the poets we look up to, admire, and emulate.

As you can see, the actual poems and poets an individual would choose to fill in these seven spaces will vary considerably from person to person. One reader's hero could well be another's challenge. Yet we needn't be fractious about it.

Poetry is largely a matter of taste. The proliferation of awards, critics, and publications might mistakenly lead us to believe otherwise. In the end, though, they operate via gatekeepers who are attempting to bolster a mix of their own discoveries and their heroes upward along the axis of popularity. This is why they make for a poor, or at least inconsistent, marker of individual progress.

Better to revisit one's heroes for inspiration, rise to the challenges of difficult new work, and make exciting discoveries of ones own. Read widely with these intentions in mind, and you will soon be running circles around your peers.

This article first appeared on www.robertpeake.com