The sexual revolution started in the late fifties in Paris with two movies and two big movie stars: Brigitte Bardot in And God Created a Woman in 1956 and Jean Paul Belmondo in Breathless in 1959.

Brigitte had real sex (to completion) on camera with her co star and later lover, Jean Louis Trintignant, while her husband Roger Vadim directed the scene. Free love was born. The Queen of the Sexual Revolution was Brigitte and women everywhere copied her hair, her makeup and her first bikini that she barely wore at Cannes and the hot pants she wore with boots on the streets of Paris. 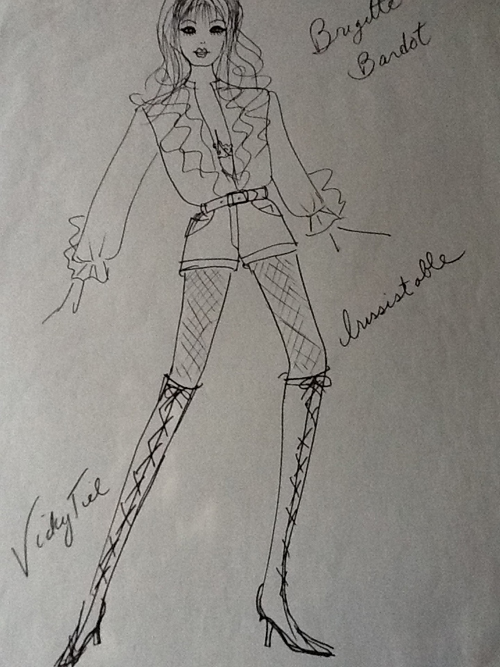 Earlier in America, Jane Russell had showed her bra-less big breasts in The Outlaw and Marilyn Monroe had brought naive sexuality to the screen in How to Marry a Millionaire and Some like it Hot both stars breaking grounds in Hollywood but it was the French New Wave movies that brought modern sexuality to the screen with empowered women, women with their own money, women choosing their own men on their terms and dumping their men as they pleased. WOMEN CHOOSING THEIR MEN was a new, new thing on earth, new since 30,000 -3500 BC when Goddess Culture Women ruled the planet.

Jean Seberg at the end of Breathless copies Belmondo's smile as she fingers her lips. She claimed feminine power for all of us with her smirky smile " I Got Him Good", and women of the sixties freed themselves up to make their own money and sleep with whomever they desired. The good virgin bride, the handpicked woman, the desired image of marriage became antiquated in the Western world. Women now had a choice of Any Man They Wanted as Brigitte Bardot toyed with three gorgeous men in And God Created a Woman.

No wonder the Muslim Brotherhood's powerful book , In the Shade of the Koran by (Sayyid Qutb) jumpstarted Fundalmentalism in Egypt in 1965 shortly after the birth of the mini skirt. Conservative religious men saw our mini skirts and see thru tops and no underwear( Brigitte again) and sadly reacted badly. They saw their over three thousands of years of power over women seriously threatened. Thus began the division of the women of earth , sexy and free or seriously covered up.

I was just in Paris to cover summer fashion when I was invited to the Brasserie Lipp by my press agent buddy, Yanou Collart ."Hurry up, come over".

To my surprise, my childhood heart throb was at our table, Jean Paul Belmondo, in all his glory, holding court at Lipp, where tourists and lesser souls are waved upstairs away from the French elite . There sat Jean Paul at the Table du Roi. 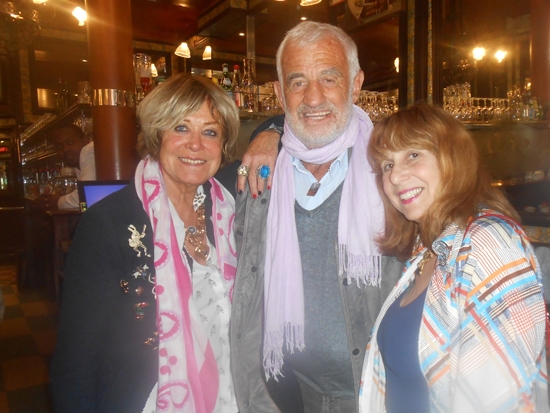 We sat at the King's Table at Lipp on the far right wall from the entrance where I once sat next to Yves St Laurent and Pierre Berger, the year YSL retired.

Today I said to Jean Paul as I sat down, "I have dressed all your women except your wife." He laughed .

It was actually Belmondo's great love, Ursula Andress who taught me my first lesson on the importance of a dress to a romance. ( I write about this lesson in my memoir, Its All About the Dress).

I was the costume designer of What's New Pussycat, dressing Ursula in my first catsuit design in grey snakeskin, when she asked me to dress her for a date. We were in Paris in the fall of 1964.

"Ma Vicky, cherie, I need a dress to make a man fall in love with me. I am going out with Belmondo tonite. " But Ursula he is married ", I say stupidly and she gave me a look like I was crazy.

I took three yards of white silk jersey and draped it around her nude body and attached it at her neck with a diamond brooch. She went out dressed that way with silver slippers, full commando.

The following morning, I went by Ursula's hotel on the Quai D'Anjou to take her to work and she was lying undressed in bed. She smiled happily at me and declared as she stretched catlike across the bed, "He is mine! " Il est a Moi!

At that moment, I learned the power of a dress. France's leading actor left his wife and children for a woman in my white draped dress. 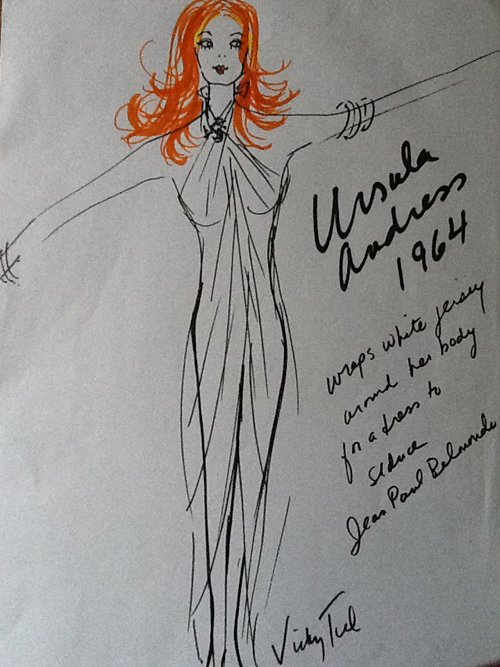 Vicky Tiel began designing clothes 40 years ago in Paris and still owns a boutique there. See Vicky and her new collection on HSN and online. Her couture is available at Bergdorf Goodman and Neiman Marcus, and her perfumes are carried in Perfumania. Her memoir, It's All About the Dress: What I Learned in 40 Years About Men, Women, Sex and Fashion was published by St. Martin's Press in August 2011.