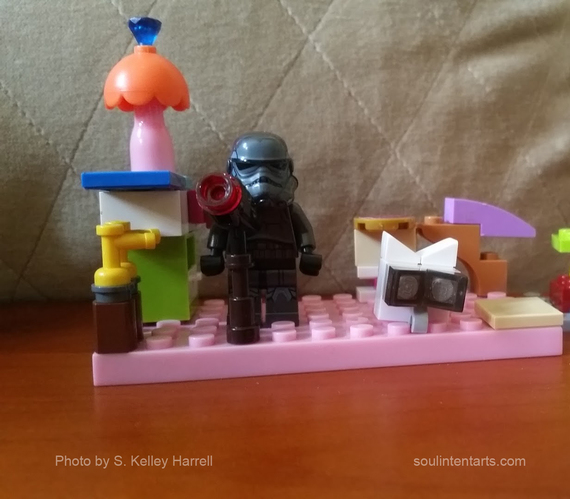 Anyone who's a fan of Star Wars and has even latent knowledge of shamanism quickly arrives at the intersection of animism and The Force. We never really know what The Force is, other than an energy field that is created by and surrounding All Things. The ability to engage the manipulate that field for good or bad becomes the story we're all drawn into. Known by many names in many cultures, The Force may be chi, ki, prana, wyrd, or life force.

In shamanism, we access life force primarily through animism, or the observation or experience of All Things having souls, all souls sharing a connection, and being able to intercommunicate with the web of all souls through that connection.

The similarity between animism and The Force isn't an accident. According to George Lucas, creator of the films, Joseph Campbell's The Hero with a Thousand Faces was a strong influence on the original Star Wars trilogy (which for those of you not in the know are the first three filmed, though not the first three in the chronology). [1] His interest in Campbell's depiction of the classic hero's journey tugged on strings of mythology and fairytales, which he incorporated throughout the films, though specifically into the life of character, Luke Skywalker. Even the name "skywalker" is taken from the shaman's task: soul travel from the body into the spirit realms.

If you don't know what happens in the existing films, read no further. This article contains no spoilers for Star Wars: The Force Awakens.

The hero's journey has been likened to that of the classic shamanic narrative, or healing story. Traditionally and even in modern settings, we observe a pattern in how shamans arrive at their role in community. This role can be comprised of many things, the least of which is a leader who serves as intermediary between humans and All Things. Specifically, shamans will an aspect of their soul to travel from the body into the spirit realm to gather information or healing for some betterment of self, other, or community. In this same way, the hero becomes heroic.

In the hero's journey, the individual is awakened through life events or some spontaneous spark, which leaves him or her unable to see or return to life the same. It could be said that through this event, the individual becomes awakened to the enlivenedness of the surrounding world, including the interconnection of self with All Things. A journey begins. This is considered the calling, or initiatory crisis. For Luke, this calling came when his family was killed, and he vowed to deliver the Death Star plans to The Rebellion.

Following the crisis is the realization that life must change to accommodate this new awareness. Nothing in life prior can stay the same. This is the personal death. Having grieved the loss of his family and former life, Luke realizes he doesn't have the skills needed to fulfill his vow. He is forced to leave his home planet of Tatooine to gain the knowledge necessary.

Upon acceptance of this personal truth comes resolution. With resolution comes the commitment to see the initiation through to the end, and allow what must change. Despite anger and grief, Luke commits to leave his home and acquire the skill and connections necessary to deliver the plans.

Along the path of change helpers are acquired. In the shamanic context, these are spirit guides, totems, Nature Spirits, teachers for what must be done to complete the initiation. At the suggestion of the deceased Obi-Wan Kenobi, Luke seeks out Yoda, the great Jedi master, to teach him to be a Jedi. He seeks the training to use The Force, which would allow him to engage animism. This transmission of wisdom from ethereal sources is the bestowal of power. Through his teaching from Yoda and otherworldly experiences with Kenobi, Luke alters his sense of reality. He comes to believe in his own power. He sees the completion of his mission as possible, and begins envisioning possibilities of applying his skills in service even after that point.

The final step in the hero's journey is for his or her community to recognize the initiation for what it is. When the individual is recognized by community, the role of shaman as servant of that community is realized. Ultimately and not necessarily in ways he wanted, Luke delivers the plans and becomes recognized as both a Jedi and a worthy champion of the greatest darkness in the realm.

Going deeper with the shamanic narrative, in servitude to community, the shaman empowers the community. S/he fosters it along its own initiation to finding personal power. In that way, a single healing story inspires the whole tribe. The entire community is healed. Luke's ability to demonstrate his training becomes the confidence upon which the rebellion is fought and won. Having brought his awareness and skill to the community, the community is reinforced and becomes stronger.

Retelling the classic hero's journey and shamanic narrative through the Star Wars series slips not just the awareness of animism into modern consciousness, but opens audiences to the potential of skywalking their own healing stories.

Learn more about animism and shamanism at Soul Intent Arts.

More:
the force awakenshealthy livinganimismshamanismStar Wars
Newsletter Sign Up
An essential daily guide to achieving the good life
Subscribe to our lifestyle email.
Successfully Subscribed!
Realness delivered to your inbox