As depicted in the Academy Award-winning documentary, The Cove, the annual dolphin hunts in Taiji, Japan, have just ended after another six-month long season, although harpooning of pilot whales will continue offshore for several more months. We now have reports from CetaBase, via the Sea Shepherd Conservation Society's Cove Guardians, of numbers for the entire killing season from Sept. 1, 2015 through February 29th, 2016. Our thanks to these two organizations for keeping close track of the continuing dolphin slaughter in Taiji, Japan. 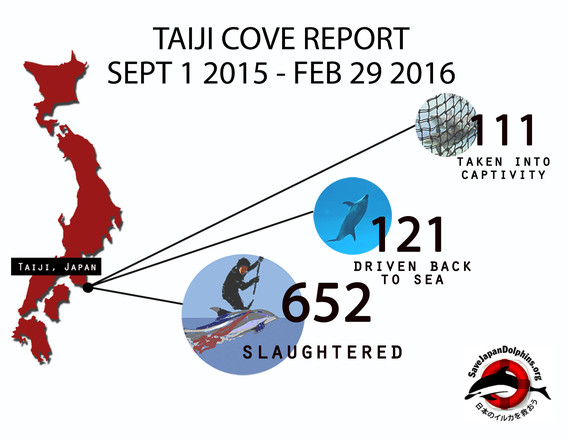 The six-month season of the Taiji dolphin drive hunts has ended at last, with the hunters reportedly ending on Feb. 29th, 2016. Last season and the season before ended a bit earlier, but hunters in Feb. 2016 went more than two weeks at the end of the month without bringing in any dolphins.

The number of dolphins slaughtered for meat this year was down to 652, a continued decline of 62% since we began our Earth Island Save Japan Dolphins Campaign in 2004. Last season 751 dolphins were killed. Our contacts in Taiji have told us the reason for the decline in catches is due to concerns about mercury in dolphin meat. (Those concerns are a result of our educational work in Taiji and the surrounding area about the dangers of mercury contamination.) However, this season, a number of days passed when the dolphin hunters could not find any dolphins, either due to bad weather or perhaps due to bad luck.

Only five species of dolphins were caught this year, with four Pacific white-sided dolphins and a handful of pilot whales. Bottlenose, Risso's and Striped dolphins provided the bulk of the slaughtered animals and captive animals. False killer whales and spotted dolphins were not caught at all. This raises the question of whether the Taiji hunters are killing off the dolphins to an extent that the populations are declining in that area. Except for Risso's dolphins, the hunters once again failed to come close to filling any of their quotas.

Unfortunately, despite the low numbers of dolphins slaughtered, the hunters are making up for the decline by catching many more dolphins for captivity. This year 111 dolphins (mostly bottlenose, but also one pilot whale, four Pacific white-sided dolphins and eight Risso's dolphins) have been caught to face a life in captivity. China's building of new aquariums and, subsequently, imports of Taiji dolphins are booming, with dolphins also likely set for export to the Middle East, Russia, and other countries actively building popular aquariums. A trained dolphin can go for $150,000 or more on the world market, far more than the Taiji hunters get for a dolphin butchered for its meat.

This is the first hunting season that the Japan Association of Zoos and Aquariums (JAZA) has cracked down on its members in Japan telling them to stop sourcing dolphins from Taiji or face sanctions. (This came about after a ten-year effort by Earth Island's Save Japan Dolphins Campaign and other organizations.) The notorious Taiji Whale Museum, run by the town government of Taiji, and the broker for most of the captive dolphins, has left JAZA. So far, no other aquariums in Japan have left JAZA, but there are many aquariums and smaller swim-with-dolphins programs (mostly set in swimming pools or even small sea pens netted off in harbors) that are not JAZA members and buy dolphins from Taiji. There is clearly a large turnover in such places as their dolphins die off, so Taiji simply provides them with another just-as-good dolphin for the unknowing tourists. There are also rumors that several other aquariums in Japan will leave JAZA in order to buy dolphins from Taiji. Our colleagues in Japan are following up on this issue.

121 dolphins were released back into the ocean after having been driven into the notorious Cove for sorting and slaughter. These dolphins are unlikely to survive well. Many are younger dolphins (smaller and so with less meat on them) that will find it difficult if not impossible to survive without their family pod, most of which would have been destroyed. Cove Guardians have reported finding the carcasses of dead dolphins washed up along the Taiji shoreline, likely dolphins that were released but later died from injuries or shock from the drive hunts. But these dead dolphins and released dolphins (as good as dead) do not count against the Japan Fisheries Agency's quotas.

The agency quotas are a joke. According to the Fisheries Agency, Taiji could have killed another 298 bottlenose dolphins, 400 spotted dolphins, and 160 more striped dolphins this season alone. The only species that the hunters came close to filling for their quota was Risso's dolphins (a quota of 256, of which 253 were actually caught, slaughtered, or kept for captivity). The Japan Fisheries Agency, which also promotes (poorly) the domestic eating of whale and dolphin meat, the illegal "scientific" whaling in Antarctica and the North Pacific, and imports of whale meat from Iceland and Norway, sets quotas that clearly do not do anything to protect the local populations of dolphins and whales.

The Taiji dolphin hunters will turn now to fishing, although they can also harpoon pilot whales through April (and sometimes longer). The next season for the Taiji drive hunts begins Sept. 1st, 2016.

Photo courtesy of Oceanic Preservation Society from The Cove documentary.